I see from yesterday’s Irish Times (see below) that PSNI Deputy Chief Constable Drew Harris is one of five candidates recently interviewed for the post of Garda Commissioner.

Don’t be surprised if the selection board plumps for the Northerner. It would be one of those ‘hands across the Border’ gestures that dovetails quite nicely with the post-Brexit political necessities. A gesture to the separated brethren and a middle finger to T. May. 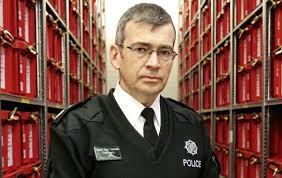 One person unlikely to extend a warm welcome to the PSNI chief  is retired SF leader Gerry Adams. Harris was Assistant Chief Constable in charge of Crime when orders were given to pursue the Boston College oral history archives for material dealing with the ‘disappearance’ of Jean McConville.

This came amid mounting accusations that Adams had given the order to send the widowed mother-of-ten to an unmarked grave on the shores of Carlingford Lough. 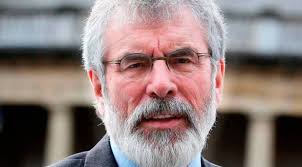 Drew Harris has a very personal reason to detest the IRA, its works and leaders.

His father Alwyn Harris, a Superintendent in the RUC, was killed in October 1989 by a booby trap bomb attached to his car – a so-called ‘up and under’ – as he and his wife were on their way to church from their home in Lisburn, Co Antrim.

His wife was not seriously injured but the policeman, who was on sick leave, died. Such booby trap bombs invariably caused terrible injuries. The IRA admitted responsibility.

Drew Harris will also be remembered for giving secret evidence at the Smithwick Tribunal in 2013 saying that the PSNI and MI5 had intelligence that the IRA in Co Louth had wanted to spare the life of accused Garda spy, Tom Oliver but when they brought their plea to a senior Provo they were turned down.

Harris was asked to write down the name of the senior IRA figure and pass it to the presiding judge, Peter Smithwick. There has been intense speculation about the identity of this Provo, who is believed to have doubled as a Sinn Fein activist.

You can read about all that here and here.

And here is the text of The Irish Times report on the selection of a new Garda Commissioner:

Five have taken part in final interviews for Garda commissioner

If an internal Garda candidate is chosen, appointment likely to go ahead in August

Five individuals have participated in the final round of interviews to become the next Garda commissioner, The Irish Times understands.

Former commissioner Nóirín O’Sullivan stood aside last September after weeks of pressure on her position. Dónall Ó Cualáin is the Acting Commissioner.

Final interviews for the role are understood to have taken place over recent days and a decision may be taken as soon as within the next fortnight.

The Public Appointments Service will make a recommendation to the Policing Authority for consideration of Government, which will accept or reject the person for appointment.

The authority and Government were both represented on the interview panel by chair of the authority Josephine Feehily and a former secretary general at the Department of Justice.

If an internal Garda candidate wins the process, their appointment would likely go ahead in August. However, for an outside candidate, a security check would be required and possibly a work permit.

Those additional steps in the process would mean the next commissioner would be appointed next September at the earliest.

That would mean the commissioner would be appointed around the same time the Commission on the Future of Policing in Ireland reports to Government after a year-long review process.

The commission had previously warned that the new Garda commissioner should not begin until its work was concluded next September.

Deputy Chief Constable with the Police Service of Northern Ireland Drew Harris is understood to also be in the final five.

The Government agreed last December the new Garda commissioner would be paid a salary of €250,000 a year, compared to the €180,000 paid to Ms O’Sullivan.