Trump And North Korea – Soulmates Under The Skin

This September 2016 article on the US neo-Nazi website ‘Radio Aryan‘ suggests Donald Trump and Kim Jong-un’s North Korea may have more in common than most people imagine: 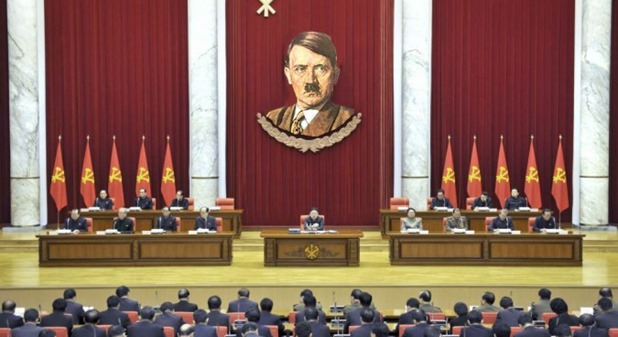 Matthew Heimbach presents a solo edition of The Daily Traditionalist centred around some little known information about the hermit kingdom of North Korea. It is their independence day today and although most think they are Communist, they are actually closer to Nationalist. Matt has been reading a book called ‘The Cleanest Race’ which claims that the DPRK really derive their ideology from National Socialism and Japanese Fascism.

North Korea is extremely militaristic and insist that every member of their nation must be prepared to lay down their life for the rest. Their constitution does not have one mention of Communism in it and they have been moving further away from Marxism over the last few decades. They believe in racial purity and even instituted laws to preserve it during the initial leader Kim Il Sung’s reign. He had been prepared to work with the other anti-capitalist countries, but once the East German workers over there started to inter-marry with the Koreans, he expelled all the bastard children and banned miscegenation outright.

When American prisoners of war desired to stay there after the war, Kim Il Sung even imported wives for them from the Ukraine to prevent any temptation to mingle blood with the Koreans. The celebration of their racial purity is to be found everywhere in the country, with depictions of children all looking the same and Kim Il Sung always being pictured with snow, as they treasure the whiteness of their skin and see snow as a symbol for purity.

Not every policy of the DPRK is good and they do use some symbols of the enemy, but they are a nationalist regime and they do have a functioning ethno-state that has succeeded in standing up to the combined might of Jewish Capitalism.

Best wishes to Best Korea on their independence day.

One response to “Trump And North Korea – Soulmates Under The Skin”