The Operation Kenova team has apparently arrested Freddie Scappaticci (72) at a location somewhere in England. The former head of the IRA’s Internal Security Unit was a spy in the pay of the British Army’s Force Research Unit (FRU), which handled ‘Scap’, as he is widely known, in alliance with MI5, who had an officer stationed in the FRU’s Thiepval barracks HQ, and the RUC Special Branch. 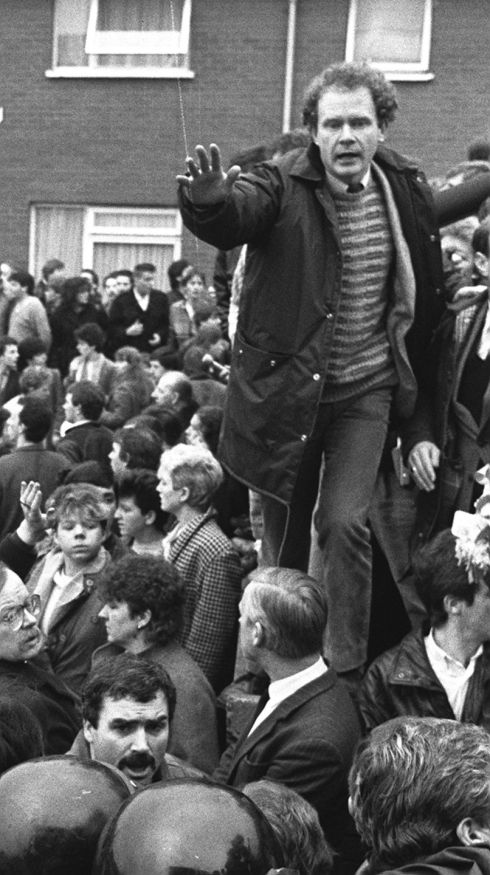 An extraordinary photo of Martin McGuinness and Freddie Scappaticci (dark moustache at bottom left) protesting the RUC presence at the funeral of IRA member Larry Marley. Marley had been assassinated by Loyalists and his family suspect he was set up by an IRA informer. Scappaticci’s role as an informer was known at this time only to British intelligence.

Scappaticci was responsible for the deaths of an unknown but decidedly large number of people some of whom may have been informers and some who were probably not.

His story covers what was probably one of the darkest and dirtiest chapters of the British state’s secret war against the IRA in which the republican movement’s top spycatcher was in an ideal place to subvert his own comrades while giving British intelligence an unprecedented opportunity to manipulate IRA policy and personnel.

During that enterprise it is more than likely that British intelligence allowed Scappaticci to kill people and may even have connived at others’ deaths in order to promote their intelligence goals. It is hard to understand how Scappaticci was employed by the British without at least a blind eye being turned to what he did.

In that capacity he was in a position to help British intelligence advance the careers of other informers, halt or divert the careers of those who were not and, arguably, help shape IRA military and political policy. He was probably the most valuable British spy of the Troubles. The British general who was GOC during some of this time, Sir John Wilsey, described Scappaticci’s recruitment as a major intelligence breakthrough.

Peter Jones, who is credited with recruiting and running Scappaticci for the British Army’s Force Research Unit, pictured after his retirement, on his graduation from college. Will he and his colleagues in FRU, MI5 and RUC Special Branch be investigated by Operation Kenova?

It is likely that the handling of Scappaticci was known about and discussed at the highest levels of the British government, by members of the Joint Intelligence Committee whose reports are read by the British prime minister. Did Margaret Thatcher or any of her successors know about Scappaticci and if so, how much were they told?

A number of other questions follow from Scappaticci’s arrest: how far will Operation Kenova take the investigation? Will it stop with the arrest and arraignment of Freddie Scappaticci – as essentially happened in the case of Brian Nelson – or will the investigation dare to delve deeper into the darker corners of British intelligence?

One question in particular screams out for an answer: how many people, not just IRA members, were allowed to die to preserve Scappaticci’s cover or to enable British intelligence to advance an agenda?

Readers of this blog will be forgiven if, like this writer, they are sceptical about the chances of Operation Kenova probing any deeper than Scappaticci himself. Hard scrabble experience can do that to you. But we shall see.

In the meantime we should pause for a moment and recall that it was an ex-British soldier, a former member of the Force Research Unit, Ian Hirst who, using the pseudonym ‘Martin Ingram’, exposed the Scappaticci story to daylight. Without his bravery the Scappaticci story would have been buried as deeply as many of his victims.

Efforts by the British Ministry of Defence to silence Hirst led to a court injunction forbidding him to use or promulgate Scappaticci’s code name, ‘Steak Knife’. So instead he called ‘Scap’ ‘Stakeknife’ and the media followed suit. ‘Scap’s’ real code name though was ‘Steak Knife’.