The article below is one from the archives which might prove interesting sometime in the future; not least it helps provide an insight into the structure and training methods of British military intelligence, the people who recruited and ran Freddie Scappaticci.

Written by David Lister and Ian Cobain for The Times newspaper in May 2003, the article reports on events just after Scappaticci was outed as a British double agent working inside the IRA’ spy-catchers cell, the Internal Security Unit.

The reporting pair claimed in this piece that Scappaticci was being debriefed by his handlers in the Force Research Unit at a former World War II US air force base at a place called Chicksands in Bedfordshire, some 30 or so miles north of London. 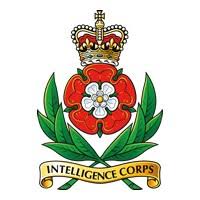 The crest of the Military Intelligence Corps

But they failed to fully appreciate the significance of the Chicksands connection.

Chicksands is not just the site of a former American airbase but has been, since 1997, the headquarters of British Military Intelligence. It took over that role from the training school at Ashford in Kent.

The Joint Intelligence Training Group, under whose umbrella also shelter the British Army’s Intelligence Corps and the Defence College of Intelligence, is based at Chicksands and churns out specialists of the sort who populated the ranks of groups like the Force Research Unit, who in turn recruited and ran agents like Freddie Scappaticci.

Chicksands Priory – the HQ of the British Military Intelligence Corps

Chicksands has been at or near the centre of British intelligence activity since the second world war as this account details:

Chicksands was the site of RAF Chicksands, an RAF signals collection station during and after the Second World War; during the war, it was one of the “Y-Stations” which sent intercepted signals to the Government Code and Cypher School (GC&CS) at Bletchley Park, where ciphers and codes of several Axis countries were decrypted, most importantly the ciphers generated by the German Enigma and Lorenz machines.

Chicksands is also the site of the British Military Intelligence Museum.

So, we can safely say that Chicksands is the spiritual and temporal home not just of British Military Intelligence but of the Force Research Unit (FRU), and was an appropriate place for Freddie Scappaticci to undergo his debriefing. 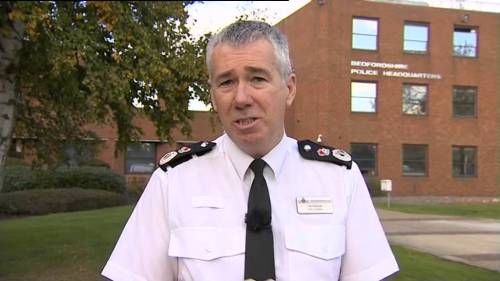 Jon Boutcher, Chief Constable of Bedfordshire who heads the probe into Freddie Scappaticci

Chicksands is in Bedfordshire, and is situated about ten miles from Bedford, the county town, and about the same distance from Kempton, where the Bedfordshire police have their headquarters.

The Chief Constable of the Bedfordshire police since 2015, and Assistant Chief Constable since 2014, is Jon Boutcher, who is also heading the probe into Freddie Scappaticci, who according to the report below, was debriefed at Chicksands.

At least Chief Constable Boutcher won’t have far to travel to talk to the people who ran Freddie Scappaticci.

Stakeknife is ‘under guard at old Home Counties airbase’By David Lister and Ian CobainTHE man unmasked as Britain’s top spy inside the IRA was believed to be under military protection last night at a former US airbase in the Home Counties.

Despite claims by Sinn Fein that he was still in Belfast, Alfredo “Freddie” Scappaticci, codenamed Stakeknife, was expected to spend the first night of his new existence at the former base at Chicksands in Bedfordshire.

The base, home to Britain’s Defence Intelligence and Security Centre, is one of the most secure military installations in the country.

Mr Scappaticci is expected to be housed at a 12th-century priory there, an intimidating building that is said to be haunted by nine ghosts, including a suicidal baronet and a nun who was forced to watch her lover’s execution before being sealed alive in a wall.

He is expected to spend several weeks being extensively debriefed by his army handlers at Chicksands, which was an RAF base before being taken over by the US Air Force. It was used by America’s National Security Agency as a listening post during the Cold War.

Those debriefing him may include Captain Margaret Walshaw, who handled the notorious loyalist agent Brian Nelson between 1986 and 1990 and now trains army intelligence recruits at Chicksands. Mr Scappaticci, who will be a marked man for the rest of his life, will then be given a new identity and relocated.

His exposure at the weekend followed a 25-year career inside the IRA, rising to become a member of its general headquarters staff and deputy head of its notorious Internal Security Department. A trusted friend of Gerry Adams and some of the IRA’s most notorious figures, he has been linked to as many as 40 murders, including those of other army informers and a 66-year-old pensioner who was allegedly sacrificed to protect him.

Although intelligence sources insisted that he was safe in England, Sinn Fein said that his family had been in contact to say that he had not left Belfast. It was even rumoured that he was to call a press conference to answer the allegations.

Nobody answered the door at the family home, a modest semi-detached house in Andersonstown in West Belfast, where the man known as Stakeknife lived an inconspicuous life with his wife, Sheila, and several children.

A friend of his wife said that it was highly unlikely that Mrs Scappaticci, a deeply religious and nervous woman who worked as a tea lady at the local church hall, knew about her husband’s double life. She is on a pilgrimage to the shrine of Our Lady of Fatima in Portugal and is expected back in Belfast later this week.

One neighbour said that Mr Scappaticci’s lifestyle did not suggest he was earning up to Pounds 80,000 a year from the Ministry of Defence. “He was a builder, he drove an ordinary car and built a modest extension on the back of his house a couple of years back. They were good neighbours. It’s a total shock,” he said. One military intelligence source told The Times that in the late 1980s the agent was so concerned for his safety that he moved temporarily to Dublin. According to the source, the RUC was at the time trying to manoeuvre one of its own agents into Mr Scappaticci’s position, a move that might have exposed him.

A former member of the Army’s Force Research Unit challenged MI5 evidence to the Saville Inquiry that Martin McGuinness had fired the shot that led to the Bloody Sunday killing of 13 civilians by paratroopers. The man, using the pseudonym Martin Ingram, said that he had seen documents revealing that Mr McGuinness had been under surveillance at the time and no mention of him firing a shot.

2 responses to “Scappaticci – The Chicksands Connection…..”