Like nearly everyone else, I cannot say for sure what motivated Sinn Fein West Tyrone MP, Barry McElduff when he placed a loaf of Kingsmill bread atop his head during a trip to a supermarket, got a friend to video it and posted it on Facebook or wherever.

But given the date the video appeared, on the 42nd anniversary of the massacre, it is difficult not to believe that the IRA killing of ten uninvolved Protestants at a bogus vehicle checkpoint near Bessbrook, Co Armagh was not, as they say, uppermost in his mind when he strolled through the supermarket.

But what has been striking about the reaction and media response to McElduff’s stunt, at least to my mind, has been the complete absence of context alongside a failure to understand its deeper meaning.

And it is that context and meaning, at a time when hostility between Sinn Fein and the DUP is at its sharpest for a decade, which add significance to McElduff’s behaviour. 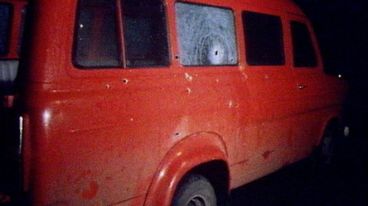 The Kingsmill massacre did not happen in a vacuum but was a response – a classic Provo response, I would argue – to a burst of Loyalist killing which had claimed the lives of six uninvolved Catholics from two families – three in each family – killed by the UVF in south Armagh and south Down a day before Kingsmills happened.

The killings of the Catholics – members of the Reavey and O’Dowd families – was claimed by the UVF but the IRA hid its role in the Kingsmill massacre behind a bogus nom de guerre, the Republican Action Force.

That, of course, fooled no-one, least of all the Provo base who, truth be told, welcomed the IRA’s over reaction and saw it as an effective way of stopping, or at least curbing, Loyalist killings. Less an eye for an eye and more two of your eyes for every one of ours. And this, in 1975-76, during the worst years of Loyalist violence against Catholics.

The Kingsmill approach became the favoured grassroots Provo answer to escalations in Loyalist violence. So when, five years later almost to the day, UDA gunmen riddled Bernadette McAliskey and her husband Michael with bullets at their isolated cottage near Coalisland, Co Tyrone, the IRA’s response was immediate. 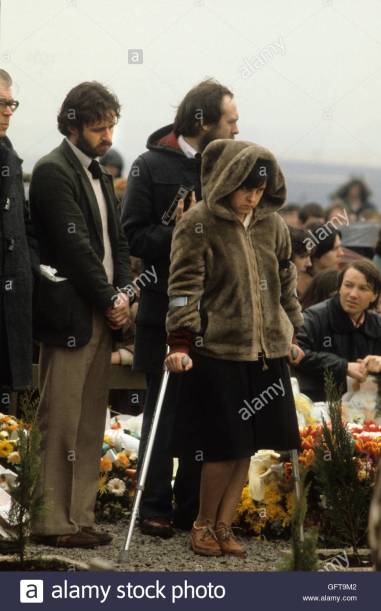 Bernadette McAliskey on crutches after surviving a UDA assassination bid

Three days after the McAliskey shooting, IRA gunmen drove to the Middletown, Co Armagh home of the former Unionist Speaker of the Stormont House of Commons, shot dead 86-year-old Norman Stronge and his 48-year son, James, and burned their mansion, Tynan Abbey to the ground.

A bloody and brutal message was sent: ‘try to kill our leaders and we will kill more of yours, and what’s more, we will make sure the job is done’. As my long term readers will know I have long argued that the Provisionals were more rooted in the Irish Defenderist tradition of 1798 than the republican one; the Kingsmills and Stronge incidents were classic examples of that in action.

The IRA’s national leadership’s decision to endorse and even encourage such local responses was of course full of significance; it went to the circumstances of the Provos’ birth, when Belfast republicans broke away from the mainstream in protest at the failure to protect Catholic Belfast from Loyalist mobs in August 1969.

Equally, it was therefore of even greater significance when, during the peace process, that approval was withdrawn and local units of the IRA forbidden from engaging Loyalists in such retaliation. 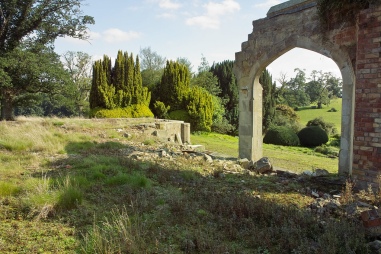 The ruins of Tynan Abbey, burned by the IRA

That was the story in Tyrone during the late 1980’s and early 1990’s as the peace process gathered steam. As Loyalist killings and near killings of republican activists intensified, as UVF squads seemed to roam the county at will, local IRA units demanded action from their leaders.

But their warning, that if the IRA failed to nip these killings in the bud, with a Kingsmill or Stronge-type response, then republicans risked being overwhelmed, was rejected.

Tyrone IRA activists were told they had to target the UVF killers involved and no-one else, and of course, that proved to be next to impossible. And UVF killings increased.

The deeper message to places beyond Tyrone was unmistakable. The Provos, at least at leadership level, were changing; old ways were being left behind, new ways, viz the peace process, were being embraced.

Arguably, we are seeing in Barry McElduff’s suspension by his Sinn Fein leaders a sort of re-run of that episode in Tyrone’s troubled history.

Is it stretching things too far to see McElduff’s video in the context of the current stalemate in talks between Sinn Fein and the DUP, a deadlock marked by rising sectarian acrimony?

If not, then McElduff’s loaf of bread carries a subtle deeper meaning: a political version of Kingsmills is the only way to deal with obdurate Loyalism. And his suspension from Sinn Fein then, is equivalent to the rebuff delivered by the IRA leadership to Tyrone republicans in the 1980’s.

It will be interesting to see how this all works out. I would be especially interested in knowing how McElduff’s stunt has gone down in places like east Tyrone. I wouldn’t be at all surprised if the answer was ‘well’.

You will recall – and so will many who will affect to remember no such thing – that Kingsmills was quite popular with many – I’d say most but there’s no way
of verifying that estimate – supporters of the IRA, including the overwhelming majority of members of Sinn Fein. The argument you mention – that this was the only language sectarian Loyalist killers would understand – was routinely advanced. I heard it scores of times, in Derry, Belfast and Dublin. Adams, O’Neill and the rest of them are well aware of this aspect of the matter.

That said, it should also be said that when it comes to giggling and gloating about the killing of people of a different religion, the Provos have never been a match for the Loyalist paramilitaries.That doesn’t excuse McElduff or SF. But it points up the fact some of the Loyalists, including members of the DUP, who have been caterwauling about McElduff’s sectarian stupidity are liars, frauds and abject hypocrites.

It’s widely said and it’s probably true that there’s no point calling another NI election because the same two gangs of,useless galoots would be put back in again. But maybe we should find out. Deep down, and maybe not that far down, and despite the apparent contradiction, I reckon the people of the North are better than the politicians they elect.

If I am wrong about that,, what’s there left to say?

I look on your works ye midgets, and despair.