Understanding The Unrest In Iran

This is an effort to explain what is happening in Iran that is getting next to no air time in the West, and certainly not here in the US where the unrest is being seen almost exclusively in terms of internal Shiite politics. This other view, which comes from the left-wing Australian outlet, Red Flag, says the unrest has a lot to do with Iranian government neo-liberal economic policies, especially privatisation, which are sharpening class tensions and reducing living standards for working class Iranians: 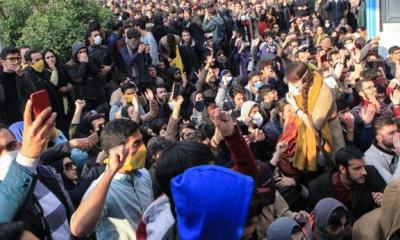 What began as a small protest in Mashhad, north-east Iran, against price rises, high unemployment and other economic grievances has spread across 65-70 towns and cities around the country.

Workers and the poor have flooded the streets.

The chants and slogans within a day turned against the regime, against both moderates and hardliners, but with a focus on supreme leader Ali Khamenei. “Death to the dictator!”, “Death to Khamenei!” and “Death to (president Hassan) Rouhani!”, among other anti-government chants echo across the country.

In some cities, there have been protests of up to 50,000. In others, pockets of thousands gather in various suburbs, trying to beat back the security forces and connect with each other.

Ahvaz, the capital of Khuzestan province in the country’s south-west, has a predominantly Arab population subjected to severe repression and the object of racial oppression for decades. Eighty thousand protested there; the police station was razed. There had been a week of protests here earlier last year. The people had warned the government that, if their grievances were not addressed, there would be an uprising.

In many cities, workers have stormed local government buildings and taken over various institutions of the security forces, burning down police stations, overturning police cars and setting ablaze police motorcycles.

Cars owned by the rich, some banks and other signs of affluence have been attacked. Across the nation, workers are ripping down posters of the supreme leader and burning them with other symbols of the regime.

In Izeh, Khuzestan province, many of the 120,000 inhabitants have hunting rifles. The people have taken over the entire city.

Tehran, the national capital and largest city, hasn’t erupted in the way other cities have. In part, this is because the working class is more affluent, but it’s also because the repression is a lot more severe. Nevertheless, there have been many pockets of hundreds of people in the suburbs protesting and battling the security forces, trying to connect with each other and merge into centres such as Revolution Square.

Karaj, Iran’s fourth largest city and an hour west of Tehran, has a predominantly working class population, many of whom commute to Tehran daily. They are protesting in their thousands, smashing the windows of state buildings and setting fires in the streets. They have been met with extreme repression but show no signs of backing down and are battling it out with the security forces.

Students at various campuses in Tehran have been protesting, especially at Tehran University, and have been met with severe repression. The student demonstrations are left wing, and radical slogans such as “Smash the state!” are being chanted. Student activists who identify as Marxist are taking the lead, side-lining the moderates and hardliners, which were the dominant forces on the campuses during the 2009 Green Movement, which arose after Mahmoud Ahmadinejad’s re-election as president; many thought the result fraudulent.

Many students have been badly demoralised by the defeat of the 2009 movement. In its aftermath, many turned to drugs, mysticism and lifestyle or identity politics; others tried to gain positions within local government so that they wouldn’t remain so politically marginal and to have more influence on workers, dragging them to the right.

Left wing students have been critical of president Rouhani and rightly oppose his moderate faction, viewing it as little different to the hardliners. Both have the same agenda of implementing anti-worker policies.

The neoliberal program that began under hardliner president Akbar Hashemi Rafsanjani (1989-97) was expanded by the moderate Khatami government (1997-2005) and further entrenched under hardliner Mahmoud Ahmadinejad, who amended the constitution in 2006 to speed up the privatisation process. The neoliberal agenda has been implemented alongside austerity measures under Rouhani, whose government has privatised numerous state-owned enterprises.

So the major domestic rift between the hardliners and moderates concerns who will control the Iranian capital being privatised, and who will get the spoils of office.

But working class expectations had been raised when Rouhani came to power in 2013 promising to reinvigorate the economy and implement a civil rights charter. Although GDP has grown significantly in the past couple of years (6.4 percent in 2016), inequality has continued to grow dramatically, with more wealth transferred from workers into the hands of the ruling class.

Rouhani released a proposed budget a month ago, which called for slashing cash subsidies to the poor and raising fuel prices. The plan also included fees for things such as car registration and a departure tax. The president has been implementing austerity budgets since he came to office, in an effort to make Iran more attractive for investors. The austerity measures were implemented on top of years of recession, due to United Nations economic sanctions, squeezing even more wealth from the working class and the poor.

There are other contributing factors to the protests: a recent 40 percent jump in the price of staples, mass layoffs, unpaid wages for months across many workplaces in all industries, a labour movement resisting and struggling for several years against austerity and for independent unions, and the obscene wealth flaunted in front of the faces of the poor and the working class.

As with the Arab Spring of 2011, the situation was primed for an explosion; only a spark was needed. Now, the working class and the poor have unleashed the greatest radicalisation since the 1979 revolution.

Politics at the top

The factional struggles within the regime between the hardliners and the moderates, which created the cracks and fissures within the ruling class and paved the way for the Green Movement, are not the reasons for this uprising. Rouhani’s administration has tried to establish support within the ruling class, distributing handouts – to the liberal capitalists and to the security forces, to the hardliners and religious groups – to encourage members of the elite not to interfere with the government in different policy areas, from foreign politics to the economy.

For example, a large amount of spending in the most recent budget has been allocated to religious semi-public foundations, the Revolutionary Guards or the Office of the Leader, all of which are aligned to the hardliners. This is another factor that fuelled anger, especially among teachers.

Rouhani has also established a base within the liberal middle classes that led the 2009 movement and came out to protest in mass numbers against the hardliners back then; large sections of them turned against the moderates and the regime as the movement became more radical.

Not that the factional struggles within the regime have disappeared. The UN economic sanctions enforced on Iran during the Ahmadinejad era (2005-13) severely hurt capitalists of all hues. Khamenei and the hardliners came to view Ahmadinejad as a liability, so they sidelined him from the political establishment completely and barred him from running in any further elections.

For all these reasons, Rouhani’s government created a more stable situation. But the attacks eroded the government’s support among the working class and the poor, leading to significant developments in the class struggle.

Class struggle from below

In March, teachers went on strike and protested across the country, demanding a pay increase, and an improvement to the government’s education system. Teachers have waged a long-running campaign on this front over the past decade. On World Teachers Day, 5 October, thousands of teachers gathered in cities across Iran to demand fair salaries and the right to form independent associations. Teacher activists have been threatened, summonsed, arrested and tortured by security forces.

Persian Gulf International Transport Company workers walked off the job on 23 October to protest against the privatisation of the company and to demand unpaid salaries. The regime denies the basic right of workers to form independent trade unions; however, workers have been organising themselves in their workplaces and advancing their demands.

On 19 and 20 September, workers from two factories, Azarab and Hepco in the industrial city of Arak, took strike action and fought police. Azarab and Hepco are privatised factories manufacturing heavy equipment, including for road construction and the petrochemical industries. Workers at these factories have gone without pay for four to six months.

On 2 December, workers at the giant Haft Tapeh sugar cane plantation and mill complex in Shush, near the border with Iraq, launched a new round of strikes and demonstrations following from a strike in July, after more than four months without wages or entitlements. The Haft Tapeh workers have launched numerous strikes and protests over the past decade.

The Western political establishments and corporate media have made a great deal of slogans – such as “Not Gaza, not Lebanon, my soul is the redemption of Iran” or “Leave Syria and think about us” – being chanted by a minority in some of the protests, which are anyhow not the main slogans or chants in the uprising. As Michael Karadjis, a left wing political commentator and analyst correctly wrote:

“Many point to these slogans as evidence that the protestors are narrow nationalists only concerned about themselves and opposed to ‘helping’ other peoples in the region. While the misunderstood reference to Gaza does raise justified alarm bells … the demand to leave Syria is a manifestly internationalist slogan, similar to demands of the US antiwar movement for the US to leave Vietnam.

“After all, that movement did not begin as pure ‘internationalism’ – many wanted to end the state spending all that money destroying Vietnam and spend it at home to improve livelihoods. How many times have leftists in the West raised the slogan ‘Money for jobs not war’? What’s the difference?”

Outside of the campuses, there’s no organised force leading the uprising or intervening into it, unlike the 2009 movement that was led by the moderates who wanted to contain it to minor, liberal middle class demands. The workers knew that none of their grievances were being raised in that movement and hesitated to enter it as a mass force.

This time, the liberal middle classes are split, the upper middle class taking sides with the regime, worried that their own interests are being threatened. The moderates have been trying to derail the uprising and bring it under their own wing, but workers well understand that both the hardliners and the moderates are two faces of the same coin, wanting to further squeeze them, knowing that they are not organised. Both the moderates and hardliners have been using various tactics to have the protesters take up their chants and slogans, but they usually are beaten up, pushed out or booed and remain impotent in the face of the mass protests.

All indicators are that the uprising is continuing to expand and deepen. The teachers have called for a nationwide strike, which has the potential to be replicated in other industries given the militancy and class nature of the movement. Security forces are set to crack down even harder, but so far the people show no signs of retreating.

One response to “Understanding The Unrest In Iran”