When a visibly ailing Martin McGuinness submitted his resignation from the post of Deputy First Minister (DFM) in the Stormont Executive last week we were all told that this was entirely an act of protest at the pellet fire shenanigans of his colleague, DUP leader Arlene Foster.

But now it seems that this was not the full story at all. McGuinness is suffering,  we learn, from a rare wasting, genetic disorder which according to some medical websites can be fatal within one or two years of the symptoms appearing.

This new intelligence prompts a couple of questions: Did Martin McGuinness really quit because he is seriously ill, and not because of Arlene? Or put another way, was he was going to resign for health reasons anyway but some bright spark in SF suggested ‘why not squeeze some political advantage out of the tragedy by telling the media he is going because he really has had enough of the DUP woman?’

We know that McGuinness will never darken the Executive’s door again because already Sinn Fein underlings are openly speculating about who is going to take over as DFM if, or rather when, Humpty is put together again.

The names of Conor Murphy, Gerry Kelly and someone called Michelle O’Neill, apparently the Health Minister, are in the hat. And poor Marty is not even a week out of Stormont! Would they be doing that if there was a realistic chance of his recovery?

As a result of this speculation, some in the media are going so far as to wonder whether Gerry himself might be tempted, a line of thought so detached from all that we have learned and know about the GBO that it almost brings tears of frustration to the eyes.

So it looks as if, once more, we have all been played by Sinn Fein.

None of this would have been possible of course without a credulous media. Could they not see what the viewers immediately saw when McGuinness’ gaunt features and lifeless eyes appeared on their TV screens? A man at the edge of existence who had probably only one thought in his mind as he signed the resignation letter for the cameras, and that was: ‘When am I going to be able to get home to my bed?’. 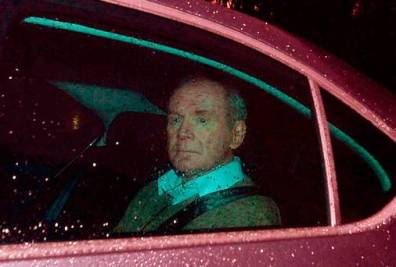 During their many years in the political wilderness, the Provos learned one valuable lesson about the media. This is that cowardice is the defining characteristic of my profession.

The Provos very quickly discovered that nothing brought the more stubborn reporters to heel more quickly or effectively than a combination of bullying and McCarthyite intimidation; of particular potency is the slur that journalist A opposes the peace process, or journalist B is a dissident fellow-traveler.

They never had to do this on a widespread basis, just with a select few, in the knowledge that the message would spread to all their colleagues. So most in the media learned that to avoid the same fate the prudent course was to go to SF press do’s, write down what was said and just repeat it on air or in their newspaper – nothing more and nothing less.

Over here, in the US, the American media is beginning to discover what it is like to have to cover someone whose press strategy is remarkably similar, although with one difference; Donald Trump is scatter gun and very public in his attacks on the media, whereas the Provos have always been much more discreet, even secretive, and selective.

That someone is, of course Donald Trump, whose press strategy was on display last week at Trump Tower at a press conference called in the wake of the breaking of the ‘Golden Showergate’ scandal.

The story was first reported the night before when CNN revealed that Trump had been briefed on the scandal by the heads of America’s major intelligence agencies.

He refused to take any questions from, and insulted the CNN reporter dispatched to cover the press conference. It was clearly an act of revenge for CNN’s ‘Showergate’ report and a warning to the rest of the media of what to expect if they behaved in similar vein.

Trump berates CNN reporter Jim Acosta, accusing him of being ‘fake news’ and refused to take a question from him. He instead turned to a reporter from Breitbart.

The rest of his colleagues, or at least most of them, sat quietly, waiting their turn to ask a question. Not a voice was raised in protest.

Since then there has been a lot of brave talk in the American media about the need for reporters to band together, to show a united front against Trump’s bullying.

I’ll believe it when I see it.