Is This Proof That The IRA Disappeared People Before Jean McConville….?

‘Harry’, the biography of IRA Forties man, Harry White, as told to Uinsean MacEoin, is one of those books about the republican movement’s armed wing more talked about than read.

There is a reason for that. The book, which was first published in 1985, is out of print and available copies are as rare as snow in August. There is a theory, undoubtedly aprocryphal, that so irate was the IRA leadership at the mass divulging of secrets by Harry White that they bought up and pulped all available copies.

Whatever the truth, ‘Harry’ is exceedingly difficult to get hold of. I’ve been searching for it for years with no success but in the last few weeks I found an American bookshop with one copy for sale. I can assure you it is a great read and gives a fascinating insight into the IRA’s 1939-1940 English bombing campaign and the state of the IRA in the 1940’s.

These were the men who, in their old age, protested against the left-wing direction taken by the Goulding IRA, effectively beginning the split of 1969 and then saw the new Provisional IRA they had been widwives to, develop into a fighting force, the strength and ferocity of which they could never have imagined in their own heyday.

This was also the IRA which saw members of the Adams’ family, pre-Gerry the MP and TD, on active service. Father, Gerry Snr. was, at age 16 1/2,  arrested in 1942 after he wounded a policeman in the foot and was himself wounded twice. He was then jailed for eight years and served five.

Uncle Dominic, as a new book on the IRA’s 1939 campaign alleges, played an important role in the 1939 bombing campaign in England and stands accused of being the mastermind behind the August 1939 bicycle bombing in Coventry which claimed five innocent, civilian lives. Another uncle, Paddy, was OC of IRA prisoners in Crumlin Road for a while.

Harry White also happens to be the uncle of Danny Morrison, for so long P O’Neill during the years of the Adams’ leadership. If you look at the first extract from ‘Harry’ reproduced below you will see a reference to a secret line of communication to IRA prisoners in Crumlin Road jail which was run from a general shop on the Falls Road owned by Danny’s mother Susan and his aunt Cathleen.

In exchange for extra wartime rations of candy, a prison warder was happy to ferry messages back and forth between IRA prisoners and their leaders. The authorities never discovered the line.

So many of the names recounted in ‘Harry’ are familiar from the later Provo campaign, compelling evidence that being in the IRA was often something handed down from father to son. Except what made the Provisional IRA so much deadlier than the Forties men was the fact that a whole new generation, unconnected to the IRA of the past, were persuaded to join up after August 1969.

One other episode in ‘Harry’ jumped out at me and it raises the question of when precisely did the IRA begin ‘disappearing’ informers or other miscreants whose deeds they would rather keep quiet. Was Jean McConville part of long, disreputable tradition?

Aside from documented instances of revenge and unauthorised disappearances of West Cork Protestants and Anglo-Irish luminaries carried out after the Truce by the IRA in that area, the conventional history of the period does not describe any other instances of ‘disappearances’ during the conflict with the British.

However in 2013 claims that the IRA of the Anglo-Irish war era disappeared up to 200 informers were made by Trinity history professor Eunan O’Halpin. In 2014, as this brokenelbow post recounts, the claim was repeated by Gerry Adams who suggested that the Provisional IRA was therefore no different, morally speaking, from the creators of the modern Irish state and in fact could be said to be superior in that regard since it has made efforts to recover the lost bodies whereas the IRA of Collins and de Valera did not.

O’Halpin’s and Adams’ assertions have, however, been – as I put it in that post – ‘comprehensively’ and ‘brutally’ dismissed by journalism academic and Sinn Fein activist, Niall Meehan. You can read his response to O’Halpin on that brokenelbow post.

So what is the truth? Harry White gives a detailed account of the court martial of a Belfast man accused of betraying arms dumps to the RUC. The man is found guilty – justifiably so according to White – and is sentenced to death.

The execution is planned. As White writes it: “He was supposed to be taken out then and shot and buried on the mountain.” The court martial had taken place in Swatragh in south Derry. Harry, who had eaten some tainted meat was ill and lying in bed in a nearby cottage, waiting to hear the fateful shot. But nothing.

Eventually the would-be executioners arrive back with an excuse. There had been a bad frost overnight and the ground was too hard to dig a grave, they said. It soon become clear to Harry however, that the executioners had lost their nerve and in the face of the condemned man’s protestations of innocence could not bring themselves to do the deed. A few days later however, after a flight from the RUC, the accused man’s body was found floating in a river.

There doesn’t seem much doubt that the group headed by Harry White intended to bury the accused informer in an anonymous grave on a mountainside somewhere in south Derry. If the intention was to later tell his family where to locate the remains, then he does not say so. In the absence of anything written to the contrary one can only assume that this was a ‘disappearance’ Jean McConville-style.

What is striking about Harry White’s account of this episode is its matter-of-fact tone. If this was the first time since the 1920’s that the IRA had ‘disappeared’ someone then there is nothing in his prose to suggest that, no comment, no surprise, no explanation.

It is therefore difficult not to conclude that ‘disappearing’ people and the IRA were not strangers to each other long before Jean McConville. 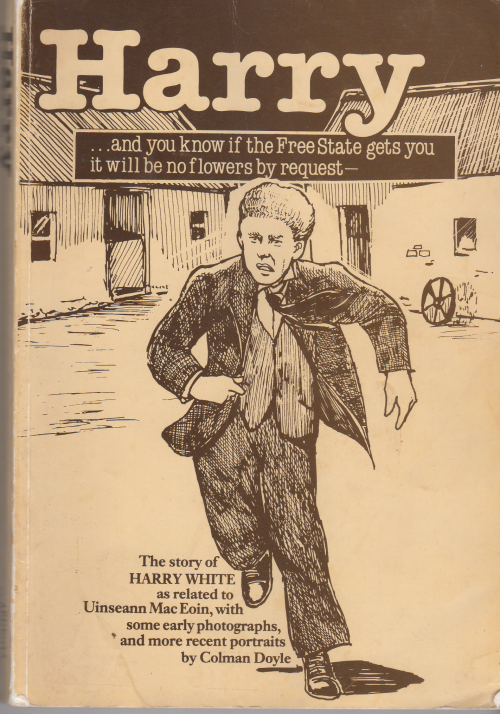 Harry White, pictured in the yard of the Co. Cavan farmhouse where in 1942 he escaped Free State special branch men

4 responses to “Is This Proof That The IRA Disappeared People Before Jean McConville….?”