Sinn Fein: The Times They Are A-Changing

Two pictures tell the tale. The first was taken in 1983 in the aftermath of that year’s British general election, the second on Friday in the wake of the Assembly election count in West Belfast. 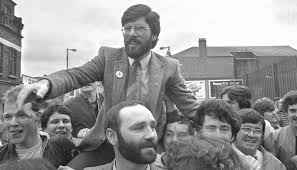 One thing has not changed. West Belfast is still the most deprived area of Northern Ireland, ranking number 2 for unemployment and number 1 for the poorest health.

Foyle, the other constituency which returned a PBP Assembly member in the shape of Eamonn McCann, ranks number 1 for unemployed adults and 3rd for poor health.

It is no accident that these two seats showed the same shift to the left that has been apparent elsewhere in the West, in Britain in the shape of Jeremy Corbyn and here in the States in the extraordinary electoral challenge to Hillary Clinton mounted by Bernie Sanders.

All these political phenomena have the same root cause: anger and disillusionment brought on by the excesses of neo-liberal economic policies.

We don’t know yet how the Corbyn and Sanders’ stories will end but it is very likely that politics in both places will never be the same again.

So what of the North? The two seats which moved leftwards in last week’s election were for over thirty years the engines that drove the Sinn Fein machine into power first at Stormont and then near to power in Dublin.

But just as the Corbyn and Sanders phenomena – and also Donald Trump – are symptoms of a rebellion against political party establishments which are out of touch with their own people, the setbacks for Sinn Fein are similarly rooted.

West Belfast in particular has had a Sinn Fein MP more or less uninterrupted since Gerry Adams won the seat in 1983. In Foyle, Sinn Fein and the SDLP share control of the area but it is Sinn Fein, through local man Martin McGuinness, which has access to the First Minister’s office at Stormont.

Sinn Fein control or influence has, as the grim unemployment and health statistic show, done little to better the lives of the people in these areas who have voted for them, one election after another. All the mainstream parties shed votes in the Assembly election but none more so than SF, whose vote fell by 2.9 per cent.

Bernadette McAliskey wrote recently of how there are now foodbanks in Dungannon, near her home, but there were none when she and her comrades began the struggle for civil rights in the late 1960’s. So how, Nationalist voters in particular are entitled to ask, has the Good Friday Agreement or Sinn Fein’s political adventure at Stormont made their lives better?

The setbacks suffered by Sinn Fein in both seats last week are more than a judgement on neo-liberalism or the cruelties of austerity. They are also a profound pronouncement on the failings of a party that has become complacent and out of touch, more focused on securing seats at cabinet tables on both sides of the Border, and with that their place in history, than creating jobs and better lives for their people.

For Sinn Fein, the message from last week’s election results is loud and clear – the times they are a-changing.

10 responses to “Sinn Fein: The Times They Are A-Changing”