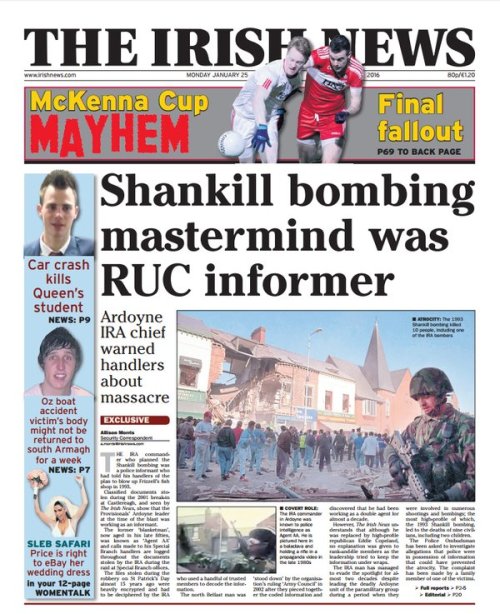 The alleged former IRA commander in Ardoyne who has been accused of being an RUC agent – known only as ‘AA’ – who told the authorities in advance of a plot to bomb the UDA headquarters on the Shankill Road in October 1993 has, through his solicitor, denied the claim and asked that ‘classified documents’ at the heart of the accusation against him be handed over.

The ‘classified documents’ are, apparently, in the hands of The Irish News which, in its January 25th issue, published a story claiming that the RUC Special Branch ignored ‘AA’s’ warning and allowed the bombing to go ahead.

The attack went badly wrong and the bomb detonated prematurely, killing one of the two IRA bombers, six civilian shoppers and two children in Frizzel’s fishmongers directly underneath the UDA’s offices.

In that edition, The Irish News claimed it had ‘seen documents’ to back up the story but it has so far failed to publish them or to detail their contents. Two days later, in its January 27th edition, the paper took this a stage further and claimed it ‘had seen’ classified documents which supported its story.

The brokenelbow.com believes that not only does ‘AA’ have the right to see the documents but the public has an even more pressing claim, given the widespread concern about the conduct of intelligence operations during the Troubles that the allegation has raised.

Not only that but ‘AA’s’ life has been put in danger by the story and he has been forced to flee his home, according to his statement.

The Irish News should publish these documents now, explain why it did not do so when it broke the story or explain why it cannot make them public. This story was not sourced, not even anonymously, and so the content of the documents take on added importance in terms of the credibility of the allegation.

It was not very re-assuring to read The Irish News’ account of ‘AA’s’ statement protesting his innocence and see that there was no mention of his demand that the ‘classified documents’ be made available to him. Why not?

In an article published under her by-line today, Allison Morris, the author of the first ‘AA’ article, dismissed the alleged agent’s denials and compared them to now discredited claims of innocence from the IRA agent Steaknife, Freddie Scappaticci.

The best way to prove ‘AA’ wrong is not to make comparisons with a man whose denials have been proved false, unlike ‘AA’s’, but to make the ‘classified documents’ public.

In the meantime here is that section of ‘AA’s’ statement, as issued by his solicitor:

These scurrilous allegations and reckless journalism have led to death threats being made against me since the publication of the article. I have had to leave my family home to protect my family from attack. This situation has been very stressful and upsetting to me and my family.

I would question the existence and/or authenticity of the ‘classified documents’ allegedly seen by the Irish News. I have, through my legal representative, requested sight of said document and if I am denied access to them by the Irish News I will have no option but to consider the legal remedies available to me.

I have requested that my identity is not published by my lawyer at this stage as I am concerned that this would increase the possibility of an attack on me and my family.