‘AA’ RUC Agent Story – Allison Morris Needs To Do Better Than This!

The Irish News’ reporter Allison Morris will have to do better than this if she wants to convince her readers that her story about the IRA agent known only as ‘AA’ is true. 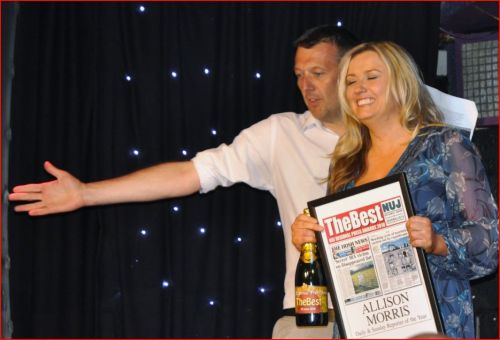 In recent days ‘AA’ released a statement through his lawyer, Padraig O Muirigh (Paddy Murray, for the benefit of my non-Irish speaking readers), denying that he was an agent for the RUC Special Branch who had tipped off his handlers about an IRA plot to bomb the UDA leadership in October 1993.

Allison Morris’ response, in the columns of today’s Irish News was to lampoon ‘AA’s’ statement, and compare it to the denials made by Freddie Scappaticci when he was accused in the media of being the agent ‘Steaknife’.

Claims that he was being targeted by “scurrilous allegations and reckless journalism” could have came straight from the mouth of the army agent Stakeknife, believed to be west Belfast man Freddie Scappaticci.

Well, my mother was not born on Mars but if The Irish News was to publish a story claiming that, thanks to her, I had Martian blood flowing through my veins and I responded by accusing the paper of ‘scurrilous allegations and reckless journalism’, would that put me in the same category as ‘Scap’, a discredited, lying former Special Branch spy?

Would that mean that my denial was worthless?

Here is the text of her story. Enjoy:

Denials by IRA man said to be ‘AA’ sound familiar

THE denials issued on Thursday by the man said to be agent ‘AA’ – an IRA commander at the time of the Shankill bomb – sound very familiar.

Claims that he was being targeted by “scurrilous allegations and reckless journalism” could have came straight from the mouth of the army agent Stakeknife, believed to be west Belfast man Freddie Scappaticci.

Back in 2003 Scappaticci, who is now to be subject to a police investigation into his alleged involvement in more than 20 murders, hit out at the media as he insisted his innocence.

“I had to leave my home for a couple of days for safety’s sake and lie low, my family has been tortured by the British media and gutter press,” he said.

Shortly afterwards he fled Northern Ireland and now lives under an assumed identity in England.

This week former Sinn Féin director of publicity Danny Morrison said suspicions about Scappaticci were known to republicans as far back as 1990, 13 years before he was outed by the media.

The allegations about AA were also known by republicans as far back as the end of 2002, again just over 13 years before they were finally revealed in the Irish News.

A team of police officers from outside Northern Ireland will now investigate the Stakeknife case.

The Police Ombudsman will probe allegations about AA.

The investigation will need to establish not just if the RUC had prior knowledge of an attack on the Shankill in 1993, but also why a man known to be the commander of the IRA throughout the 1990s has never been arrested or questioned in relation to the numerous attacks carried out by the organisation’s most active unit.

4 responses to “‘AA’ RUC Agent Story – Allison Morris Needs To Do Better Than This!”