Some of my readers will be aware of the ongoing dispute between my colleague Anthony McIntyre and Noel Doran, editor of The Irish News and one of his senior reporters, Allison Morris over, inter alia, that newspaper’s coverage of an interview Morris had with Dolours Price and the consequent subpoenas served on Boston College by the US government on behalf of the PSNI.

Recently I contacted Noel Doran by email offering him the right to reply to an article that had appeared on McIntyre’s Pensive Quill blog which I intended to reproduce as an act of solidarity over threats from lawyers to close down his site. I reproduce the exchange below and beneath that the original article at the heart of this argument. Suffice it to say Noel Doran never took up my offer (click on each email and article extract for a larger version). 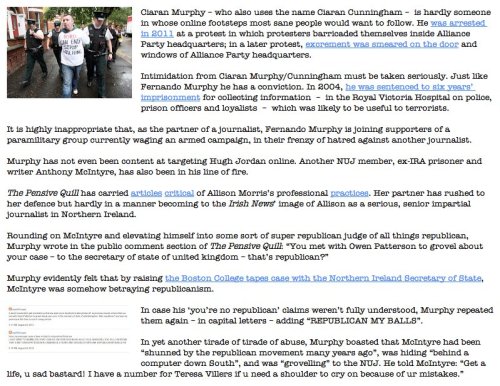 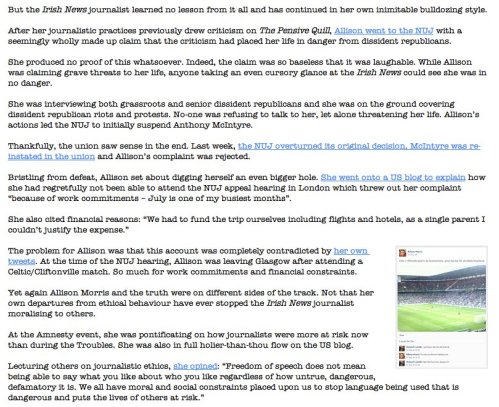 The following email was received from Noel Doran on October 3rd. It is in two parts for logistic reasons (click on it for larger version):

I will make a couple of comments. Firstly, readers can check my emails of 19th and 27th September for the presence of any profanities. I can see none and indeed I am not in the habit of using them in emails. That is not my style. Either there is something very wrong with the Irish News’ firewall or something very wrong with Noel Doran’s understanding of how such things work.

Secondly, I am glad that Noel Doran is no longer seeking to close down the Pensive Quill and that he now prefers the route of reply to legal action against those he has quarrels with. I have already offered Noel Doran the right to reply and of course that offers remains extant.

Noel – I am glad, at least, that you now implicitly accept that the email I sent you on September 27th contained no profanities at all and that there were none in my substantive message to you on the 19th. But why did you include these in your complaint when you knew it wasn’t so?

As for a writer using a nom de plume or as you prefer to call it “a pseudonym”, there is a long, distinguished and honorable record of this happening in literature, politics and newspapers, from JK Rowling to Stephen King, from the Bronte sisters to Benjamin Franklin; the Irish Times used Quidnunc, Hibernia used Tom Luby and the Federalist Papers were by-lined by Publius, all to hide the true identity of the authors. So nothing new or remarkable about it happening on a blog. It’s part of the history of human literature. You can read about the practice here and here.

A third e-mail from Noel Doran:

So, Noel, I guess that means you won’t be giving a response to the Pensive Quill article after all? That’s a pity. You call it “nonsense” and if so it should be easy for you to answer and demolish. Since you won’t do that you can hardly complain if some people people conclude you won’t respond because you can’t.

One final word on anonymity in journalism. Doesn’t the Irish News grant anonymity to sources for its stories all the time, not least Allison Morris in her various pieces on dissident republican groups? I understand and approve and have done it myself often but pray, what is the difference between that and a writer using a nom de plume to ensure his/her anonymity.

On that note this tedious exchange has ended.