Stormont Crisis: The Gravy Train Versus Something Really Different

I see that Theresa Villiers has appointed the three wise monkeys who will doubtless rubber stamp the doubtless already agreed formula which allows everyone to continue pretending that the Provos do not have an armed wing, or if they do that it operates independently of the SF leadership, so they can all get back on board the gravy train at Stormont. 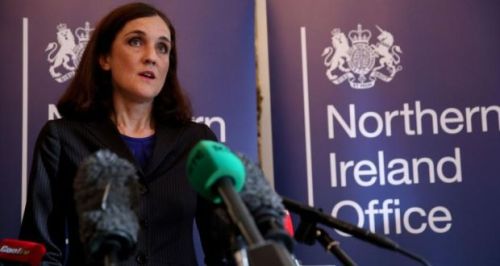 NI Secretary Theresa Villiers – why do I always think of Cruella D’Evil when I see her photo?

Why such cynicism? Because it is merited. The crisis was a sham one from the get-go. Every single party to the St Andrews deal knew full well that Sinn Fein would need to maintain an armed wing in case the dissident republicans got uppity. The Provos wanted a more formal recognition, i.e. retention of some guns sanctified by Blair and Ahern but what they got instead was a nod and wink go-ahead. It was enough.

Even, or perhaps one should say especially, the DUP was aware that IRA decommissioning was incomplete but made no fuss, instead demanding something SF was wont to do anyway, which was to accept the PSNI. With that delivered, and the guns issue hopefully sidelined, Ian Paisley careened happily, nay enthusiastically into government with Sinn Fein.

Only when ‘Jock’ Davison and then Kevin McGuigan were killed by the non-existent wing did the loose thread begin to unravel the ball of deception. And but for Catherine McCartney’s brave denunciation of the PSNI would the police top brass have ever come clean on IRA responsibility for the McGuigan slaying? An interesting question.

Would you buy a used lie from these people?

Here below is another take on the ‘crisis’ at Stormont, from former journalist and now US-based consultant, Michael McDowell who begins from the premise that the existing institutions have broken down, that another IMC-type body to monitor paramilitary activity just won’t wash, that a fresh start needs to be made and the Good Friday Agreement replaced. One doesn’t have to agree with all his arguments to know there is much truth in what he says.

But I rather think the gravy train will trundle down the tracks nonetheless. That gravy just tastes so gooooooood! And there’s so much of it!

It’s time for a new peace deal… with public support

If the Executive parties cannot reach agreement, the London and Dublin governments should seize the initiative and appeal to the electorate over the heads of the politicians, writes Michael H C McDowell in Washington, DC.

There is a possible solution to the political crisis at Stormont – but that solution requires imagination, energy and determination on the part of London, particularly, which pays the bills, and, secondarily, Dublin.

Northern Ireland’s constitutional problems are not unique, in spite of the truly bizarre pride which many of our politicians take in rejecting suggestions from outside which might make the 1998 Good Friday Agreement work as it was originally intended to.

“That wouldn’t work here … you can’t compare us with other places … we need an Irish solution to an Irish problem … we’re not like anywhere else … we’ve tried that before,” are the pathetic bleatings of these political critics. And yet many of them have the cheek to travel around the world offering advice to other conflicted jurisdictions, boasting that our “model” should be replicated abroad.

Sadly, the current model is not successful. It might have been an initial success in 1998 and for a short period afterwards, but the Northern Ireland model is not fit-for-purpose any more.

Above all, the public must have confidence in the Executive and Assembly; it no longer has that confidence to any meaningful extent, as polls consistently show.

Calls for another quick fix – by resurrecting the Independent Monitoring Commission (IMC) in a “tougher” form – suggests a shifting of deckchairs on our political Titanic, unless, this time around, it leads to root-and-branch dismantling of the billions of pounds and euro in money-laundering, fuel-smuggling, racketeering, drug-running and criminal assets – and, of course, eliminating the killings and maimings on both sides of the border.

The public must be convinced that any “new” IMC has no hidden agenda and can unequivocally answer key questions – for example: “Is the IRA army council still operating, in any way?” And: “Are there still weapons being held by the IRA?”

If the answers to either or both those questions is “Yes,” then Sinn Fein must lose its right to be in government with wholly democratic parties.

The man and woman in the street are already sceptical that this latest of so many rounds of talks will produce broad agreement among the DUP, Sinn Fein, Ulster Unionists, SDLP and Alliance.

Of course, it is worth having talks, but if they don’t work, what is the Plan B of the two governments? Well, there isn’t one.

A quick election is demanded by Sinn Fein, with their eyes on the southern election next year, but a Northern Ireland election would meet the definition of insanity – ie, repeating the same old exercise and expecting a different result. Instead, we would have the familiar political stalemate in the Executive and Assembly; indeed, it might be worse.

Direct rule from Westminster is favoured by others, but that takes away local decision-making and puts it in the hands of English ministers.

Joint-authority, with London and Dublin, puts a greener tinge on the body politic and infuriates unionists and, in any case, Dublin is just slowly emerging from a disastrous economic mess.

What would work instead? After 37 years in North America, seven of them in Canada, the rest in Boston, New York and Washington, I believe in taking calculated (I stress, calculated) risks and having that old American “can-do” attitude, thinking-out-of-the-box, and, yes, a “do-no-harm-either” approach.

Well, if the local parties cannot agree on a package which specifies an Executive formed by voluntary coalition, collective Cabinet responsibility on policies, forced resignations for misbehaviour or corruption, other reasonable accommodations, an official Opposition in the Assembly with powers to call and hold ministers to account, and mechanisms to achieve a political majority of elected representatives in both communities to pass community-sensitive legislation and other safeguards, then it is up to London and Dublin to pick up the ball which the feuding parties kicked out of the political pram.

Let the two governments put a take-it-or-leave-it package rejected by the warring politicians directly to the people of Northern Ireland in a referendum.

After all, it is more than 17 years since the Good Friday Agreement was supported by a majority in both communities in a high-turnout vote.

If the package is supported by the electorate, then London and Dublin can legitimately call a meaningful Northern Ireland Assembly election on the basis of that mandate from the people of the province expressed in the referendum. If it is rejected, then it’s back to direct rule or something less than joint authority. Or, if a referendum is seen as too high-risk, then have London impose the package, with support, ideally, from Dublin and Washington.

Admittedly, in 1998, the majority unionist and nationalist parties campaigned for a “Yes,” and it is possible the DUP and Sinn Fein could join in an unholy alliance for a “No.” That’s a call for the two governments to make.

A lesser risk would entail relatively minor reforms to strengthen the centre and weaken the two main sectarian parties, perhaps though a Northern Ireland-wide electoral “list” system of voting, as used in Scotland, which would enable the Ulster Unionists, SDLP and Alliance to get a stronger foothold in the institutions than the current STV system allows.

Surely, though, it is time for bolder actions? Now is the time to take risks for peace, in the spirit of 1998.

Again, an election now, or in a few weeks, will achieve nothing but further acrimony, and no doubt the turnout will reach an historic low.

The options I am suggesting will be resisted not only by the NI political parties (barring, possibly, Alliance and, at a long shot, the UUs and SDLP), but by the pusillanimous mandarins of the Northern Ireland Office, the mediocre Nervous Nellies of the Northern Ireland Civil Service and the sneaking-regarders of the Irish Department of Foreign Affairs. These naysayers must be ignored.

Yes, there is a precedent: my IMC idea was championed by Tony Blair’s chief of staff, Jonathan Powell. Number 10 overruled the NIO’s opposition to it and Bertie Ahern and the Taoiseach’s office chose to ignore the Department of Foreign Affairs’ doubts. The IMC came into being because of strong political leadership by Blair and Ahern. They were the ultimate “deciders”.

The people of Northern Ireland again and again have shown that they support power-sharing (including in the unionist community, please note) and such cross-community initiatives as integrated education and sharing of public facilities.

We have had much talk about “a shared future” but, many years on, no agreement on what that might mean. Can we seriously tackle sectarianism? Can we deal effectively with the horrors committed in the past?

And, lurking like a demon around the political corner, are the harsh penalties for not enacting welfare reform, which Sinn Fein reneged on months ago, with savage cuts in spending which would hurt the very poorest families in Northern Ireland. Like it or not, the Tories were elected with a majority and promised to cut welfare monies if elected.

Then there’s the supposed panacea of corporation tax – huge cuts in social services might be needed to replace the $300m alleged “savings” on that triumph-of-hope-over-experience idea. David Cameron and Enda Kenny have a major opportunity to break the political logjam in the north and give the vast majority of people who support true power-sharing the kind of joined-up government which they voted for in the 1998 referendum – not the DUP-Sinn Fein cynical carving-up of power.

The men, women and, above all, the next generation of citizens of Northern Ireland deserve better of their politicians.

Just producing a new “improved” (?) IMC is not enough, and our 108 overpaid, over-expensed, do-nothing MLAs need to be pushed off the gravy train of the public trough if they cannot do their job, lead and reach an accord. Let London and Dublin seize the initiative if the northern parties will not agree.

And, finally, please keep the United States out of it all, except for backing a final package, and ignore Capitol Hill’s undistinguished Amen Chorus for Sinn Fein. The ball must stay firmly in London’s and Dublin’s court, where it should be.

There is a possible solution.