Fair play to the Dublin-based media for keeping a wary eye on Sinn Fein’s rightward lurch as a general election in the South gets closer. It is encouraging to see the press at least doing its job – although none of what is happening will surprise this writer or the more devoted of his readers – and the latest to join the business of hard-nosed Shinner watching is The Irish Examiner’s political editor Daniel McConnell in this piece published today.

Here is the article for those unable to link to the Examiner‘s site:

News that Sinn Féin’s Pearse Doherty and other senior party members have been increasingly interacting with major businesses and employers may not be surprising, in light of their current poll ratings.

But, given its history and its previous anti-wealth policies, it is, on another level, truly remarkable how normal it is sounding these days.

By normal, I mean not radical.

For example, the cornerstone of its 2011 election manifesto was the introduction of a third 48% rate of tax on all incomes over €100,000 and a 1% wealth tax on high earners with assets over €1m, including family homes.

This was from the party who at the time made its TDs only take the average industrial wage and surrender the rest to the party coffers.

Such noble stances have since been dispensed with and pragmatism now reigns.

The party’s current tax policies are far more temperate, with the party now saying it wants to remove tax credits on a tapered basis on individual incomes above €100,000.

It does still want to introduce a 3% solidarity tax on individual incomes above €140,000 but has made clear it is only on the portion of the salary over €140,000 and not the whole lot.

It says it also wants to end the corporation tax break for the bailed-out banks.

But what Sinn Féin has been saying to big tech firms is really interesting.

Firstly, it is interesting that such firms see Sinn Féin as likely holders of ministerial office after the next election and wanted to see the whites of the eyes of those who they need to lobby.

Second, the response back from Doherty and co was fascinating.

“We have stated our commitment to a high-wage economy and sustainable tax base,” the party confirmed to me. 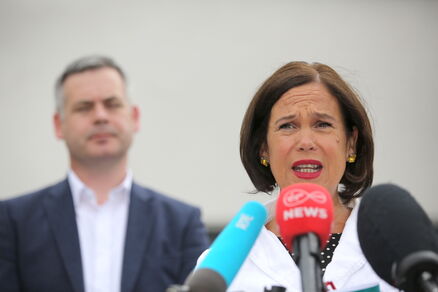 Sinn Féin is sounding and looking more and more like a party of the centre, one that will end up adhering to the status quo. Picture: Gareth Chaney/Collins Photos

“That includes increasing research and development through changes to the tax system, implementing the OECD international tax agreement and maintaining the current 12.5% rate, and protecting Ireland’s competitiveness by tackling long-run failures in housing and childcare,” it said.

This is some transformation and combined with its abandonment of its opposition to the Special Criminal Court, Sinn Féin is sounding and looking more and more like a party of the centre, one that will end up adhering to the status quo.

But Doherty and co will want their pound of flesh in some form to prove their change credentials.

They have chosen to focus in on the Special Assignee Relief Programme (Sarp), which was established in 2012 to entice entrepreneurs and social innovators into Ireland by providing additional tax relief on high incomes for up to five years.

Doherty and co detest it, or at least they say they do.

They have argued that the party does not support such a tax break that in one year gave 55 millionaires tax breaks worth more than €111,000 each.

Sarp was introduced by Fine Gael and has been highly controversial, as those on the left have argued that school teachers and nurses have ended up paying more tax than multi-millionaires.

Such tax breaks are much beloved of the big tech firms, which clearly do not want to see them abolished.

Brady said highly skilled and increasingly mobile workers are the key to competitiveness in an age where knowledge and intangible capital are driving global growth.

The truth is that this tax break is not just for a handful of people but hundreds who are able to offset large portions of their income.

According to the most recent data, 50 executives earning between €1m and €3m benefited from Sarp in 2019, with significant tax write-offs available on a large chunk of their income.

The scheme also allows write-offs of private schooling fees up to €5,000 and the cost of a return trip home once per year, if paid for by the person’s employer.

Should Sinn Féin’s poll ratings continue to remain where they are, such meetings with big business and big industry will not only reoccur, they will intensify.

One response to “‘Sinn Fein Moves To Centre’ – Another Media Spot As Election Nears…….”