Does The IRA Still Call The Shots In Sinn Fein, So To Speak?

It remains to be seen whether, inspired by the likes of Una Mullally and others, The Irish Times’ leader writers are persuaded that the party led by Mary Lou McDonald is now  IRA-free, that an ocean of clear blue water separates Sinn Fein from its military wing, and that the 26 Co. electorate, due to go to the polls on February 8th, should no longer harbour reservations about that matter.

See here for the latest development.

But if the editorial team of Ireland’s paper of record is squirming with indecision and angst, its collective pen hovering hesitatingly and nervously over the opinion page, it could do worse than re-read this October, 2015 piece in their own paper by Colm Keena, then The Irish Times‘ Public Affairs correspondent (see full text below).

Keena, who was writing amid another crisis of confidence in the Good Friday Agreement caused by IRA activity, reminded his readers of a famous 1977 IRA Staff report which fell into the hands of the Gardai Special Branch.

That document set out the detail and terms of the so-called Adams’ cellular re-organisation of the IRA and definitively described the relationship between the military  and political wings of the Movement. It has never, to my knowledge, been retracted.

(This difficulty facing Mary Lou comes while in Belfast a senior republican is recovering in hospital from gunshot wounds arising from an attack believed to be linked to the Jock Davison/Kevin McGuigan IRA killings of 2015, incidents which led to Colm Keena putting pen to paper in The Irish Times in the first place. The recent victim was spared death by virtue of the bullet proof jacket he was wearing when he was shot? Why, in 2020, is such protection necessary?)

The 1977 re-organisation heralded a revival of the military side of the IRA and a rebirth of Sinn Fein under the leadership of Adams, Ivor Bell and Martin McGuinness, which in hindsight can be seen to carry the seeds of Sinn Fein’s eventual entry into electoral politics.

It needed only the life fluids of ten dead hunger strikers to nourish the growth of that plant into the abundant flora we see now, a blossom that seemingly is on the verge of sharing a shelf in the Cabinet Chamber of Government Buildings, Merrion Street.

The key sentence in that 1977 document reads: ‘Sinn Féin should come under army organisers at all levels.’ That is about as clear and unambiguous as it is possible to be.

Ted Howell, flanked by Gerry Adams during the 1998 GFA negotiations in Belfast

The significance of the episode involving Ted Howell and Martin O Muilleoir over the CHI scandal is that it was fully and absolutely consistent with that sentence in the 1977 IRA document. I have known Ted Howell for many years and I can tell you he fits the bill. If you don’t believe me, go ask Noraid. Why would Sinn Fein south of Border order its affairs any differently? And what role does the IRA Director of Intelligence play in the Dail?

And when Mary Lou says that she and all SF candidates must now sign a pledge holding themselves ‘amenable’ to SF’s Ard-Chomhairle, as evidence that the IRA link has been broken, she begs the obvious question: ‘When and by whom was that statement of IRA supremacy over Sinn Fein – ‘at all levels’ – ever retracted?’.

IRA ‘oversight’ of Sinn Féin has roots in 1977 document 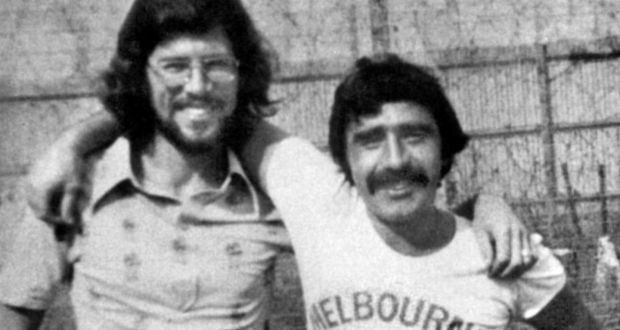 Gerry Adams in Long Kesh prison with Brendan Hughes. He would know whether the IRA oversees Sinn Fein

After last week’s report from the Secretary of State for Northern Ireland, Theresa Villiers, we know there is a body of congenitally conspiratorial men and women with access to guns who continue to think they control one of the most popular political movements on the island of Ireland.

However, it is typical of developments involving Sinn Féin and the IRA that the description of what is going on is ambiguous and inviting of speculation. Members of the IRA “believe” the organisation’s army council “oversees” both the IRA and Sinn Féin “with an overarching strategy”.

The report invites speculation that the men and women of the IRA might or might not be correct in their understanding as to what is going on. But if they don’t know, who does? Certainly not the electorate.

Gerry Adams is likely to have a good idea, but the extent to which anyone, inside or outside the republican movement, can comfortably rely for guidance from the man who says he was never in the IRA is itself a cause for concern.

He certainly has a clear understanding of the history of the relationship between the IRA and Sinn Féin and how it has evolved over the years. Back in the 1970s, he was part of a group that sought to overhaul the republican movement at a time when it was suffering from informers, declining morale and rejection by the communities on whose behalf it was supposedly fighting.

In late 1977, a document sketching out the new structure for the movement was found by the Garda in a flat occupied by IRA man Séamus Twomey. The malaise being experienced by the movement was to be addressed by a return to “secrecy and strict discipline”, it said.

“Army men must be in total control of all sections of the movement.” A new cell structure would help “gear ourselves towards a long-term armed struggle”.

Cells would be “specialised”, with “sniping cells, execution, bombing, robberies, etc” cells being put in place. “Sinn Féin should come under army organisers at all levels.” Sinn Féin’s work, the document said, “gains the respect of the people which in turn leads to increased support for the [IRA] cell”.

Adams became president of Sinn Féin in 1983 and has held the position ever since. During that period, the main plot line has been that of the IRA dog being transformed into the Sinn Féin tail, and for that we can all be grateful. A lot of dying and suffering first had to occur along the way, however, and the Villiers report last week indicates the strategy being pursued by the IRA in the 1970s still has its echoes.

That the public wearily reacts to such a situation as being one of the prices to be paid for peace and almost unworthy of comment is an example of the damage the Provisional movement continues to do to public life, north and south of the Border.

Recently in this newspaper, former Fianna Fáil minister of state Martin Mansergh wrote that notwithstanding the mixed causes, motivations and results of the conflict in Northern Ireland, and the responsibilities of others, most people view the post-1969 IRA campaign as having been a major mistake from which it may take a long time to recover.

There must be very few people outside the membership files of Sinn Féin who would argue with that assessment, but that won’t stop Sinn Féin from trying to muddy the waters.

In the wake of Sinn Féin’s successful performance in the 2014 local elections, Adams claimed the vote as support for the republican cause. Votes cast because of anger at social injustice, the bank bailout and other legitimate reasons were being claimed as support for a murderous cause that never received widespread support when it was under way.

It is better, of course, that people who in their early and middle adult years spent their time pursuing their political objectives by way of widespread misery and gore now spend their time delivering leaflets complaining about water charges and studying the latest Ipsos/MRBI opinion poll results in The Irish Times. That shouldn’t be allowed to take away from the dangers involved and the potential to further corrode the quality of public life north and south of the Border, however.

There was a type of lack of seriousness, and a willingness to pick and choose about rules, that lay behind the mismanagement of the economy during the boom years and the resultant economic crash. Voting for a political party with links to conspiratorial actors who occasionally indulge in murder is an odd response to a crisis with its roots in a failure of standards.

2 responses to “Does The IRA Still Call The Shots In Sinn Fein, So To Speak?”