Some five months after British paratroopers killed fourteen unarmed civilians in Derry in January 1972, on what became known as Bloody Sunday, a British cabinet meeting authorised the use of firearms against ‘lawful gatherings’ where ‘serious breaches of the peace’ were liable but had not yet happened.

On one reading the Cabinet decision gave the green light to British troops to use firearms against civilians virtually at will. Arguably that policy had already been deployed in the Bogside in January that year.

The Cabinet meeting, which was held on July 6th 1972, at the start of a ceasefire called by the Provisional IRA, heard both Prime Minister Ted Heath, and NI Secretary William Whitelaw argue that there were circumstances in which troops could be, and were, authorised to open fire on unarmed civilians who were not, at that point, doing anything unlawful, but whose activities were judged to have potential consequences that might provoke others to engage in severe violence.

In other words if a gathering or meeting might lead to violence but hadn’t yet done so, troops could use firearms if no other methods were likely to succeed.

The same Cabinet meeting also expressed the hope that the DUP leader, Ian Paisley could emerge to give political leadership to the fledgling Ulster Defence Association (UDA), which was growing strong enough to impose a form of  ‘mob rule’ in Northern Ireland that ‘would paradoxically resemble in many respects an extreme left-wing regime’.

The background to the discussion of both issues at the Cabinet meeting was a series of confrontations organised by the UDA in protest at the British government’s refusal to dismantle barricades in Nationalist no-go areas, especially in Derry.

The largest and potentially the most volatile of these was at Ainsworth Avenue between the Shankill and Springfield Roads which saw the UDA mass hundreds of masked, uniformed and cudgel carrying supporters in a threat to extend Loyalist no-go areas into the neighbouring Catholic streets.

The confrontation was defused when the British Army negotiated a deal with the UDA which saw British troops and UDA members mounting joint patrols in the area. The British concern was that the UDA confrontations could lead to violence against Catholic civilians which in turn could endanger the IRA ceasefire.

Here is the British record of that Cabinet meeting: 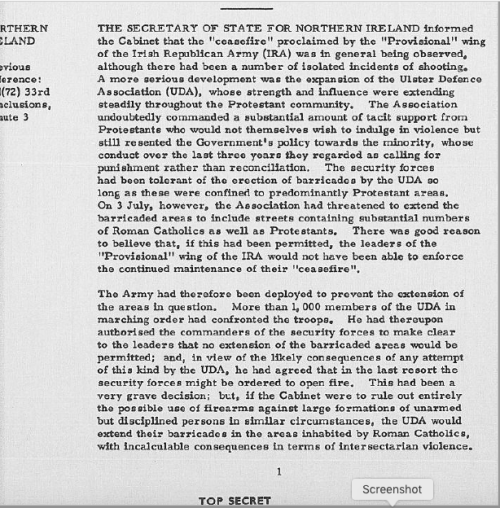 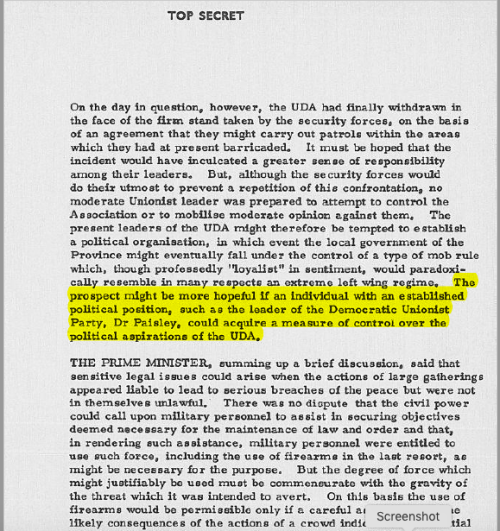 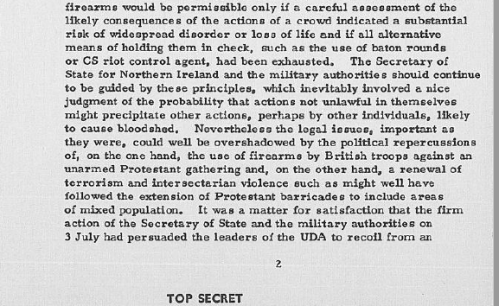 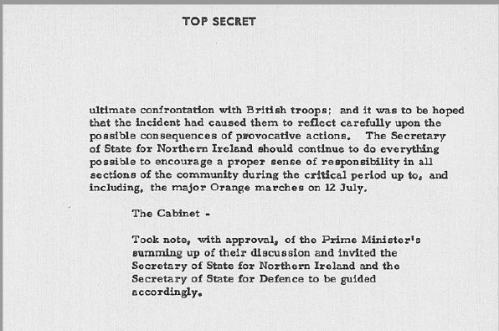