Having recently endured a somewhat similar experience with The New Yorker’s Patrick Keefe, over his account of the disappearance of Jean McConville, I have to say I feel deeply for ex-QUB academic, Stuart Aveyard over his complaint that his work was filched by the BBC for their headline-making series on the Troubles.

Aveyard researched diaries kept by Derry businessman Brendan Duddy who  played the role of intermediary between the IRA and the British during a mid-1970’s ceasefire, and discovered that Duddy had advised the IRA to intensify its economic bombing campaign so as to increase pressure on the British to deal with the IRA.

The discovery, which Aveyard wrote up in a book titled ‘No Solution’, casts doubt on Duddy’s carefully manicured image as an independent, unaligned man of peace who took no sides in the conflict, and it added significantly to what is known about this important phase in the Troubles.

But the revelations were presented on the BBC series to mark the 50th anniversary of the outbreak of the Troubles as the exclusive work of the ‘Spotlight’ team, headed by Jeremy Adams, when in fact Aveyard, who once worked at Queens University, Belfast had conducted the original research.

The BBC episode was headed up by Darragh MacIntyre who was assailed by Aveyard for plagiarism in a series of angry tweets on the internet.

While Aveyard’s accusations are hard to deflect, I have to say that I am also torn, because I like and admire Darragh MacIntyre. Nonetheless, when all is said and done, this was indisputably the theft of someone else’s work, it was wholly unwarranted but also I’d like to think, out of character.

Aveyard’s scholarship could have been properly credited, MacIntyre would have basked in reflective glory, and the BBC would still have had a scoop. Pressure from above, perhaps? Or worse still, bad judgement from above? Ormeau Avenue needs to explain and apologize to the academic. See tweets below: 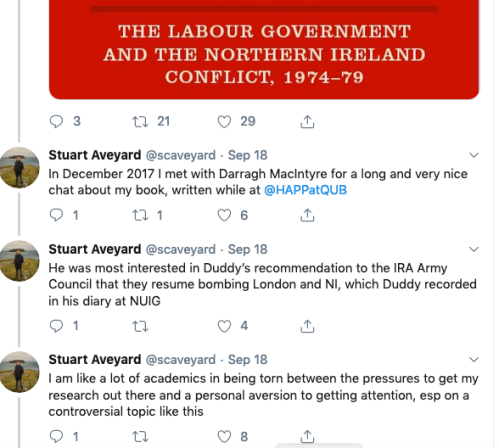