An unprecedented gagging order banning the media in Northern Ireland and Britain from reporting any aspect of the prosecution or trial of former Belfast republican leader, Ivor Bell on charges connected to the IRA disappearance of Jean McConville – including the trial date or any of the evidence presented in court – was imposed secretly by the Belfast courts last December, thebrokenelbow.com can reveal (see court documents below).

This disclosure comes as a ‘critical’ witness in the Bell prosecution has withdrawn from the proceedings because of a serious and apparently irreversible medical condition. 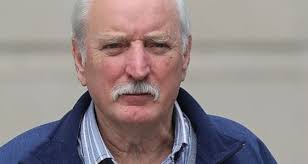 Lawyers for Dr Bob O’Neill, the librarian at Boston College and the custodian of the Boston oral history archive upon which the prosecution is based, applied to the US District Court in Boston recently to excuse O’Neill from giving evidence and this request was granted (see court documents below).

The precise reasons for Dr O’Neill’s withdrawal were outlined in a memorandum presented to the presiding judge, William G Young, but the contents were not publicly disclosed to interested parties.

Dr O’Neill’s evidence was considered vital for the prosecution because Boston College had lost Bell’s alleged contract with the college, the only piece of paper which identified participants in the project by name. The prosecuting authorities claim that the interviews by a participant known only as ‘Z’ were given by Bell while Bell and his defence team deny this.

Jean McConville – Disappeared by IRA in 1972, now the evidence in her case will be hidden

Dr O’Neill was likely to have given evidence about the chain of custody of Z’s interviews which the prosecution hoped would strengthen their claim that ‘Z’ was Bell.

At a secret court hearing in April this year, which mentioned Dr O’Neill’s illness, the presiding judge, Mr Justice O’Hara, remarked: ‘…Mr O’Neill is not a secondary witness in the proceedings, but critical to the issues before the court’.

The Bell ‘trial of the facts’ was supposed to have started on April 29th, but this was called off when the prosecution were notified by the US authorities of Dr O’Neill’s health problems.

Bob O’Neill – former librarian at Boston College, will not give evidence at Bell trial

It is understood that Dr O’Neill’s medical difficulty is one that develops and gets progressively worse over time. Usually the symptoms take months if not years to worsen to the point where the victim becomes incapable of coherent intellectual activity.

In a document endorsed by the US court, Judge William J Young noted that O’Neill’s condition ‘…appears to have begun in the past year’.

The obvious question arises: how long ago did the prosecution know that Dr O’Neill had a potentially serious condition that could inhibit his ability to give rational evidence? Was this before or after last December’s court order?

Under the terms of the order, the media has been banned from mentioning any aspect of the Bell prosecution ‘until the completion of the proceedings or further order of the court’. It is not clear whether this means that the gagging order can be extended after the trial has ended.

The gagging order applies only within the UK jurisdiction and since thebrokenelbow.com is published in the United States, this site is free to make the order’s existence known. Thebrokenelbow.com believes an important principle is at stake in this story: that is the public’s right to know and the media’s right to publish.

The order was imposed by Mr Justice Adrian Colton on December 19th last year at the conclusion of a hearing of the Ivor Bell prosecution in the Belfast Crown Court.

This decided that the former IRA Chief of Staff, who is 82-years-old, was mentally unfit to take part in a normal criminal prosecution. Instead Judge Colton ordered that he face a so-called ‘trial of the facts’, in which a jury will be asked to decide whether the facts of the case suggest guilt or innocence. He cannot face a prison sentence if found guilty.

While some legal sources suggest that Mr Justice Colton, a former SDLP activist and election candidate from Mid-Ulster who was once regarded as one of the party’s so-called ‘Young Turks’, may have acted to mitigate the embarrassment all this caused to Ivor Bell, the media was nonetheless permitted to publish his decision that Bell would face a ‘trial of facts’ because of his mental deterioration. Any embarrassment caused to Bell came with that publicised decision.

Here are the relevant documents, beginning with the court order:

Here is a copy of an article written and distributed to the media by one of the Belfast court reporters who normally files for most of the local media. It is dated April 29th this year, the date on which Bell’s trial of the facts was supposed to commence. It makes reference to Dr O’Neill’s health difficulties but warns the media not to publish the article: 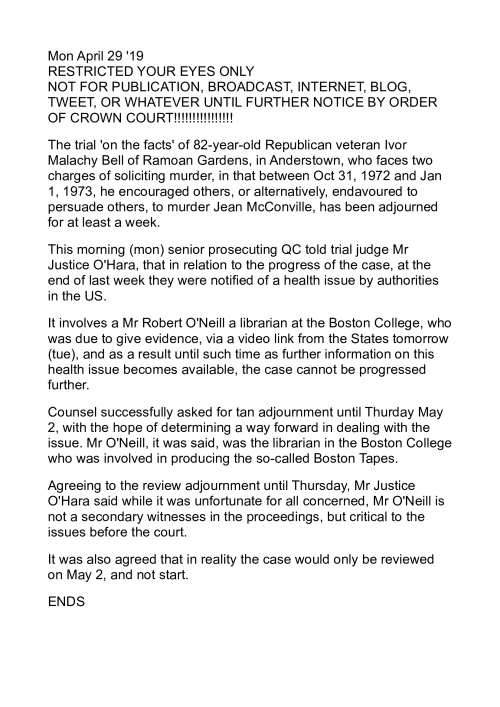 Here are the US District Court documents distributed recently to attorneys of record in the case. These include an unsigned order from the judge excusing Dr O’Neill from giving evidence: 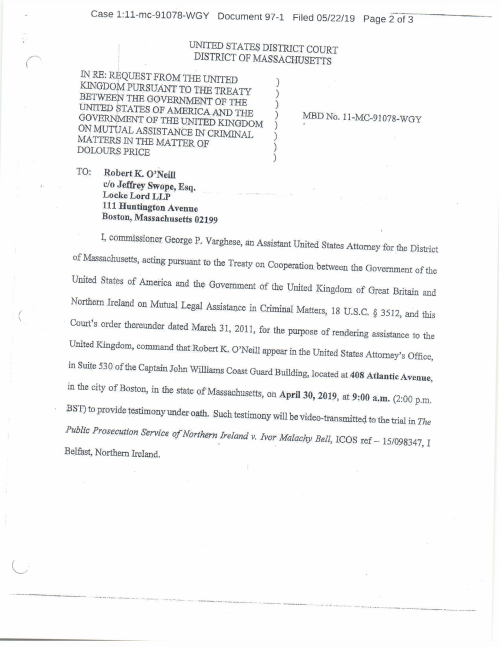 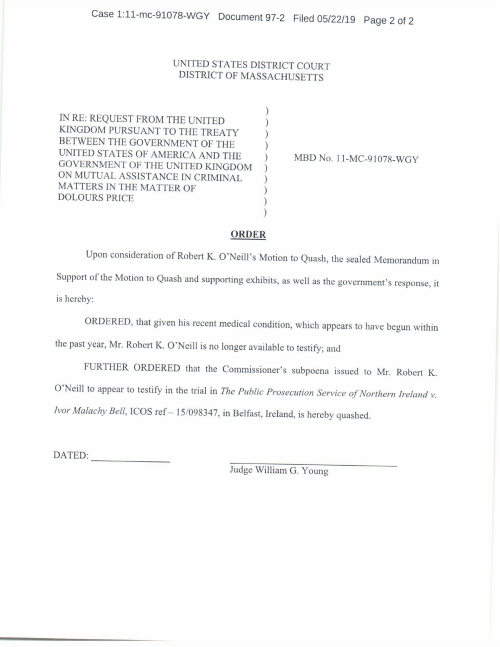 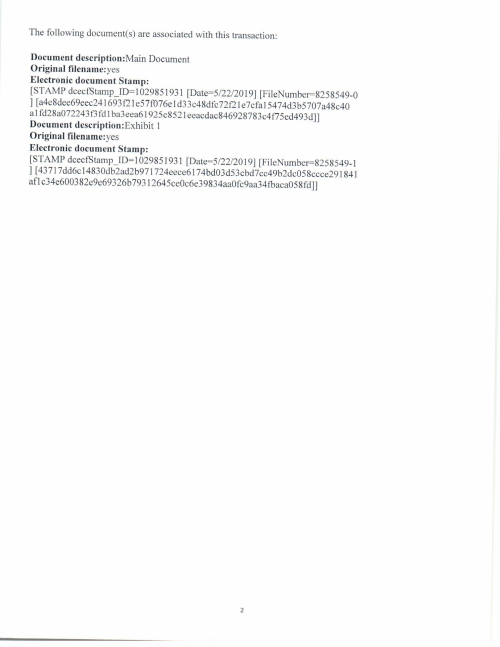 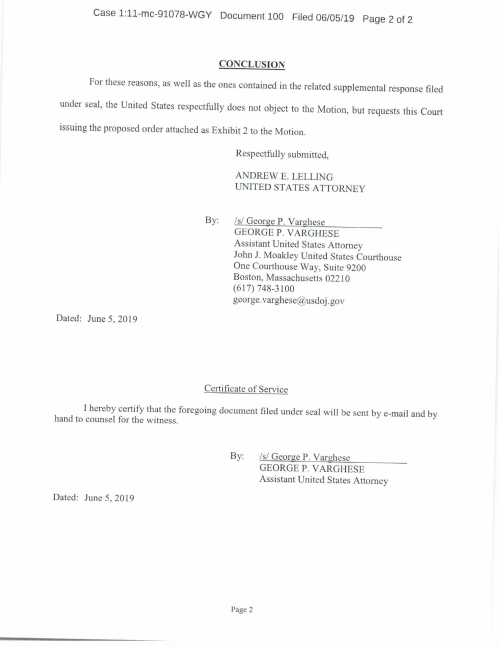