Did MI5 Or The IRA Kill The Enniskillen Dead? The Evidence May Be In A Letter We Cannot See

Sometimes, I just despair of The Irish Times.

There are times when it is not just essential to publish all the evidence behind a story but actually obligatory. And not to do so is a journalistic sin beyond comprehension.

In to-day’s (internet) edition of the Times, there appears a story which qualifies sans pareil for the above injunction.

The story deals with a letter purportedly written in mid-November 1987 by an MI5 officer working in Northern Ireland and addressed to Brian Lenihan, the then Foreign Affairs minister in Dublin

The letter claims that British intelligence knew in advance about the IRA’s plan to bomb the Enniskillen cenotaph in November 1987 but did nothing to stop it because it would create ‘a massive backlash’ against the IRA.

Civilians flee the scene of the Enniskillen cenotaph bombing

In fact, a careful reading of the story about the letter suggests much more: that not only did MI5 do nothing to stop the bombing but, according to the letter’s anonymous author, the spy agency actually manipulated the bomb’s timing mechanism so that it would cause the maximum damage to the IRA, i.e. kill the most civilians.

In other words, MI5 may have actually murdered the twelve civilians, not the IRA – although the IRA made it all possible.

The Times quotes the alleged agent as writing:

“Our section (of MI5) decided to change the timing device and let the explosion take place so that the IRA would score an own goal and create a massive backlash against itself,” he wrote.

“Our section also calculated that in the climate of a backlash against the IRA all kinds of security measures could be implemented including extradition.”

“If I had more courage I would come out openly and prove with more what I am now saying,” he wrote.

The Enniskillen bomb killed twelve people and dozens more were injured, some horribly, when they were engulfed in rubble. The backlash against the IRA was indeed considerable and arguably intensified a debate about strategy between the military and political wings of the Provos which ultimately took shape in the first IRA ceasefire of the peace process six years later.

The author of the letter describes him or herself as someone who had been working for  MI5 in the North for eighteen months or so in a section of the intelligence agency which specialised in infiltrating paramilitary groups.

He was so scared of being discovered, he wrote, that he crossed the Border to post the letter, which has now been released as part the 1988 tranche of government papers eligible for publication.

There is no way of knowing whether this story is true or someone’s sick fantasy, or if the author of the letter was a real MI5 agent or the product of someone’s overactive imagination.

But it is surely not without significance that the Department of Foreign Affairs considered the letter important enough to preserve in the files and now to make public in the annual festival of governmental openness.

The Irish Times‘ readership, especially those who follow the newspaper on the internet, might be helped in their efforts to discern the truth, if they could actually see and read the letter, as The Irish Times‘ journalist who wrote the story evidently did.

In this day and age of iPhone and iPads capable of taking photos anywhere, and the ease with which the products can then be displayed on the internet, surely the paper’s readers should have been allowed that basic right?

Here is the Times‘ story in full: 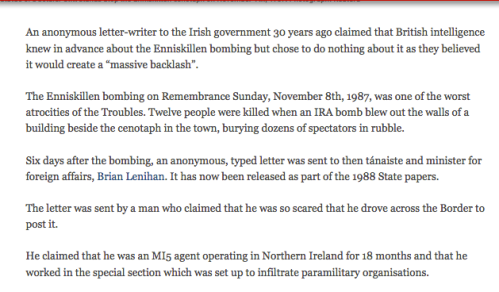 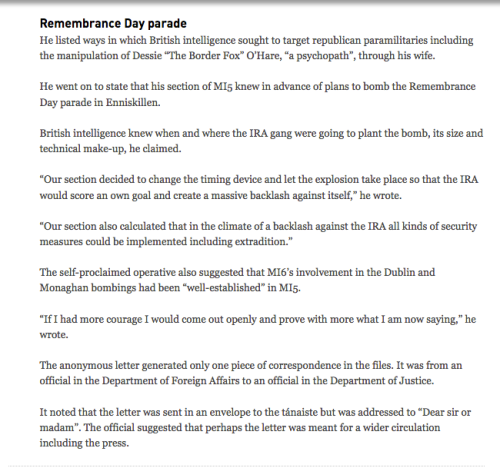 7 responses to “Did MI5 Or The IRA Kill The Enniskillen Dead? The Evidence May Be In A Letter We Cannot See”