It is being reported tonight (Thursday, NY time) that Sean Garland, the former Official IRA and Workers Party leader, has died. With his death and that of Des ‘the Devil’ O’Hagan three-and-a-half years ago, a chapter in the extraordinary history of left-wing Irish republicanism has come to a close.

Sean Garland in his later years

Garland and O’Hagan were the major architects of a hugely successful con trick played on the Irish people which lasted from the late 1970’s to the Spring of 1992. Complicit in the con, indeed vital to its success, was a significant section of the Irish media.

The con trick was to persuade a significant section of the population that the military group that they led, the Official IRA, no longer existed, that it had wound up in the mid to late 1970’s, after the last of the feuds with the INLA and the Provisional IRA, and that via the Workers Party, those who had been active in that organisation were now completely committed to peaceful political methods.

It was, of course, a lie. The Official IRA continued to exist, not least to protect Workers’ Party activists north of the Border against the Provos and the INLA, but also as a fund-raising organisation for the political wing, especially south of the Border where the WP enjoyed remarkable electoral success until the party split in the early 1990’s.

The con trick was successful largely because the Official IRA’s continuing paramilitary activity was concentrated north of the Border, out of sight of southern voters and – significantly – many of the young, professional types in the South who were attracted by the WP’s class-based politics.

Under Garland and O’Hagan, the Official IRA was partitioned. It existed in the North but south of the Border its existence was continually and often angrily denied.

The Irish media played a significant role in peddling the lie. The media – RTE and The Irish Times in particular – were targets for successful penetration and journalists who did try to write the truth about the Officials, notably Vincent Browne and myself, were excoriated.

The hostility was not confined to angry words. I learned from a senior UDA source that two well-known members of the WP had told them that I was an intelligence officer for the INLA. Suspicious about this tale’s bona fides, the UDA checked it out and discovered it was nonsense. Nonetheless it was a serious attempt to kill me. 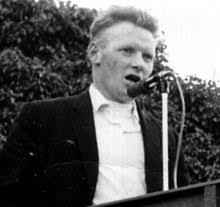 The power of the Officials in The Irish Times in particular, could not be exaggerated. When I was Northern Editor at the time that the Workers Party made a deal to keep Fianna Fail Taoiseach Charlie Haughey in power, I wrote a two-part Northern Notebook on the WP-Official IRA.

One part dealt with the Officials’ political journey, North and South, and that duly appeared on the Saturday morning. The second part, which dealt with the continued existence of the armed wing, disappeared into the ether. I was neither informed beforehand that it had been spiked, nor why.

Eventually, some years after myself and the Times parted company, I had the chance to put the record straight. A good friend and legal worker put me in touch with an RUC document which detailed the discovery of an arms dump in Turf Lodge which had been discovered by police as a result of a tip off. The RUC document was unequivocal. The arms dump belonged to the Official IRA.

So there it was in black and white. The lie that the Official IRA no longer existed, was just that – a lie.

At around this time Shane Harrison of the BBC Spotlight programme approached me about research he was doing on a possible special on the Workers Party. He was particularly interested in any evidence that the armed wing still existed.

So, I let him have a copy of the RUC document and that was enough to persuade his bosses in the Beeb to make the documentary.

The film was duly televised and with the BBC’s imprimatur stamped all over it, the allegation had to be taken seriously. As it was, a Gorbachev-style wing had sprouted up in the WP and the Spotlight programme was just the ammunition they needed to force a break with the Garland-O’Hagan faction.

The WP split at a special ard-fheis in 1992 and the Democratic Left was formed as a breakaway party, joined government in 1994 along with Fine Gael and Labour, and eventually were absorbed into the Irish Labour Party. The WP quickly and finally disappeared into the sinkhole of history.

As for Garland he soon had more serious matters to worry about. The US applied for his extradition on charges that he had assisted the North Koreans, with whom the WP had friendly relations, to distribute counterfeit, so-called ‘super dollars’. Somehow he managed to dodge that bullet.

So that was my little part in the downfall of Sean Garland’s ambitions. I never did get an explanation from The Irish Times for the censoring of my article on the Official IRA. But what the heck! The story had a happy ending, and that is all that matters.