Canadian blogger Ian Welsh can always be counted on to spot an angle on a story that has passed by nearly everyone else. Here he has spotted a clause in Teresa May’s Brexit deal which will, if approved by the British parliament, copper-fasten neo-liberal economics in the UK and make any attempt by a Corbyn government to roll it back nigh impossible, without a greater break with the European powers:

So, May has a Brexit deal. It’s a terrible deal, which makes the UK subject to many EU laws, and which doesn’t allow Britain to withdraw from the deal if the EU doesn’t want it to.

This has caused ministerial resignations, and Corbyn has come out against it.

But the interesting part is what the EU and May have negotiated. This clause, for example: 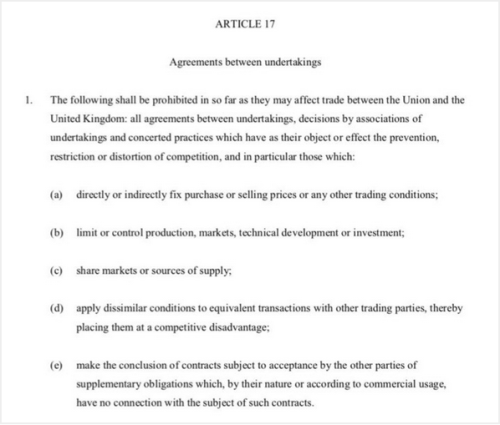 Corbyn’s policies include straight up re-nationalization of the railways, regulation of housing prices and the government outright building vast numbers of flats, among many other similar policies.

In other words, Corbyn’s policies interfere with liberal market rules. They are, actually, forbidden by the EU, but on occasion exceptions are made.

Now, retaining privileged access to the EU market was going to require some rule taking, but May has chosen to take more rules that are “no socialism” and less rules that are “treat your people decently.”

What May has done is negotiate a deal which ties Corbyn’s hands: he can’t do his policies if he becomes Prime Minister, and he can’t leave the deal. (Well, in theory, and perhaps in practice.)

Of course, Britain can still leave the deal: parliament is supreme, and one parliament cannot tie the hands of another parliament. Nonetheless, doing so would be damaging to Britain’s relationship with the EU, to put it mildly.

These sorts of efforts to tie future government’s hands, so that they can’t not do neoliberal policies are common. The now-dead Canadian Chinese trade deal had a clause which required a 20 year withdrawal notice, for example. The Canadian-EU free trade deal forbids the Canadian government from many of these sorts of policies as well.

This is the great problem with the neoliberal world order: it is set up to force countries into a specific sort of economy, and to punish them if they resist or refuse. That would be somewhat ok, but only somewhat, if neoliberal economics worked, but they don’t.

What they do, instead, is impoverish large minorities, even pluralities, in countries which adopt them. Those pluralities then become demagogue bait (hello Trump.)

Meanwhile Macron has proposed an EU military, and Germany’s Merkel has said she supports the idea.

EU elites are absolutely convinced their way is best, and that anyone who is against it is wrong. They are not primarily concerned with democracy (the EU is run primarily by un-elected bureaucrats), and do not consider democratic legitimacy as primary. If people vote for the “wrong” thing, EU elites feel they have the right to over-ride that. They have overseen what amount to coups in both Greece and Italy in the past 10 years.

The funny thing is that orthodox neoliberal economic theory admits there will be losers to neoliberal policies and states that they must be compensated. The problem is that has never been done, and indeed, with accelerating austerity, the opposite has been done: at the same time as a plurality is impoverished, the social supports have been kicked out from under them.

Macron has been particularly pointed in this: gutting labor rights in the name of labor market flexibility.

Neoliberalism, in other words, creates the conditions of its own failure. It is failing around the world: in America (Trump does not believe in the mulilateral neoliberal order), in Europe, and so on.

Even in countries that “support” the EU, there are substantial minorities, pushing into plurality status, which don’t support it.

So Europe needs an army. Because Eurocrats know best, and since neoliberalism isn’t working for enough people that things like Brexit happen; that Italy is ignoring rules, that the East is boiling over with right wing xenophobia, well, force is going to be needed. A European military, with French nukes, is the core of a great power military. And soon countries won’t be able to leave.

That, at any rate, is where things are headed. We’ll see if the EU cracks up first.

In the meantime, May’s Brexit deal really is worse than no deal, and in should in no way be passed. In fact, if I were Corbyn, and it was passed, if I became PM I’d get rid of it. Because it either goes or he breaks substantially all of his most important electoral promises.

The EU is loathsome. I won’t say it’s done no good, but it’s now doing more harm than good (indeed it has been for at least a decade.) As with the US, since it is misusing its power, it needs to lose it. That process will be ugly, since a lot of those who are rising to challenge it are right wing assholes (because the left has abandoned sovereignty).

But you can’t fail pluralities of your population and stay stable without being a police state and holding yourself together with brutal force.

Those are the EU’s two most likely futures: brutal police state, or crackup.

Pity, but that’s what EUcrats, with their insistence on neoliberal rules and hatred of democracy have made damn near inevitable.