The MRF File – Part Seven: Kitson Had Armed Guard & Personal Weapon For More Than A Year After Leaving Belfast

At the end of April, 1972, Brigadier Frank Kitson, the then head of the British Army’s 39 Brigade in Belfast, and the perceived founder of the Mobile Reaction Force (MRF) – the first undercover military unit of the Troubles – left Northern Ireland to become the head of the School of Infantry, a prestigious appointment which set him on the path to further promotion and social advancement. He would later be knighted and given a prestigious position at the court of the House of Windsor.

Within days of his departure from Northern Ireland, Kitson’s MRF fired its first shots in anger. By the end of June 1972 the MRF had killed one man and wounded nearly a dozen others. All were civilians with no links to Republican paramilitaries.

But Frank Kitson was not there to see this happen for himself. He was by this point ensconced in living quarters in Wiltshire, near Salisbury Plain, arguably the emotional heart of the British Army where vast military training exercises were a regular occurence.

Ensconced, but not so safely ensconced, it seems. For the next fifteen months an armed guard stood outside his house and the Brigadier was provided with his own personal protection weapon. Fear of an IRA attack is not mentioned in the correspondence below but it would have been surprising if this was not the reason for these precautions.

It was not until July 1973, well over a year since he had served in Belfast, that these arrangements were discontinued on the advice of the London Special Branch. But then in December 1973, Frank Kitson received a threatening letter and the Special Branch in Wiltshire recommended the resumption of security measures; the armed guard and personal weapon re-entered his life.

But only briefly. The Wiltshire Special Branch were advised by their colleagues in London that there was nothing to worry about and the security arrangements were withdrawn almost as soon as they had been put in place.

Nonetheless all this was evidence that, thanks to his writings on counter insurgency and his controversial service in Kenya, Malaya and Northern Ireland, Kitson had become the bete noire not just of Irish republicans but the British left as well, and this at a time when the myth of military intervention in political life in the UK was at its strongest.

Anyway, here is the correspondence: 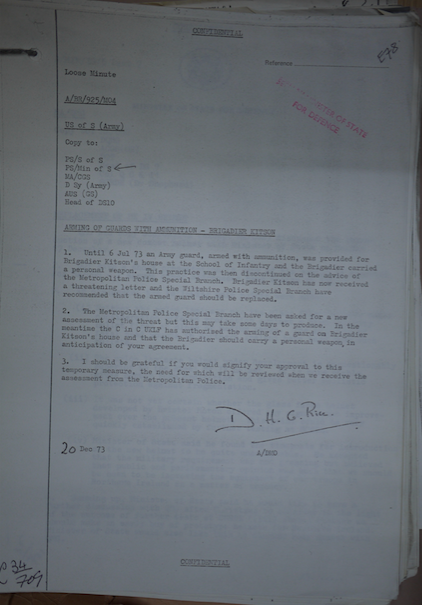 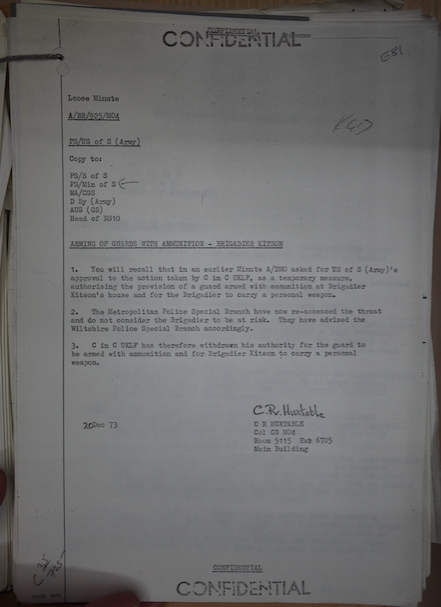 5 responses to “The MRF File – Part Seven: Kitson Had Armed Guard & Personal Weapon For More Than A Year After Leaving Belfast”