Joe Crowley’s Defeat Is A Big Blow To Sinn Fein 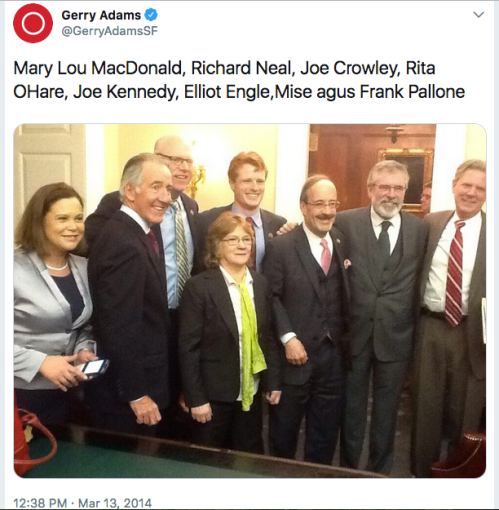 The chummy photograph above, taken from Gerry Adams’ Twitter feed in March 2014, shows the then leader of Sinn Fein enjoying the company of the cream of the Democratic Party’s congressional leadership as they prepare for the St Patrick’s Day celebrations in Washington.

The third figure from the left, wearing glasses and towering above Rita O’Hare, is a character called Joe Crowley. Until yesterday the Irish-American congressman for a district of New York that combines part of the Bronx and Queens had never been seriously challenged in his 20-year career in Washington.

Considered one of the most powerful Democratic Party bosses Crowley was being touted as the next Speaker of the House of Representatives if, in the November elections, the Democrats took control of the House and the current party leader, Nancy Pelosi was to retire, as some expect her to do.

Had all that panned out as it was supposed to then Sinn Fein would have had one of the most powerful politicians in the United States as a faithful friend and ally, someone who stood by Gerry Adams when he was arrested over the ‘disappearance’ of Jean McConville and unequivocally backed the party’s approach to the Good Friday Agreement through thick and thin.

That was until yesterday when a 28-year old, left-wing political neophyte called Alexandria Ocasio-Cortez thrashed Crowley in a primary election, upsetting the Democrat’s political apple cart and winning support for a radical program that included socialised medicine and opposition to Trump’s immigration policies.

With the fall of Joe Crowley, Sinn Fein have lost a powerful friend in the corridors of American political power. It was a bad day for the Democratic party’s cautious, centrist leadership; but it was also a bad day for the Shinners.