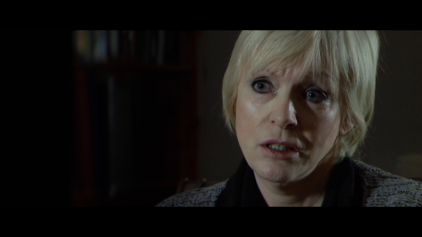 This piece can be accessed on The New Yorker website here, otherwise readers without access can scroll below to read it:

In December, 1972, a woman named Jean McConville was taken from her home in Belfast, Northern Ireland, by a gang of masked intruders, and never seen again. McConville was a widow, and a mother of ten; her children were home when she was abducted, and they screamed and clung to her legs. Her disappearance became known as one of the most notorious atrocities of the Troubles, the bloody, three-decade conflict that ravaged Northern Ireland. It was also, on a more basic level, a murder mystery. The McConville children were distributed to orphanages, and, growing up, they never knew what had happened to their mother. But it was long rumored that she had been killed by the Irish Republican Army, and, in 1999, the I.R.A. acknowledged that this was true. In a new documentary film, “I, Dolours,” which will be shown for the first time this weekend, at the Hot Docs festival in Toronto, a former I.R.A. member, Dolours Price, describes in unprecedented detail the operation to kidnap, murder, and secretly bury Jean McConville.

Price grew up in Belfast, in a staunchly Irish Republican family. As a young woman at the outset of the Troubles, she joined a secretive I.R.A. unit, the Unknowns, and performed dangerous operations, including an audacious bombing of the Old Bailey in London, in 1973. But after the Good Friday Agreement, which ostensibly brought an end to the Troubles in 1998, Price grew deeply disillusioned. She broke the I.R.A.’s code of silence and acknowledged, in press interviews, that she had played a role in McConville’s abduction: she said that she had driven McConville from Belfast across the border to Dundalk, in the Republic of Ireland, where another I.R.A. team executed her. Price also asserted that Gerry Adams, the Irish Republican politician who had helped engineer the peace agreement, was the person who gave her orders. Adams, who still maintains that he was never in the I.R.A., has strenuously denied this. (I wrote an article about this controversy in 2015, and am working on a book about the murder and its aftermath, “Say Nothing,” which will be published next year.)

In 2010, Dolours Price agreed to speak at length about her I.R.A. career with the Bronx-based journalist Ed Moloney—on the condition that he not release the interview until after her death. They met in Dublin, where Price was living, and Moloney conducted a long videotaped interview. Price was not well at the time: she had struggled with alcohol and prescription pills, and been diagnosed with P.T.S.D.; she was being treated at a local psychiatric hospital. But in the interview she is composed, sober, and coherent. Price died in 2013, from a fatal overdose of prescription pills. As its title would suggest, “I, Dolours” is a testament: the only narration is Price’s voice. The film’s director, Maurice Sweeney, intersperses footage of Price during the interview—a pale woman with penetrating blue eyes, her hair short and platinum blond—with a series of evocative reënactments.

The members of the Unknowns were selected to the secret unit because they “could be trusted with very specific jobs, obeying orders without question,” Price says. The unit was run by a man named Pat McClure, she continues. But McClure “reported back to the officer commanding in Belfast—who would have been Gerry Adams.” One of Price’s responsibilities was transporting people who had been marked for death out of Northern Ireland and across the border to the Republic of Ireland, where they would be killed. In one chilling section of the film, she recounts driving two I.R.A. men, Seamus Wright and Kevin McKee, to their deaths. They had both committed what was regarded as the ultimate sin in the I.R.A.: becoming British informers. After they confessed, Wright and McKee were told that their lives would be spared, so they joined Price for that final ride without resistance, believing that they were going for a brief holiday in the south. “Ultimately, I believe they were shot,” Price says, adding, “We believed that informers were the lowest form of human life.” (The bodies of Wright and McKee were discovered, buried in an Irish bog, in 2015.)

When Moloney asks Price about Jean McConville, she insists that McConville, too, was an informer. The I.R.A. has maintained for decades that McConville was murdered because she had been supplying information to the British Army. The children of Jean McConville—who today are parents and grandparents themselves—have angrily challenged this assertion, pointing out that Jean was a widowed mother of ten who would have had no access to sensitive information, much less the time to pass it along. A report by the Police Ombudsman for Northern Ireland, from 2006, also found no evidence that McConville was an informer.

But Price insists that she was. In the film, she repeats an old story about how the I.R.A. had discovered a radio transmitter in McConville’s apartment, which she allegedly used to pass information to her handlers in the British Army. But Price also tells a new story: she says that several I.R.A. members were hauled into a barracks on Hastings Street, “to be identified by a person concealed behind a blanket.” The blanket had a slit in it, so that an informer could peer through and supply the authorities with the names of suspected paramilitary members. But the blanket “stopped short of her feet,” Price says—and the suspects realized that the person hiding on the other side was McConville, because they “recognized the slippers.” When she was interrogated by the I.R.A., McConville confessed, Price maintains, saying that she had agreed to help the British “for money.” (Whether the I.R.A. tortured McConville before extracting such a confession Price does not say.)

“Our first contact with her was to just pick her up,” Price says. Three members of the Unknowns—Price, Pat McClure, and a third—escorted McConville after her abduction in Belfast. McConville was not fearful for her life, Price notes, because they told her that she was not going to be killed but rather relocated by a charitable group, the Legion of Mary. McConville asked if her children could join her, and it was only at that moment, Price insists, that she realized that the widow whom she was transporting to her death had kids. Even so, she brought McConville to Dundalk, and handed her over to the local I.R.A. unit.

Until the release of this documentary, that was the extent of Price’s involvement in the McConville case, so far as the public was aware: she drove McConville across the border and turned her over to the people who would end her life. But, in the film, Price reveals that her culpability did not end there. “They didn’t want to do it,” she says, of the local I.R.A. men. “They couldn’t bring themselves to execute her. Probably because she was a woman.”

“So you guys had to do it?” Moloney asks.

“There had been a grave dug by the Dundalk unit,” Price says. So she crossed the border again, back into the south, along with Pat McClure and the third member of the Unknowns. I.R.A. members don’t think of themselves as terrorists, preferring the word “volunteer,” a term that encapsulates a sense of romantic sacrifice: combatants like Price were willing to volunteer everything—even their own lives—for the cause of a united Ireland. But, of course, they were willing to volunteer the lives of others, too, and, as Price describes the murder of Jean McConville, she slips into the third person. It is clear in the film that she is acknowledging her own responsibility, yet she recounts the act as though it was carried out by someone else. McConville “was taken by the three volunteers to the grave, and shot in the back of the head by one of the volunteers,” Price tells Moloney. She does not say, in the film, which of the three fired the fatal shot. But she suggests that, in the manner of a firing squad, they deliberately assumed a shared responsibility. There was a single pistol, which they passed around. “The other two volunteers each fired a shot so that no one would say that they for certain had been the person to kill her,” Price says. This was a comforting fiction: after McConville’s bones were discovered, in 2003, by a man walking along a beach in Louth, a coroner ruled that the cause of death was a single gunshot wound to the head, and only one bullet was recovered with the bones. If the other two did fire shots, they missed. “She was left in the grave,” Price says. “The local unit buried her.”

Pat McClure, the I.R.A. member present at the execution, is no longer alive. He moved to Connecticut in the nineteen-eighties, and died there in 1986. In “I, Dolours,” Price does not identify the third I.R.A. member, who may or may not be alive. But the authorities in Northern Ireland have arrested and subsequently released numerous people in connection with the McConville case—among them Gerry Adams, who was questioned for four days and then released without charges, in 2014. Only one person has been charged in association with McConville’s murder: a former I.R.A. official named Ivor Bell, who, the state alleges, played a role in aiding and abetting the operation. But Bell, who is in his eighties, has been diagnosed with dementia, and may never stand trial.

Moloney’s full interview with Price was turned over to the Police Service of Northern Ireland in 2013, as part of a court proceeding involving an oral-history archive at Boston College. (Moloney had deposited the Price interview at the university, in the assumption that doing so would keep it safe, not knowing that the university might one day turn it over to detectives in Belfast.)

“Do the disappeared haunt you?” Moloney asks Price, in the film.

“Yes,” she replies. “I think back on those who I had responsibility for driving away. I’m not a deeply religious person, but I would say a prayer for them.” Moloney asks if she regards such forced disappearances as a war crime, and Price responds, “I think it’s a war crime. Yes.”