The Intriguing Provo Connection In The Catherine Nevin Case – How Did She Know John Deery?

As my readers in the 26 Cos will know, the death was announced today of Catherine Nevin, the publican’s wife from Co Wicklow who was dubbed the ‘Black Widow’ by the Dublin media after her conviction for the 1996 murder of her husband, Tom Nevin.

She had brain cancer and was released from jail on compassionate grounds last year.

She was jailed for life in 2000 after being convicted of murdering her husband at their pub, Jack White’s Inn near Brittas Bay in Co Wicklow. Three men, William McClean, Gerry Heapes and John Jones, were allegedly solicited by her to carry out the killing, which she consistently denied.

What is especially intriguing about this claim is that she named one of the three men involved on behalf of the IRA in this scheme as John Deery (she called him Johnny Deery).

John Deery, as Provo followers will know well, was the IRA’s Director of Finance, the IRA’s money man who is rumoured to have ended up owning a casino somewhere in the Carribean.

That intelligence about John Deery is, to say the least, esoteric and the obvious question asks itself: how did someone like Catherine Nevin even know about John Deery, except that she had reason to?

Below is a March 2000 court report from The Irish Independent detailing Catherine Nevin’s evidence about all this: 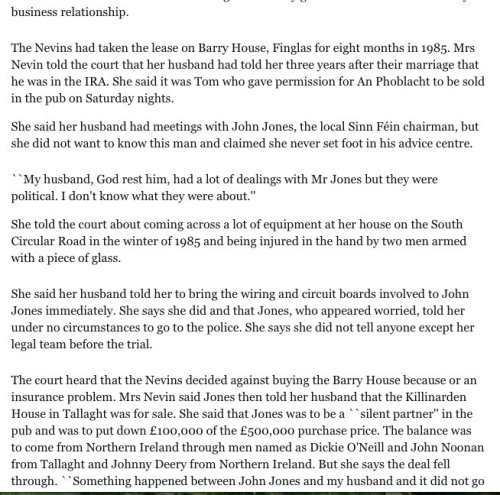