Kingsmills Killings: Look What I Found In The Archives!

The DUP should be a little careful with its commentary on the Barry McElduff affair in the next few days, methinks. This little story from February 1999, which involves the two Ian Paisleys – pere et fils – has somehow escaped the media in Ireland in the last wee while.

So it is worth putting back into circulation as a reminder that no-one in Northern Ireland has a monopoly on bad taste or causing offence – or in this case endangering and destroying another person’s life. 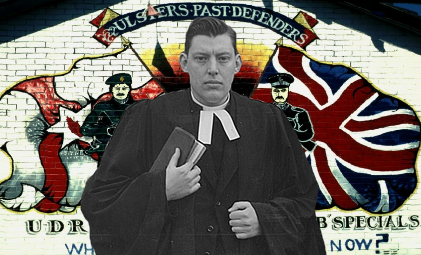 Ian Paisley – accused the brother of three men killed by the UVF of organising Kingsmills in revenge. His allegations were based on a bogus RUC dossier but he avoided any comeback by making his claim under the cover of House of Commons’ privilege.

Barry McElduff’s video stunt has certainly upset the relatives of those killed by the IRA and angered the sole survivor, Alan Black. But Ian Paisley Snr put an innocent man in mortal danger and ruined his life over wildly inaccurate allegations about the Kingsmills perpetrators.

Remember that old saying about people who live in glasshouses…..? Arlene Foster and Co should perhaps think on that before saying anything more about Mr McElduff.

Here is the Guardian report of the affair, dated February 12, 1999, written by John Mullin:

Eugene Reavey’s life was turned upside down 16 days ago. He first learned of it when a neighbour rang. She had caught Ian Paisley, leader of the Democratic Unionist Party, using parliamentary privilege to name him in the Commons as mastermind of one of the worst atrocities in Northern Ireland’s history.

It is the same in the farming world, where Mr Reavey, aged 51, a father of seven, makes his living from breeding French pedigree Limousin and Charolais cattle. He fears his business will collapse because he no longer travels to markets in Unionist areas. He fears a loyalist revenge attack and doubts whether anyone would do business with him. People will say there is no smoke without fire, he says.

Mr Paisley, quoting from a document he claimed was a police dossier, named Mr Reavey in connection with the Kingsmill massacre in 1976, when republican terrorists ambushed a minibus and shot dead 10 Protestant mill workers on a quiet country lane. Another Protestant survived, maimed for life, while a Catholic was allowed to flee.

But Sir Ronnie Flanagan, RUC chief constable, said Mr Paisley, who named 20 men in connection with IRA activity in south Armagh, was wrong. He denied the document Mr Paisley quoted was an RUC dossier, and it is believed it emanated from the now disbanded Ulster Defence Regiment.

After seeing Mr Reavey and Brendan Ferris, another accused, Sir Ronnie said: “We have no evidence whatsoever to connect them with the Kingsmill massacre and there are no outstanding matters that we would intend to interview these gentlemen about.” He is understood to be furious at Mr Paisley’s use of parliamentary privilege.

Mr Reavey was in mourning when the Republican Action Force, a cover name used by the south Armagh IRA when carrying out sectarian attacks, killed the workmen. Loyalists killed his three brothers, John Martin, aged 25, Brian, 22, and Anthony, 17, at the family’s house the previous night. He spent the day organising funerals.

“I have no idea why I would be named,” said Mr Reavey. “It baffles me. I have never been involved with any of the paramilitaries. None of the family has. Paisley is a despicable man. What he was fed was wrong. He should have checked his facts.

“We are terrified. My wife, Roisin, can’t sleep. She’s a teacher and it’s been difficult at work for her. This village is very close to loyalist areas, and about 30 people have been killed during the troubles on the road out there. I’ve hardly been out of the house.

“I was very impressed with Sir Ronnie Flanagan, but no matter what he says, there will be people who think Paisley’s word is sacrosanct. Mud sticks.

“What I want is for Paisley to withdraw his remarks in the Commons. I want an apology for the worry he has put my family through.”

Martin O’Brien, director of the committee for the Administration of Justice, a civil rights group, said: “MPs need to think long and hard before they play with people’s lives in this way.”

Detectives investigating the source of Mr Paisley’s accusations will interview him today. His son, Ian Paisley Junior, a DUP assembly member, said: “The report that my father quoted from was a confidential police dossier.

“There is not the slightest chance of an apology being offered.”

5 responses to “Kingsmills Killings: Look What I Found In The Archives!”