That UVF Letter To Haughey – Here It Is

Journalism is still alive and well in Dublin, I am happy to report, at least in the form of one reporter who knows a story when she sees one.

Today in the London Times’ Irish edition, Dublin-based columnist Ann Marie Hourihane has done what other journalists and their publications had so lamentably failed to do when the latest crop of state papers were released by the government last week: she took a photograph of the now notorious alleged UVF letter to Charles Haughey sent to him in 1987 when he was Taoiseach, and published it in her weekly column.

(Full disclosure: Anne Marie is a friend and a former colleague from our Sunday Tribune days)

I had lambasted the Irish media in these columns for failing to do just that on at least two grounds: this was a controversial document whose bona fides has been challenged by Loyalists; and the public had the right to see the full document so as to make their own judgement not just on its authenticity but its central claim, which was that MI5, the British spy agency, had encouraged the UVF to assassinate Haughey.

As it turns out there is a lot more in the letter that never made it into print or any other Irish media, and that was another criticism that I made: judgements on these important documents released each year were being made by reporters who might not know anything about the subject matter.

In consequence important detail might be missing. One way of dealing with this is for newspapers and electronic media to reproduce in full the various documents, a course made easier thanks to the internet. That way the public gets to read documents in their original form and are better placed therefore to judge their credibility.

In this case a fuller read of the UVF letter reveals all sorts of interesting detail, none of which I can remember appearing in any Irish media report:

Loyalist sources continue to cast doubt on the authenticity of the letter. One source close to the UVF had this to say to thebrokenelbow.com about it:

Re the letter, I thought the notion was nonsense, I think after seeing it my instinct is confirmed. The very thought that they would mail a letter about any subject in such a way is a bit ridiculous never mind the nature of the subject matter.

That it is laid out as some type of common internal administrative document and it is the first time anyone has ever seen such thing after so many arms finds, arrests etc says a lot I think. Also why type the whole thing and then handwrite various parts; seems too elaborate to me. Also it looks that maybe the top and bottom parts, which appear to be from a printer or computer, have been photocopied and the main text overlaid from a typewriter.

In terms of the content I have never met anyone who would give any credence to Wallace and Holyroyd, at least from personal experience. It purports to come from Mid Ulster yet refers to information in regard to Hanna and Desertmartin which would have been Belfast based and challenges the accepted narrative on both. In regard to Simpson, that’s news to me and if it related to Desertmartin as suggested, it wouldn’t be.

I’m not sure of the details re Haughey or whether such details would have been in the public domain, so not sure if that betrays its origin, but Id be very dubious of all of it. It reads to me like something republicans might like to have been true, but even that is a stretch given its bizarre nature.

Here is Anne Marie’s piece in today’s Irish edition of the Times which contains a copy of the alleged UVF letter:

Archives may be dusty but opening them lets in light

Every year we have to pretend to be excited about the release of state papers under the 30-year rule, but this year they really were exciting: a little bit too exciting, some people thought. They included the sensational revelation of a letter, contained in file 2017/10/34, which purported to come from the Ulster Volunteer Force. It was addressed, in rather shaky handwriting, to the taoiseach of the day, Charles Haughey, and stated that the UVF had been encouraged by British intelligence to assassinate him.

There are many strange things about this letter — not least the fact that it is typed on UVF notepaper, with the motto “For God & Ulster” printed at the bottom. Seasoned commentators on the Troubles, such as Ed Moloney, the former Irish Times and Sunday Tribune journalist, have expressed surprise that the UVF would write a letter at all, let alone one to an Irish taoiseach. In all his years covering Northern Ireland, Moloney said, he had never come across a letter from the UVF.

Balaclava Street, a loyalist blog that Moloney says is reliable, poured scorn on the letter, which is dated August 5, 1987, and speculated that it might have been written by opponents of the Anglo-Irish agreement trying to stir up trouble.

Nevertheless this document made the front page of many newspapers, with no discernible substantiating evidence from other sources.

On Tuesday, when the National Archive in Dublin opened after Christmas, I went in to see the letter, expecting the place to be thronged with excited researchers. Arriving just after noon I found myself only the third person in the lovely reading room, and no one had arrived to join us when I left two hours later. Although staff did say that they had been phoned by news organisations from around the world, all looking for the letter, the 1987 documents are not yet available online.

It seems strange that a country so obsessed by its own history is so far behind others in its attitude to and resourcing of research into its recent past. The UK releases its state papers after 20 years, so we are reading documents from London and Belfast a full decade in advance of our own. The Troubles always take centre stage in the release of our state papers, so this is particularly aggravating.

At one time journalists were only invited into the National Archive to view the newly-released papers in the days coming up to Christmas. Or they were invited in between Christmas and new year, which didn’t suit anybody either.

Now, journalists get access to the papers in early December. That gives them three weeks to check the stories they are going to print in the first days of the new year.

The files can arrive at the National Archive very shortly before what is called the media preview. The archive is entirely at the mercy of the government departments releasing the documents, which can arrive any time during the year, and some don’t arrive until the last minute. This has strong implications for the archive’s staff and their ability to pick out the documents that will be of interest.

Storage space has been cruelly limited and this affects the amount of documents the archive can store.

There are no plans to digitise all documents. According to John McDonough, director of the National Archive, a selection of 1987 documents will be online “in the first quarter” of this year. One former archivist told me: “Digitisation doesn’t solve everything.”

As it is, the present circumstances make the release of our state papers the poor relation when it comes to releases from national archives. It would be helpful if documents like the so-called UVF letter were available online so that they could be viewed in their entirety, and so that the context of the extracted quotes could be demonstrated.

For their part, archive staff would like journalists to cite the file numbers of the documents they are quoting: “It avoids ambiguity,” McDonough said. Only the Irish Examiner did so this year.

McDonough also points out that, like all cultural institutions, the archive is “coming out of a bad patch” with regard to funding, which stands at €1.5 million for 52 staff.

New legislation to amend the 1986 National Archives Act has already started its journey through the Oireachtas and should be law by the end of the year. This will instigate a 20-year rule, as opposed to 30. A project to provide the archive with more storage space will be overseen by the Office of Public Works and should be completed in three years.

As to the UVF letter, the printing of “For God and Ulster” at the bottom of it seems a lot of trouble to go to for a forgery. What do I know of these things — like most of the reporters covering the release of the state papers, almost nothing.

A paragraph of the letter states: “”We excuted [sic] some of our best men believing them to be traitors. Jim Hanna was killed as result of information given to us by MI5. Hanna was totally innocent and we killed one of our best volunteers”. 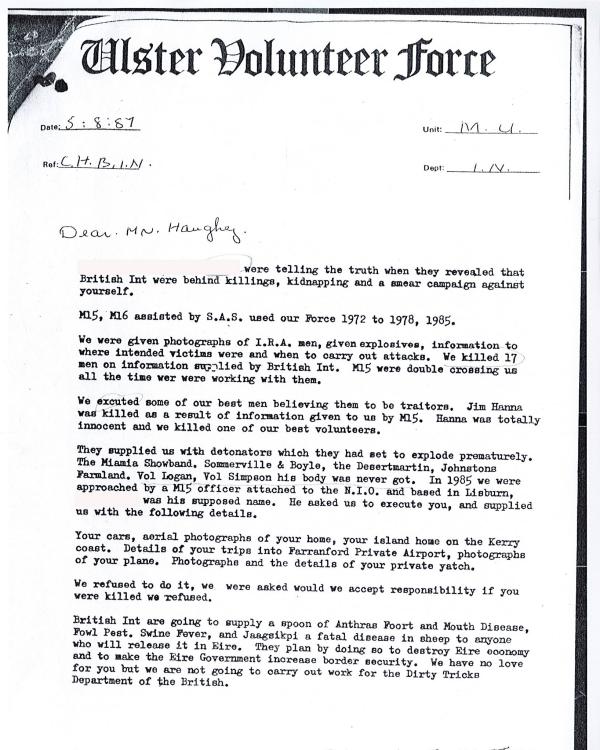 The letter, purportedly from the UVF to Charles Haughey, was released by Ireland’s National Archives under the 30-year rule

The authoritative listing Lost Lives states that James Andrew Hanna was killed on April 1, 1974. At the time the UVF denied killing him.

In the following paragraph, there is a listing of equipment the letter alleges was supplied to the UVF by MI5, including detonators. The next sentence simply says “Vol Logan, Vol Simpson his body was never got”. Again according to Lost Lives, there was a Charles Logan killed “when a UVF device exploded prematurely near Desertmartin” on November 18, 1973. The letter specifies Desertmartin. I could not find any listing for a Simpson in Lost Lives that would correspond to a death for a “Vol Simpson”. There are ten people by the name of Simpson listed among the dead in Lost Lives.

State papers are a national resource. They will of course contain unsubstantiated gossip and forgeries, as well as the truth. But at the very least they deserve respect from the authorities and investigation by journalists.

3 responses to “That UVF Letter To Haughey – Here It Is”