The man pictured below, with his back to the camera, likes to be pissed on by Russian prostitutes, according to a former MI6 officer. He has been divorced more times than most people have flown in aeroplanes. He has boasted of grabbing women ‘by the pussy’, has been bankrupt so often no US bank will lend him money and his business partners have included east European dictators and Russian mobsters.

Yet here, in a photo published by Religion News Service, he is in the Oval Office of the White House surrounded by American evangelicals, some of whom have their hands on him, and they are praying for his success as US president. I must say my first thought was: ‘What on earth is going on in his mind at this moment, what does he really think about these people, with whom he has absolutely nothing in common’?

So the caption contest is just that. What is Trump thinking at this moment? The best responses will be published and the top three will get the customary prize, a lifetime subscription to thebrokenelbow.com. 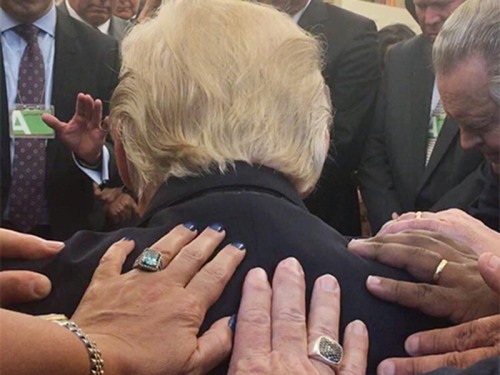 Evangelical supporters place hands on and pray with President Trump in the Oval Office of the White House. Photo courtesy of Johnnie Moore

6 responses to “A Trump Caption Contest”