A Seedy Little Story Of Britain’s Dealings With Libya

Do you remember all the fury and grief in Britain that followed the April 1984 murder of WPC Yvonne Fletcher at the hands of Libyan diplomats who shot her dead from an upper window of the Libyan embassy in London? Those vows to bring those responsible to justice?

A mortally wounded WPC Yvonne Fletcher is comforted by colleagues outside the Libyan embassy, London in 1984

Well, it seems that the Metropolitan police had in their grasp a man who knew more about the killing than most Libyans but let him go without using his information to bring prosecutions ‘for reasons of national security’. 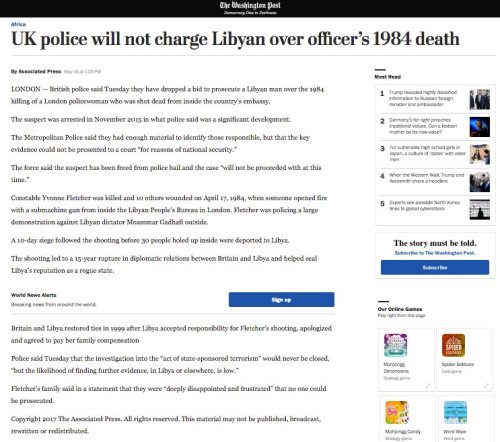 The Guardian reported that the man was Dr Saleh Ibrahim Mabrouk, a former minister in Gaddafi’s government who had, it seems been ordered in the 1980’s to infitrate anti-Gaddafi elements in Europe and report back to Tripoli. The police refused to confirm the Guardian story.

Mabrouk was with the demonstrators outside the embassy on the day Fletcher was killed and was deported from the UK after the murder. But that order was later lifted, allowing him to return to Britain under an initiative to improve relations with Libya that formed part of a deal ultimately aimed at bringing the Libyan Lockerbie bombing suspects to trial.

One possible translation: Mabrouk agreed, with Tripoli’s permission, to assist British intelligence identify jihadist elements amongst the Libyan expat population in London, possibility agreeing to infiltrate their ranks – as he had the anti-Gaddafi elements in the 1980’s – and facilitating their deportation to jails in Libya for interrogation by methods so unsavory they could not be directly countenanced by MI6 or their counterparts in the CIA.

A little corner of the curtain covering Britain’s failure to pursue compensation for victims of the IRA’s use of Libyan Semtex has, perhaps, been lifted. All under Tony Blair’s watch, mind you. Nice one Ton!