Note To Journalists: Follow Jimmy Breslin’s Rule And You’ll Get The Story…..

I was sad to read today of the death, at 88, of Jimmy Breslin, one of America’s most talented – and colourful – writers and journalists. 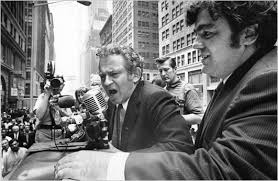 Jimmy Breslin (right) in his heyday, pictured with Norman Mailer

He wrote for a variety of news outlets, notably The New York Daily News and Newsday, but he was also a prolific novelist. One of his novels, ‘World Without End’, was set in Belfast at the height of the Troubles and is based on the experience of a white, racist Irish-American cop who visits distant relatives in the North and in the process has his prejudices challenged by a taste of life on the receiving end of indignities he is more used to dishing out.

Breslin spent some time in the North meeting people and getting a flavour of the place before writing the novel and some of his characters were based on friends and acquaintances. It was fun, therefore, to read the book and work out who was who!

According the the obit in today’s New York Times, Breslin had a simple rule for finding the story, one borrowed from the world of sports writing but which applies equally well to all reporting. It is a rule I am glad to say I have tried to follow myself. It never did Breslin any harm, nor me.

This was it: ‘Avoid the media scrum gathered around the winner, he would advise, and go directly to the loser’s locker.’

One response to “Note To Journalists: Follow Jimmy Breslin’s Rule And You’ll Get The Story…..”