America First was an isolationist, anti-semitic, pro-Nazi-type organisation that flourished in the US during the 1930’s as Hitler and Mussolini consolidated power in Germany and Italy respectively, and Imperial Japan invaded China and other Asian countries.

Amongst its members were notorious anti-semites like Henry Ford and isolationists like Joseph Kennedy (father of the Irish-American clan), Charles Lindbergh and Walt Disney. It was dissolved within days of the Japanese attack on Pearl Harbor in December 1941.

In his inauguration speech yesterday, Donald Trump twice invoked the slogan ‘America First’ to illustrate his own brand of economic nationalism and political isolationism.

The photo below is the image that the words will conjure in many American minds, especially in the African-American community. 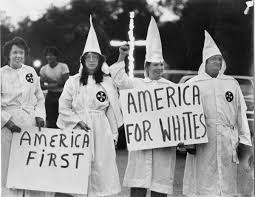