Trump Didn’t Win, Hillary Lost – Democratic Voters Did Not Turn Out For Her

Thanks to CM for bringing this post on Imgur to my attention (see below).

Assuming the stats are correct the conclusion is pretty undeniable: Donald Trump did not win, Hillary lost.

The stats show that Trump did not perform any better, in fact slightly worse, than his two most recent Republican predecessors, John McCain and Mitt Romney.

But Hillary Clinton’s vote dropped dramatically from the levels reached by Obama in the past two elections. Had she managed to persuade just a fraction of Obama’s two majorities to come out for her, she would now be choosing her White House transition team.

Here are the numbers (click on the panel to enlarge): 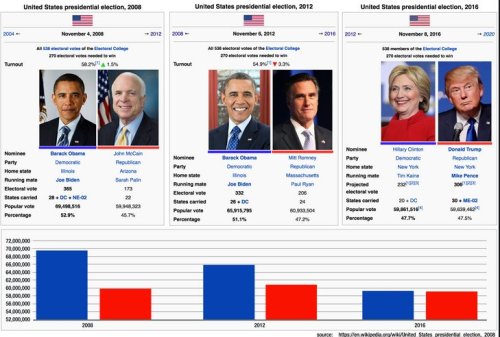 But look at Obama’s vote and contrast it with Hillary’s. In 2008 he won 69.4 million votes and in 2012, 65.9 million. But Hillary’s vote was 59.8 million, nearly ten million votes short of Obama’s performance in ’08 and some 6 million votes less than his total four years later.

The conclusion is clear: Hillary lost by failing to energise Democrat voters who had turned out for Obama.

So, how to explain that? Well, Hillary’s unpopularity, the fact that she doesn’t ring people’s bells in the way Obama did, her association with the economic policies of her husband and so on, were certainly factors.

But I would make a bet that a hefty slice of the missing Dems from ’08 and ’12 are young Black voters who a) now don’t have a Black candidate to vote for and for whom Hillary Clinton was no substitute and b) blame Bill and Hillary Clinton for the policy known as mass incarceration so movingly and powerfully written about by Michelle Alexander in ‘The New Jim Crow’.

America, under the policy pioneered during the Clinton years known as ‘the war on drugs’, has evolved into the most imprisoned society on the globe. It accounts for 5 per cent of the world’s population but 22 per cent of its felons, the vast majority of whom are Blacks or Latinos.

Mass incarceration has devastated Black communities not just because of the many millions who suffer the lengthy jail terms which are part and parcel of the US justice system but because jail in America is a punishment that keeps on punishing.

On release convicted felons lose the right to public housing, to food stamps and are legally obliged to disclose their criminal record whenever applying for work. This, and other penalties, combine to ensure that a jail conviction in America means a life sentence of poverty.

Felons also lose the right to vote and estimates of the number denied to right to participate in the democratic process reach as high as six million, the majority of whom are Black.

Hillary Clinton could have used those votes last Tuesday. Perhaps the greatest irony of the election then, would be if she was denied the White House thanks to the harsh prison policies her husband introduced, and which she supported over twenty years ago.

History has a habit of returning to bite those who create it. This may have been one of those times.

One response to “Trump Didn’t Win, Hillary Lost – Democratic Voters Did Not Turn Out For Her”