A very interesting and disturbing piece, at least for those who care about principled journalism, from the Center for Public Integrity about US journalists backing the two candidates in the presidential election.

Not just with their coverage but with their pocket books. And no surprise either that of the two main runners, Hillary Clinton is the overwhelming favourite of the fourth estate. Another way in which this election will leave America in a different place. 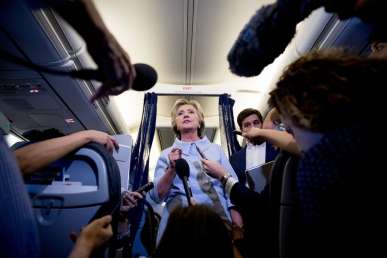 What Nussbaum didn’t disclose in her dispatches: she contributed $250 to Democrat Hillary Clinton in April.

And Carole Simpson, a former ABC “World News Tonight” anchor who in 1992 became the first African-American woman to moderate a presidential debate, is not moderate about her personal politics: the current Emerson College distinguished journalist-in-residence and regular TV news guest has given Clinton $2,800.

Conventional journalistic wisdom holds that reporters and editors are referees on politics’ playing field — bastions of neutrality who mustn’t root for Team Red or Team Blue, either in word or deed.

But during this decidedly unconventional election season, during which “the media” has itself become a prominent storyline, several hundred news professionals have aligned themselves with Clinton or Trump by personally donating money to one or the other.

In all, people identified in federal campaign finance filings as journalists, reporters, news editors or television news anchors — as well as other donors known to be working in journalism — have combined to give more than $396,000 to the presidential campaigns of Clinton and Trump, according to a Center for Public Integrity analysis.

Nearly all of that money — more than 96 percent — has benefited Clinton: About 430 people who work in journalism have, through August, combined to give about $382,000 to the Democratic nominee, the Center for Public Integrity’s analysis indicates.

About 50 identifiable journalists have combined to give about $14,000 to Trump. (Talk radio ideologues, paid TV pundits and the like — think former Trump campaign manager-turned-CNN commentator Corey Lewandowski — are not included in the tally.)

Generally, the law obligates federal candidates only to disclose the names of people making contributions of more than $200 during a single election cycle, along with their addresses and employer and occupation. That means it’s likely that many more journalists have given the Clinton or Trump campaigns cash, but in amounts too small to trigger reporting requirements.

Together, these journalist-donors work for news organizations great and small, from The New York Times to sleepy, small-town dailies. While many of them don’t primarily edit or report on political news, some do.

And each news professional offers his or her own unique take on a basic question: Why risk credibility — even one’s livelihood — to help pad a presidential candidate’s campaign account?

Simpson today describes herself as an “academic” and “former journalist.” Therefore, she says she’s “free to do many things I was prohibited from doing as a working journalist,” including giving money to Clinton.

“I have been waiting for the day our country would have a woman president,” Simpson said. “When Hillary decided to run, I was delighted because I couldn’t think of a more qualified woman to seek the high office.”

Waldron, of KFMB in San Diego, describes himself as a “lower case ‘l’ libertarian,” and believes journalists like him who both vote and make small-dollar political donations are within their rights to do so.

Why give money to Trump, a man who Forbes last month estimated is worth $3.7 billion? To fight against Clinton.

“I’m a big, big fan of the United States Constitution,” Waldron said, and Clinton “seems to care very little for the Constitution.”

Said The New Yorker’s Nussbaum: “I rarely write about politics, but it’s true that the RNC-on-TV posts verged on punditry, and I can understand the concern about disclosure.”

Almost any U.S. citizen or foreign national with a U.S. green card may, by law, give money to a federal political candidate.

But major news organizations often restrict, if not prohibit, their journalists (and occasionally non-journalist employees) from making political campaign contributions.

The news organizations’ overriding concern: Such contributions will compromise journalists’ impartiality or seed the perception that journalists are biased toward certain politicians or political parties.

The New York Times’ ethics handbook declares that its staffers may not give money to, or raise money for, political candidates or election causes. “Any political giving by a Times staff member would carry a great risk of feeding a false impression that the paper is taking sides,” it reads.

The Associated Press is even more blunt with its journalists, stating that “under no circumstances should they donate money to political organizations or political campaigns.”

CNN spokeswoman Bridget Leininger said the cable network “does not allow editorial staff to contribute to candidates or political parties.”

A review of several dozen newsroom ethics policies indicates many other notable news outlets have similar no-political-donations mandates, including The Dallas Morning News, Houston Chronicle, Los Angeles Times, National Public Radio, ProPublica, San Antonio Express-News, The Seattle Times and Tampa Bay Times. (The Center for Public Integrity’s staff handbook states that all employees are “prohibited from engaging in political advocacy or donating to political candidates at any level of government.”)

And while some journalists do give politicians money, the vast majority do not.

“Not having that affiliation helps me feel more independent,” said Margaret Sullivan, The Washington Post’s media columnist, and a former New York Times public editor and Buffalo News editor and vice president. “I wouldn’t do it, and when I was supervising a newsroom, we had rules against it. It’s a good discipline, I think.”

Although journalists may have a right to give money to political candidates, the act of doing so “easily could be perceived as a conflict of interest,” said Paul Fletcher, editor-in-chief of Virginia Lawyers Weekly, who recently served as president of the Society of Professional Journalists.

So concerned about bias was former Washington Post Executive Editor Leonard Downie Jr. that he didn’t even vote.

Strict political contribution policies are not, however, universal among news organizations.

What’s patently prohibited at one news organization may be perfectly permissible at another.

Some outlets also differentiate among newsroom employees: A reporter covering a governmental agency, for example, might be punished for cutting checks to a U.S. Senate or presidential candidate. But the resident arts correspondent or star sports writer? Play ball.

Take Orange County Register restaurant critic Brad Johnson in California, who this year made dozens of small–dollar contributions to Clinton’s campaign that total more than $750.

Digital First Media’s Southern California News Group, of which The Orange County Register is a part, expressly prohibits news reporters from engaging in campaign activities “related to candidates, campaigns or issues which they may cover,” news group Executive Editor Frank Pine said. But while Johnson fits the broad definition of “journalist,” Pine doesn’t consider Johnson a news reporter — and therefore, he’s free to give the Clinton campaign money.

Johnson concurs: “I don’t cover politics. I don’t do investigative reporting. I’m just interested in finding the best pad thai and sharing what I find with our readers.”

One response to “US Journalists Shower Hillary With Financial Donations”