So, What’s In Denis Donaldson’s Journal? 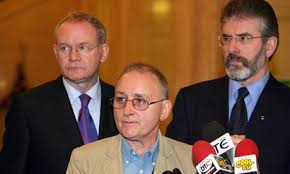 Flanked by Martin McGuinness and Gerry Adams, Denis Donaldson admits to having been an RUC informer

I hadn’t realised that when dissident gunmen killed former Provisional IRA and Sinn Fein activist Denis Donaldson in April 2006, the outed British spy was in the midst of writing a ‘private journal’ which his family seem to believe could shed light on who outed him as an agent, and why.

The family’s solicitors, Madden & Finucane issued a statement yesterday, marking the tenth anniversary of his death, in which they urged the Irish police to release the journal to the Police Ombudsman’s office in Belfast. The Ombudsman, they say, is pursuing a ‘definite line of enquiry’ concerning the identity of who outed him.

Donaldson, who had been seconded to Noraid’s offices in New York in the late 1990’s where he was first suspected of being an informer, was arrested in 2002 when the RUC disrupted an IRA spy network based at the Stormont parliamentary complex.

Donaldson’s home was raided and a cache of documents retrieved, including, it is believed, a copy of a jail journal written by UDA double agent, Brian Nelson which had been stolen from his jail cell at Crumlin Road prison.

Sunday World journalist, Hugh Jordan tracked Donaldson to his Glenties cottage in March 2006, when this photo was taken

Three years later Donaldson’s trial collapsed when prosecutors were obliged to reveal to lawyers for other defendants that their co-accused was a British government agent. Gerry Adams announced the news on RTE and Donaldson then claimed he had been turned when compromised during ‘a vulnerable’ period in his life.

Irish government sources have told thebrokenelbow.com of their belief that Donaldson was the victim of a gay honey-trap set by British intelligence during one of Donaldson’s trips to the Middle East. He visited the Lebanon in the late 1980’s in an effort to secure the release of Belfast hostage, Brian Keenan who was held by pro-Hezbollah guerillas.

After confessing his secret past Donaldson went into hiding and sought refuge in a family-owned cottage near Glenties, Co Donegal. He was found there shot to death, apparently by Real IRA assailants who used a shotgun to avoid ballistics traces, on April 4th, 2006.

Had his killers paused to search the cottage they might have found the unfinished journal. Instead it fell to an Garda Siochana to make that discovery.

The document, and its secrets, would be disclosed if an inquest was to be held but so far the Irish police have successfully sought adjournments on no less that eighteen occasions.

The Donaldson family are now asking the Gardai to give the document to the Ombudsman’s office.

As to whose interests the Irish police are protecting by withholding the journal those of British intelligence would be high on most people’s list. There are strong rumours of a major rift at the time of Donaldson’s arrest between MI5, who wanted Donaldson left untouched, and the then head of Belfast RUC Special Branch who suspected that Donaldson had been holding back on his handlers, and may even have decided to no longer co-operate with them.

If true, then the outing of Denis Donaldson may have been done pour encourager les autres. Is this the secret that an Garda Siochana is protecting for the British?

By the way, good luck with all that dealing with the past!