Regular readers of this blog will be aware that I have, more than once, made mention of an infamous tȇte-à-tȇte between SF President Gerry Adams and the Goldman Sachs CEO, Lloyd Blankfein, that took place on the margins of a Hillary Clinton love-fest organised by Irish Voice publisher Niall O’Dowd in Manhattan last St Patrick’s Day or thereabouts. 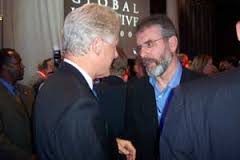 My impeccable source for this story, who must remain unnamed, told me that Blankfein asked Gerry Adams for a private chat and ten minutes later emerged to tell friends that not only had he been impressed by the Provo chief but ‘re-assured’.

Re-assured about what, we can only guess at. Well, actually that’s not too difficult.

Researchers at Goldman Sachs were about to publish a report voicing concerns that if Sinn Fein did well in the next Irish general election they might well follow the example of Syriza in Greece and Podemos in Spain and threaten to stop bailing out the banks.

Naturally, Blankfein would have worried about this, knowing that if Sinn Fein went down this road others might be tempted to follow suit with possibly disastrous financial consequences for Goldman Sachs.

Goldman CEO Lloyd Blankfein is greeted by Hillary Clinton at a meeting of the Clinton Global Initiative.

Sinn Fein’s inclusion in the group of small but increasingly popular radical European political parties opposed to the austerity policies that accompanied/facilitated the bank bailouts, had been a source of growing concern for the world’s elites, as evidenced in this 2012 Financial Times piece headlined: Sinn Fein joins Ireland’s austerity backlash.

Explaining that his party’s route to power in Ireland could come via a public backlash against austerity policies, the SF chief told the paper:

“It may not be a rush to the barricades but there is a slow revolution taking place,” Mr Adams told the Financial Times in an interview.

It is hard to read the following analysis, taken from the columns of yesterday’s Irish Times, of the Sinn Fein election manifesto for the general election later this month and not conclude that the re-assurance Blankfein sought and got from Mr Adams was to the effect that there was no reason to worry about overheated newspaper articles like that.

Gerry and the boys would see that the banks were looked after. No Syriza nor Podemos are Sinn Fein. Well, actually, maybe Syriza…….

I have argued many, many times in these columns and elsewhere that you cannot begin to understand Sinn Fein unless you realise that politically it is a chameleon. It believes in nothing, has no ideological roots and loyalties, can hold one view one day and a completely different one the next, and that the stance it decides to take is determined solely by its potential to attain one overriding objective: power and the office that comes with it.

Like a chameleon, Sinn Fein changes its colours to suit its environment. So it has been with the Irish banks and the bailout.

SF now accepts legal targets for debt must be met

Sinn Féin’s manifesto marks something of a change of tack.

The party relentlessly opposed the painful post-crash austerity drive, and it campaigned loudly against Europe’s fiscal treaty in the 2012 referendum. Now it claims to comply with stringent budget rules laid down in that treaty, rules which will seriously curtail the next government’s room for manoeuvre.

It seems, therefore, that Sinn Féin accepts that legal targets vis-à-vis the continuous reduction of deficits and debts must first be met before any new money becomes available in any given year.

Doing that while delivering a huge expansion in government programmes is a very tall order indeed, but it’s the same for all parties. It’s still a shift for Sinn Féin, which is viewed with distrust in business circles and faces political attack for lacking economic credibility. It will still take a very long time to convince its most ardent critics.

The party takes as read the Department of Finance assessment that the opening net “fiscal space” for the next five years is €8.6 billion. Via a swathe of new taxes, including a 7 per cent levy on income above €100,000, Sinn Féin would add €1.71 billion per year to the €8.6 billion. Sinn Féin assumes another €366 million would come from public sector savings, never easy. Having pressed for a wealth tax on net assets years ago, however, Sinn Féin now pledges only to “examine” such a tax in government.

Sinn Féin’s promises, like those of other parties, assume no disruption to growth. It takes as a given a Department of Finance forecast that 188,000 new jobs will be created, but argues that 20,000 more posts will be created in “frontline” services and that another 38,000 posts will flow from its €7.4 billion capital programme. Easy to say; difficult to do.
Sinn Féin would eliminate the local property tax and water charges. It would remove 277,000 workers earning less than €19,572 from the universal social charge but retain USC on other earnings.

It would introduce free GP care for 250,000 “or more” per year, and it would make prescription drugs “free for everyone”. Housing initiatives include the construction of 70,000 new social units.

These proposals, and more, assume that a Sinn Féin government takes in a good deal more revenue from taxpayers. In that sense Sinn Féin is a tax and spend party, prompting Fine Gael to declare its plan would detonate a “tax bomb” which would wreck growth. Fianna Fáil charged that the plan would scare off multinational investors.

New current spending programmes amount to €6.35 billion;€3.1 billion would go to capital plans.
Sinn Féin does not account for up to €1.5 billion in anticipated benefits from a loosening of EU budget targets.

In line with the Department of Finance, it assumes the starting “fiscal space” for 2017 is €500 million. To that it would add €289 million in a year-one yield from the 7 per cent levy on an individual’s income above €100,000. Further unspecified monies would be raised from charges such as a sugar tax on drinks.

The 1 per cent tax on betting would rise to 3 per cent. There would be a staggered reduction of private pension tax relief.

Business owners would pay a 15.75 per cent employers’ rate of PRSI on salary in excess of €100,000. The rates of capital acquisitions tax and capital gains tax on passive investment would rise.

The total anticipated yield is set out in the manifesto, but the yield from individual measures is not.