An intriguing article that poses more questions than it answers, appeared in the Dublin-based Village magazine at the very end of 2015 hinting, or perhaps insinuating is a better word, that former DUP First Minister, Peter Robinson agreed to negotiate the restoration of the Stormont power-sharing government in the face of Sinn Fein threats to expose his role in the NAMA scandal.

The article also hints – and this time hint is the appropriate word – that Robinson’s resignation as First Minister was not unconnected to the threats.

What makes the article really compelling is its author. It was written by Frank Connolly, perhaps the most controversial Irish journalist in recent years, whose alleged associations with Sinn Fein and the Provisional Movement in general have been such as to make it a reasonable assumption that his sources for the article were at an impeccably high level in that organisation.

A reminder of who Frank Connolly is: Back in August 2001, a month before 9/11, three Irishmen were arrested at Bogota international airport in Colombia. The three had established links to the Provos. Co. Donegal man, James Monaghan, at 56, the oldest of the three was a former IRA Director of Engineering, the department which manufactured explosives and improvised weapons. The other two were Martin McCaughey, from Co. Armagh, who survived the hayshed shooting during the RUC’s infamous ‘shoot to kill’ episode in 1982 and third was Niall Connolly, a Dubliner and fluent Spanish speaker who was Sinn Fein’s Latin America representative and a resident of Cuba.

The Irishmen – by now dubbed The Colombia Three – were charged with providing assistance to the FARC guerilla movement, a charge they were acquitted of, but found guilty of traveling on false passports. They were sentenced up to 4 years in jail but were granted bail. While free they escaped from Colombia and made it home to Ireland.

Fast forward four years or so to the winter of 2005 and the then Minister for Justice in Dublin, Michael McDowell lets it be known, via leaks to the media and then in a statement, that there was a fourth member of the Colombia Three – and he runs an ostensibly independent research body which McDowell, and others, suspect is a really front for Sinn Fein.

Frank Connolly, headed up an organisation called The Center for Public Inquiry (CPI), whose brief was to “…investigate matters of public importance in Irish political, public and corporate life” It was established in February 2005 and was largely funded by the American billionaire philanthropist, Charles ‘Chuck’ Feeney, who had also given considerable political and financial help to Sinn Fein, especially in America.

McDowell’s allegation was sensational. In April 2001, four or five months before The Colombia Three were arrested, three Irishmen had, according to the Colombian authorities, entered the FARC-controlled area of the country. They were Niall Connolly, Padraig Wilson, a West Belfast IRA member, a close confidante of Gerry Adams and a former OC of IRA prisoners in the Maze, while the third was Frank Connolly, now the executive director of the Centre for Public Inquiry.

All three, including Frank Connolly, had traveled on false Irish passports, McDowell alleged. Connolly denied the charges but after ‘Chuck’ Feeney met with then Taoiseach Bertie Ahern and Michael McDowell, he withdrew funding from the CPI and it folded.

So when a figure like Connolly makes apparently well-sourced, albeit anonymous claims that SF pressure led to the ‘Fresh Start’ deal and perhaps even to Peter Robinson’s resignation, it is worth paying attention. Who knows there might even be a journalist or two in Belfast ready and able to stir themselves to discover whether this is true or not!

One question they might consider addressing is this: ‘If Sinn Fein did imply or say to the First Minister that the party “would not look kindly on any Robinson NAMA delinquencies, if he did not move expeditiously to get the Executive back on track”, was that threat withdrawn when the ‘Fresh Start’ deal was cut?’

Anyway, here is Connolly’s article in The Village: 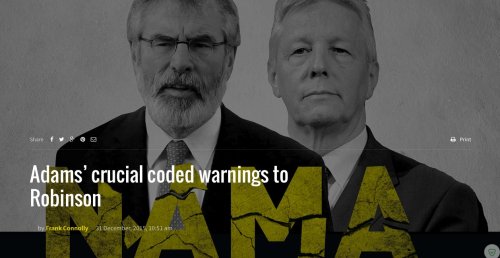 Cushnahan was involved in the preparation of the Eagle portfolio in his capacity as a member of the NIAC of NAMA while Watters had intimate knowledge of the individual properties and their potential values and his firm McClure Watters provided advisory services to the agency.

While each of the five has denied the extraordinary claims about alleged kickbacks there is a view that the announcement last month by Robinson of his retirement from politics next year was influenced in no small part by the Project Eagle affair.

Robinson’s withdrawal in September from the power-sharing government threatened to bring down the political institutions in the wake of various crises including alleged IRA involvement in the killing of Belfast man, Kevin McGuigan, the earlier killing of Sinn Fein member Jock Davison and an ongoing battle with Sinn Fein over welfare cuts. By November, these and other issues were resolved after intensive discussions involving the Northern parties and the Irish and British governments and during which the “fee payments” allegations hung like a dark cloud over the first minister.

In a mid-September statement after Robinson was named as the intended recipient of a £7.5 million sum lodged by Coulter in an Isle of Man account in connection with the Project Eagle sale, Sinn Féin leader, Gerry Adams made it clear that his party had serious questions for the DUP leader that would not go away anytime soon.

Speaking at a public meeting in Drogheda in response to the initial reluctance of unionists to participate in all-party talks, Adams remarked:

“In July, serious concerns arose around the sell-off by NAMA of its northern loan book – valued at £4.5 billion – for a third of that amount, amid allegations that a senior politician in the north was to benefit from this.

“Sinn Féin could have decided at that point to walk away from the Executive. We didn’t. We asserted the primacy of due process and the need for these very serious allegations of political corruption to be fully investigated properly by the relevant Assembly and policing agencies”.

In a comment that went largely unmentioned in the Dublin media he continued:

“The sell-off of NAMA’s northern loan book involves both the Minister for Finance in Dublin as well as senior ministers in the north. The allegations of wrong doing are very serious”.

The talks ended six weeks later with a deal on welfare and spending as well as policing issues and the unexpected announcement by Robinson that he is to leave the stage in May before the assembly elections.

In late September, Adams also met with the Office of the New York State Comptroller which has $50m invested in Cerberus to brief them on the controversy surrounding Project Eagle. It is understood that the Comptroller then raised the issue with senior executives of Cerberus who were apparently not impressed by the Sinn Fein leader’s intervention. Neither was Peter Robinson by all accounts.

Sources told Village that these two events were intended to telegraph to Robinson that Sinn Féin would not look kindly on any Robinson NAMA delinquencies, if he did not move expeditiously to get the Executive back on track

One response to “Did Sinn Fein Force Peter Robinson To Resign Over NAMA Scandal?”