Sean O’Callaghan Has Written A Book About James Connolly. Honestly!!

He is one of the most notorious British agents of the Troubles (not counting Freddie Scappaticci and the estimated one-in-three IRA members who were on the payroll of various British intelligence agencies by the time the peace process got serious.)

Sean O’Callaghan’s infamy derives not so much from his betrayal of the Marita Anne arms shipment in 1984, as the book he subsequently wrote – The Informer: The True Life Story of One Man’s War On Terrorism – which annoyed the IRA leadership with embarrassing allegations and gossip about matters that, true or not, cast a baleful light on how the organisation did its business.

Published by a Random House imprint it is to be launched next Wednesday in London, at the headquarters of Policy Exchange, a leading Tory Party think tank.

Policy Exchange, co-founded by Tory Minister Michael Gove and once led by Daily Telegraph editor Charles Moore and later by Bush adviser David Frum (he of ‘the axis of evil’ speech), is now headed by Dean Godson, biographer of David Trimble and well known for his support of neoconservative causes, not least Israel’s unrelenting belligerence towards the Palestinians, and a biting hostility to British Islam. 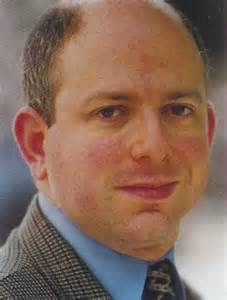 Policy Exchange has been described by The Daily Telegraph as, “the largest, but also the most influential think tank on the right” and is said to be David Cameron’s favourite source of policy ideas.

O’Callaghan played an important role fueling the British neoconservative analysis of the Irish peace process. This was based upon the idea that Gerry Adams & Co were really fooling the British, Irish and American governments into thinking they were genuine about peace while all the time waiting for the opportune moment- viz. a weakening of British will – to resume the IRA’s armed campaign.

The governments were therefore foolish, said the neocons, to engage in dialogue with the Provos, just as the US government would be foolish to encourage dialogue with Palestinians, Iranians and so on. Terrorist groups/regimes were unfailingly duplicitous, should never be talked to and must always be opposed by force of arms. Imagine Netanyahu stalking the streets of Belfast and you get the idea.

O’Callaghan’s role was to provide evidence of this duplicity even though it had been many, many years since he had access to the IRA’s inner councils. In truth he had no idea what was in the mind of Gerry Adams etc, but that was a minor detail.

The passage of time, if not an outbreak of common sense, has demonstrated how ludicrous was this neocon analysis. A moment’s reflection would have revealed an essential truth: you never tell lies to people who are predisposed to disbelieve you. You only deceive those who think every word you utter is gold-plated truth.

But what then to do with Mr O’Callaghan? After all there aren’t too many IRA veterans around who are so amenable to neocon blandishments. Might as well use him for something!

Very interesting on how fanaticism can develop within a community, and especially relevant today.

That comment, underlining ‘fanaticism’, makes me wonder if the purpose of this exercise is to demonstrate how James Connolly and Jeremy Corbyn are really cut from the same extreme cloth. When you consider how much ink Policy Exchange’s big fan, The Daily Telegraph, has spilled documenting the various links between the Provos and the Corbyn team, the idea doesn’t seem so far-fetched.

Or, perhaps he is really talking about the similitude of James Connolly and the Prophet Mohammed. 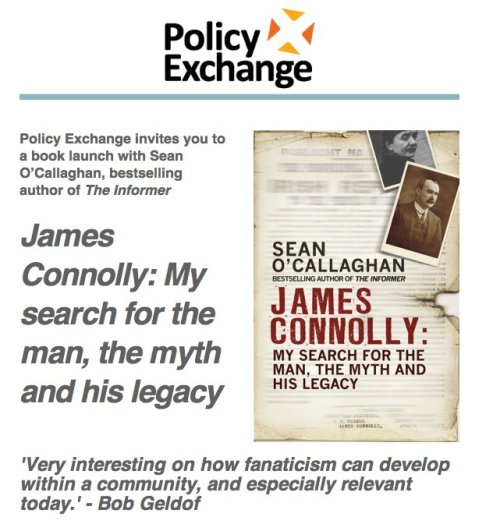 Policy Exchange is delighted to welcome Sean O’Callaghan to the Ideas Space to launch his new book, James Connolly: My search for the man, the myth and his legacy. Sean O’Callaghan, a former senior member of the IRA, described as “the most important intelligence agent in the history of the Irish State” tells the story of revolutionary James Connolly, his role in the 1916 Easter Rising, and his subsequent influence both on O’Callaghan himself, and on 20th century Irish and British politics. Sean’s talk will be followed by a few words from Dr John Bew, Reader in History and Foreign Policy at the War Studies Department at King’s College London and Director of the International Centre for the Study of Radicalisation and Political Violence.

17 responses to “Sean O’Callaghan Has Written A Book About James Connolly. Honestly!!”