At last, The Irish Times has a real story! Amazing! Read and enjoy, but bear in mind that anyone who suggests or insinuates that Marty has been telling lies is clearly an enemy of the peace process and should be exposed and denounced as such. 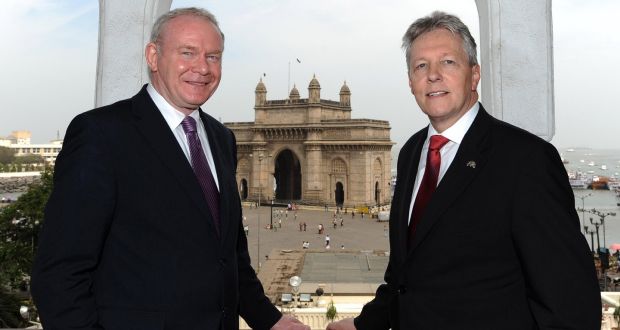 Peter Robinson and Martin McGuinness took part in a conference call with Minister for Finance Michael Noonan to discuss the sale of Nama’s Northern Ireland portfolio.

In records released by the Department of Finance on Wednesday night, a telephone log from January 2014 lists the three as participants in a conference call that took place at the request of then Northern First Minister Mr Robinson and Deputy First Minister Mr McGuinness.

Last week, Mr McGuinness told the Stormont inquiry investigating the sale of the Project Eagle portfolio he had been “kept in the dark” over the transaction.

Mr McGuinness said it was “totally and absolutely wrong” to say he was fully briefed about the Nama sale process from start to finish.

The controversial sale of the £1.2 billion (€1.6 billion) Project Eagle portfolio to US firm Cerberus is the subject of both criminal and parliamentary investigations in the North.

The inquiries arose after TD Mick Wallace claimed during the summer that £7 million transferred from a Belfast law firm involved in the transaction to an Isle of Man bank account was destined for a number of Northern political figures.

Mr McGuinness said last week he was not aware of a January 2014 letter to Nama from Mr Robinson’s principal private secretary, which was a copy of a “letter of intent” on the proposed management of the Northern Ireland portfolio.

The letter, according to Nama, appeared to summarise an agreement between Pimco, a company then interested in acquiring the portfolio, and the Northern Ireland Executive, which outlined details of a proposed memorandum of understanding.

The call log released by the Department of Finance said that, during the January 2014 conversation, Mr Robinson “reiterated the comfort provided by the commitments Pimco had made”.

The call log does not record any comments made by Mr McGuinness. The Deputy First Minister has said he was not privy to a litany of phonecalls and contacts in relation to the sale of the portfolio, some of which included Mr Noonan.

Both Nama and the chair of the Northern Ireland finance committee, Sinn Féin’s Daithí McKay, will on Thursday address the Dáil’s Public Accounts Committee on the sale controversy.