UPDATE – American academic, Peter Trumbore has a piece over on The Pensive Quill blog which has a member of the IMC implicitly admitting that the IRA had retained weaponry to counter threats from dissidents. This runs entirely counter to repeated assurances in the IMC’s reports.

He quotes from an interview he conducted with IMC member and former Alliance Party leader, John Alderdice in 2011 dealing with the issue of the dissident threat to the Provos. He quotes Alderdice thus:

And Trumbore adds his interpretation of that phrase ‘put them to bed’:

What Alderdice seemed to be arguing back in 2011 was that the PIRA retained enough military capability to defend itself were it to be challenged directly by the dissidents.

What could Alderdice mean by ‘put them to bed’ that has a sense other than ‘take them out’, ‘kill them’, ‘shoot them up’, etc, etc? And how do you do that, other than with guns?

The arrest today of Bobby Storey on suspicion of involvement in the killing in August of former IRA member Kevin McGuigan, serves to focus attention on the IRA’s Intelligence Department which Storey headed for so long and in which capacity the West Belfast activist earned an unrivaled reputation as a skilled operator.

His arrest seems to suggest that the PSNI suspect that the IRA’s intelligence-gathering wing may have played a role in the McGuigan murder.

One useful and revealing source of information on the Intelligence Department is the series of reports on paramilitary activity compiled by the Independent Monitoring Commission (IMC) during its seven years of existence, between 2004 and 2011.

Throughout the series of reports, the IMC’s attitude towards the IRA’s intelligence-gathering capacity amounted to one of benign tolerance – as long as the IRA did not gather information on British security force members and confined its activity to monitoring dissidents, informers, anti-social elements and drug-dealers, the IMC raised no objection and never once made the winding up of this activity a condition of its imprimatur, as it did with the IRA’s other functions.

Two questions thus arise: was the Intelligence Department involved in the IRA investigation of the ‘Jock’ Davison murder which in turn led to the killing of Kevin McGuigan? And what did the IMC think the IRA would do if its Intelligence Department uncovered information that suggested a threat existed to its members or leaders from armed opponents, such as dissidents or alienated former members?

The reports – twenty-seven of them in all – chronicle in some detail the run down of the Provisional IRA, especially after final decommissioning in September 2005. The key to the scale and integrity of the winding down of the IRA was, in the IMC’s view, the fate of the Army Council and the GHQ departments.

First an explanatory note to younger readers whose familiarity with IRA structures may be less than complete. At the top of the IRA sat the seven-man Army Council (and they were always men), selected by the  13-person IRA Executive which in turn was elected by an Army Convention, an IRA delegate conference where issues were debated and constitutional changes made.

The Chief of Staff was on the Army Council as of right and was one of the seven voting members. Two other senior figures, the Quarter-Master General (QMG), who was in charge of the IRA’s armaments and the Adjutant-General (AG), responsible for internal discipline and liaising with the grassroots, inter alia, also sat in on Army Council meetings but did not have a vote. So when the Army Council met, nine men were in the room (as well as a secretary, who was usually a woman) but only seven had a vote.

Although as military commander, the Chief of Staff had day-to-day control of the IRA, the Army Council could and did decide military policy and strategy.

The meetings were called to order and run by the Chairman of the Army Council who also represented the IRA in meetings with outsiders (like the British government) and in the final years of the campaign that position was filled by Martin McGuinness.

The Chief of Staff was the military commander of the IRA and he headed up something known as the GHQ, or General Headquarters Staff. The GHQ consisted of Departmental chiefs or Directors. Each Department on the GHQ had a specific function, such as intelligence, internal security, operations, training, engineering (explosives), finance, weapons procurement (quarter-master) and so on.

These departments were actually responsible for running the IRA and grassroots members’ immediate loyalty was often to the department they belonged to as much as, and even more than the region they operated in.

Without these departments the IRA would cease to exist as an army fighting the British. Accordingly the IMC’s chronicled the dismantling of the GHQ Departments as well as the Army Council and regarded these as the most compelling signs of an IRA that was withering away.

Incidentally, while the monitoring commission described the winding down of the Army Council, it had nothing to say about the IRA Executive, which technically has the power to revive the Army Council and thereby the GHQ as well. Since the IMC failed to record its dissolution, one is entitled to assume it still exists.

One department, though, was never dissolved. The Intelligence Department survived and did so with the unspoken approval of the IMC as long as its activities did not include gathering information on soldiers or policemen, what the IMC termed ‘terrorist’ intelligence-gathering.

The IMC may not have smiled on the intelligence department, but it certainly did not frown on it either, or ever seek its dissolution.

In as much as the Intelligence Department confined its spying and information gathering to dissidents, drug-dealers, criminals and political opponents of Sinn Fein and did not target the PSNI or the British Army, the IMC, it seems, was prepared to turn a blind eye.

Following the killing in Belfast last May of a senior IRA colleague, ‘Jock’ Davison, it would have been natural for the Intelligence Department to launch an investigation in an effort to discover who was responsible for the murder of their colleague and friend, whose violent death, if left unanswered, could encourage copy cat activity.

It is hard therefore not to conclude that the killing of Kevin McGuigan, whose alleged involvement in the murder of ‘Jock’ Davison put him into the category of ‘dissident’, at the least, may then have been facilitated by the Intelligence Department whose existence was tolerated by the Independent Monitoring Commission.

And, since the IMC knew that the IRA was monitoring and gathering intel on possibly violent opponents, what did it think the IRA would do if it felt it was under attack or the threat of attack from such quarters? Throw paper darts at them?

All of this serves to reinforce the suspicion that everyone – that is the British, the Irish, the Americans, SF’s partners in government – knew that unofficially the IRA needed to retain arms to counter threats from, allegedly, the likes of Kevin McGuigan.

Here are the relevant extracts from the IMC’s reports

1. October, 2005. Just a month after decommissioning its weapons the Intelligence Department was still functioning but with a new more political focus and targeting drug-dealers:

2. February, 2006. The Intelligence Department was still very active and was, with the approval and authorisation of the leadership, attempting to penetrate public institutions to obtain ‘sensitive information’. Although the intel gathering had a more political focus the Department targeted security force members, something that have the IMC cause for concern. It also targeted dissidents and drug-dealers:

3. April 2006. The Intelligence Department’s activity becomes more in line with the IRA’s commitment to end the armed struggle and the IMC concern evident in its February report abates. The intelligence gathering now focuses on political opponents and dissidents:

4. October 2006. The IMC declares that ‘terrorist’ intelligence gathering, i.e. focused on British security force members, has ceased and instead concentrates on information ‘that supports its political strategy’, loyalist paramilitaries, suspected informers and dissidents. The IMC also reports that the departments responsible for procurement of weapons, engineering and training have been stood down:

5. January 2007. The IMC reports that the IRA continues to gather information on suspected informer and dissidents but not for ‘paramilitary or other unlawful purposes’. There is no sign that the IMC is concerned at this:

6. May, 2008. The IMC believes the IRA is still gathering intelligence on dissidents, anti-social elements and suspected informers but not for ‘paramilitary activity’. i.e. attacks on security forces. Again the IMC does not judge this activity to be contrary to the IRA’s pledge to engage in only peaceful political activity:

7. September, 2008. In that month, the British and Irish government asked the IMC to devote an entire report to the IRA and specifically to answer the question: is the IRA committed to non-violence. The IMC’s conclusion was an emphatic yes. Senior IRA members had moved to political activity, while others had dropped out; it had abandoned and dissolved its ‘military’ departments, thus losing its ‘former terrorist capability’ and had ceased recruiting and training members. Most significant of all, the Army Council was no longer functioning (but nothing was said about the Executive) and the IMC concluded that this and ‘the standing down of the structures which engaged in the armed campaign’ was persuasive evidence that the armed campaign was over. But one structure was not dismantled and that was the IRA intelligence-gather ability and here the IMC became almost defensive of the IRA: ‘In so far as gathering information or  intelligence may continue in any limited way – not in itself improper if it does not involve illegal methods or intent – we believe that it is mainly for the purpose of ascertaining the nature of any threat from dissident republicans.’ 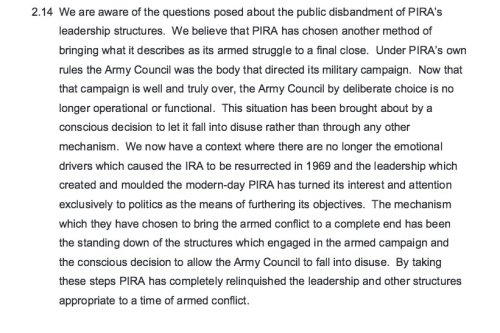 8. November 2009. This report carries the last ever mention of the IRA’s intelligence-gathering capability and again the line is clear: it was being done to discourage the movement of members to dissident groups and that was, it seems okay by the IMC.

This entry was posted in Uncategorized and tagged Intelligence Department. Bookmark the permalink.