The McGuigan Killing: Claims of ‘Unarmed IRA’ Are Ludicrous

Claims this week, first by former Irish Justice Minister Michael McDowell and now from former Taioseach, Bertie Ahern, that the British and Irish governments agreed to accept the continued existence of an unarmed IRA – “a withering husk” in McDowell’s words – to counter the threat from dissident republicans are so ludicrous they should be laughed out of the room.

Former Irish Justice Minister Michael McDowell – “a withering, unarmed husk” of an IRA would stave off the dissidents

If such an impotent entity ever came into being how long would it have taken the Real or Continuity IRA, or any one of the multitudes of republican acronyms that have sprung up since 1997, to work out that the Provos had become, in that wonderful Belfast phrase, ‘a beaten docket’ and could be quickly taken out and sent scattering? 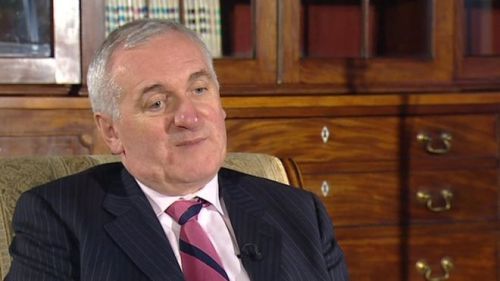 Former Taoiseach Bertie Ahern. Co-ordinated NI policy with McDowell and now claims that the IRA was to remain ‘unarmed’.

A few days, a couple of weeks, a month or two? I don’t know but it surely would not have been long before the dissidents gleefully realised their adversaries were weak and defenceless, as vulnerable as fish in a barrel.

The only way a rump Provisional IRA could see off a threat from the dissidents was to be at least as well armed, if not better armed. And both the British and Irish governments, and especially their security advisers, would have known that.

But neither government could afford to be found with their dicks in the honey pot, so to speak. And so, admitting the truth is not allowed.

So here is what I reckon may really have happened and we must base the alternative theory on the account provided by Mitchell Reiss, Bush’s peace process ambassador who is more credible and reliable than the other players if only because he had no dog in the fight, or if he did, that it was only a very small and insignificant one.

Here is what he wrote in his now famous review of Jonathan Powell’s book, ‘Great Hatred, Little Room’:

“In July 2005, the IRA had finally agreed to decommission all its weapons. At the last minute, [Gerry] Adams called No 10 to demand that some of the weapons not be destroyed so that the IRA could arm itself against possible attacks from dissident members. Unless this was allowed, he threatened, decommissioning would not proceed. The Blair government conceded, but wanted to check with Dublin. Irish Minister for Justice Michael McDowell refused to acquiesce in the backsliding, despite enormous pressure. Powell told Adams of the problem, and Adams gave way. Decommissioning took place as planned.”

What I suspect really happened was that when Blair’s proposed concession to Adams was discovered in Dublin the shit hit the fan in St Stephen’s Green, but for a reason altogether different from the one understood by Mitchell Reiss.

If Dublin had agreed to allow the IRA to remain armed it would have created the ingredients for a political scandal that would have overshadowed the Arms Trial imbroglio of 1970 which almost sent Charles Haughey to jail.

Not least of the consequences of making such a pact would be that Gerry Adams would have the Dublin government and a key adversary, Michael McDowell over a barrel.

A judicious leak at the right moment to the effect that an Irish government had permitted the IRA to keep weapons would destroy McDowell and his officials and the ensuing scandal would envelop another Fianna Fail Taoiseach, Bertie Ahern, and perhaps other members of the Cabinet. The threat to the very integrity of the state could not be understated.

No politician worth his salt would leave themselves open to such a vulnerability and while Mr McDowell has, understandably, now dressed his refusal to countenance an armed IRA in moral propriety, I suspect the truth may have been more complicated.

Which still left the problem of the Provos versus the dissidents unresolved. And that is why I would, if I had one, give a fortune to have been a fly on the wall when Jonathan Powell and Gerry Adams met to discuss what to do when McDowell said no.

Reiss says: “Adams gave way”. If so, why? Did he just throw up his hands in surrender? Did he accept the inevitability of casualties on his side, colleagues, comrades and friends gunned down by dissidents who did have weapons? And how did he justify such a meek surrender to his colleagues on the Army Council? Or was he made another offer that he couldn’t and wouldn’t refuse.

Here, I am wandering into the realm of pure speculation, I freely admit – and critics can attack me for that if they wish – but it is hypothesizing rooted in common sense.

What if Jonathan whispered the following, or something like it, into Gerry’s ear: “Listen, Gerry. Here’s the situation. We can’t be seen giving your people the green light to be armed. If it ever got out, Tony would be destroyed and Dublin just won’t wear it. But if your people were to, let’s say, acquire, or even hold back the necessary, I don’t think any of our people would make a fuss. How does that sound?”

Now, call it what you will, but to my ear and eye that would still amount to a government consenting to the continued existence of an armed IRA, with Dublin a conveniently silent but consenting partner. But there would be no fingerprints at the scene of the crime.

And if that, or something like it, is what really happened, is this why the Kevin McGuigan killing has spooked both governments and police forces and got their proverbial knickers in such a twist?

Is it possible that the truth is horribly simple: that both governments knew, not only that the IRA would continue to exist, but that it would also, by nod and wink, have to be allowed to retain weapons because otherwise it would be unable to deal with the dissidents? And that the greatest fear in Dublin & Belfast therefore is that this truth, of which they were aware, will be exposed?

In two reports published following the September 2005 supposed full act of decommissioning by the IRA – one in February 2006. the other in April 2006 – the Independent Monitoring Commission reported that not all the IRA’s weapons had been put out of commission.

That was immediately denied by the decommissioning supremo, General de Chastelain and a rift was opened up between the two main bodies responsible for monitoring the ceasefire.

In its next report, its 12th, published in October 2006, the IMC had an explanation for the un-decommissioned weapons which got everyone off the hook:

One response to “The McGuigan Killing: Claims of ‘Unarmed IRA’ Are Ludicrous”