In his often revealing, but just as frequently opaque report on the killing of Belfast lawyer, Pat Finucane, Sir Desmond de Silva devoted an entire chapter to what he called ‘Security Service Propaganda Initiatives’ in Northern Ireland.

Translated into ordinary language that reads: ‘MI5 Black Propaganda’. He drafted this chapter because Pat Finucane was a target of this black propaganda as were two other prominent Belfast solicitors, Oliver Kelly and PJ ‘Paddy’ McGrory.

Oliver Kelly, one of three lawyers targeted by UDA

All three lawyers have since passed away but they shared two other characteristics: they specialised in defending IRA and other republican clients and were well known for doing so, and at one time or another they were all targeted for death by the UDA.

Unfortunately, and frustratingly, de Silva does not spell out the exact nature of these ‘propaganda initiatives’ developed by MI5 but enough leaks have happened for us to identify at least one of them.

This was an eight-page take off of the weekly Sinn Fein-IRA paper, An Phoblacht-Republican News which the UDA dubbed ‘An Phobcrapt-Murderers News‘. It started to appear about Christmas time 1988 and was published on an erratic basis until after Pat Finucane’s assassination, i.e. for about a year or so.

At least that is what we think. The Linenhall Library’s Political Collection has archived the only available issues and there are about three that the library has been able to trace. Thanks to Alistair Graham at the Collection for digging them out.

We do know who the editor was, however. Sammy Duddy, a well known UDA figure originally from North Belfast, was given the job of putting ‘An Phobcrapt’ together and he combined that task with editing the UDA’s regular magazine ‘Ulster’.

Duddy was an interesting and possibly obvious choice as editor of ‘An Phobcrapt’. His last job for the UDA was as its chief intelligence officer until he was replaced by Brian Nelson who was a double agent working for the British Army’s Force Research Unit, an outfit whose role in the killing of Pat Finucane (not to mention the handling of Freddie Scappaticci) is a matter of such controversy.

In an hour-long tape-recording passed on to this writer, Tommy Lyttle, the UDA’s West Belfast Brigadier and briefly Andy Tyrie’s successor as overall head of the UDA, said he believed Duddy was an informer. Duddy died in October, 2007. Tommy Lyttle died in 1995 from a massive heart attack, not from the assassin’s bullet that he feared.

Tommy Lyttle appears to have been on the button. ‘An Phobcrapt’ was, according to sources I have spoken to, an MI5 operation whose purpose, inter alia, was, according to de Silva, to disrupt and unnerve IRA activists by passing their details on to the UDA for publication and to assist in the recruitment as agents, IRA members who had been resistant to MI5’s approaches:

….propaganda against specific PIRA figures was a tactic that could be used against individuals who were either assessed to be unrecruitable as agents or who had been approached and had refused to become agents.

De Silva claims that, of course, there never was an intention on the part of MI5 to pass on intelligence to the UDA that could be used to attack or kill republican targets but such a claim defies common sense. Once you give a Loyalist paramilitary group details about an IRA suspect, you must expect that they will then try to kill that person. It is what they do.

Indeed one of the issues of ‘An Phobcrapt’ carried the photo of Pat Finucane leaving court with a client, the late Pat McGeown, which Brian Nelson then passed on to his killers so they could identify the person they wanted to assassinate, i.e. Pat Finucane.

So in that episode almost the full gamut of collusion is evident. MI5 give their agent Sammy Duddy a photo of Pat Finucane – called ‘Pat O’Cocaine’ in ‘An Phobcrapt’ – to publish in his black propaganda sheet and the photo is passed on to the lawyer’s killers by a man working for British military intelligence. The circle is complete.

(‘An Phobcrapt’ is peppered with other photos of republican activists, details of their lives are given and, in the case of lawyers who MI5 would have known were on the UDA’s hitlist, their home addresses are published for all of Loyalism to see. In the case of Pat Finucane, he was, of course, shot dead in his home. How could de Silva absolve MI5 of any responsibilty for his killing in the light of this?)

The rest of this blog post is devoted to reproducing the available issues of ‘An Phobcrapt’ so readers can see for themselves what MI5 and the UDA were up to. The sections are divided into Pre-Pat Finucane Killing and Post-Pat Finucane Killing. Following that are the relevant extracts from the de Silva report with explanatory notes by myself prepared for RTE. 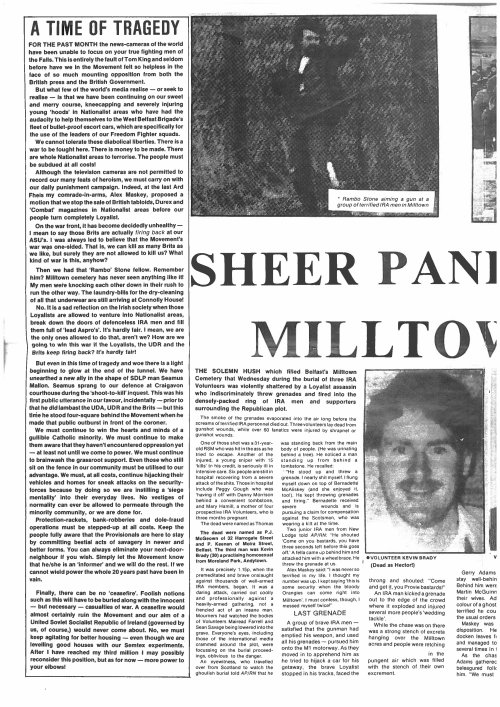 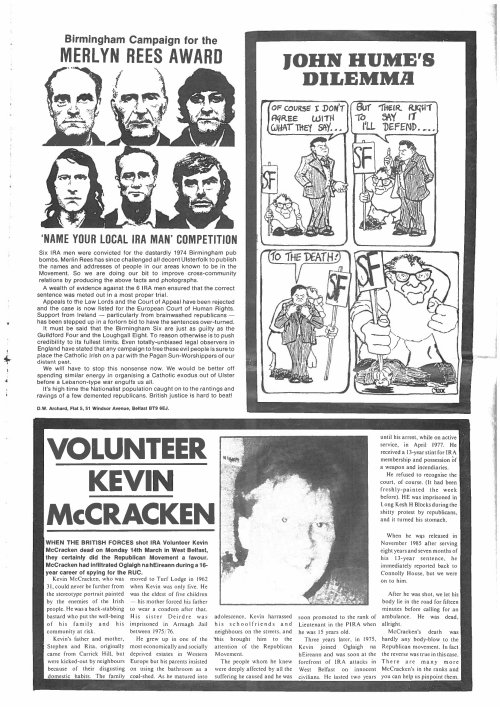 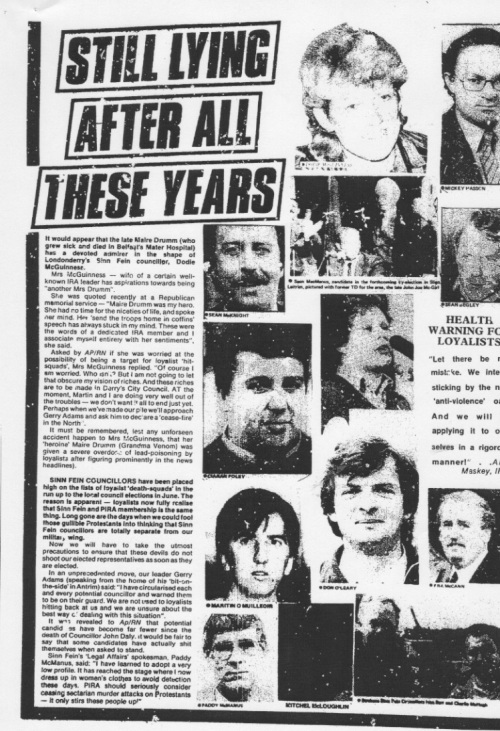 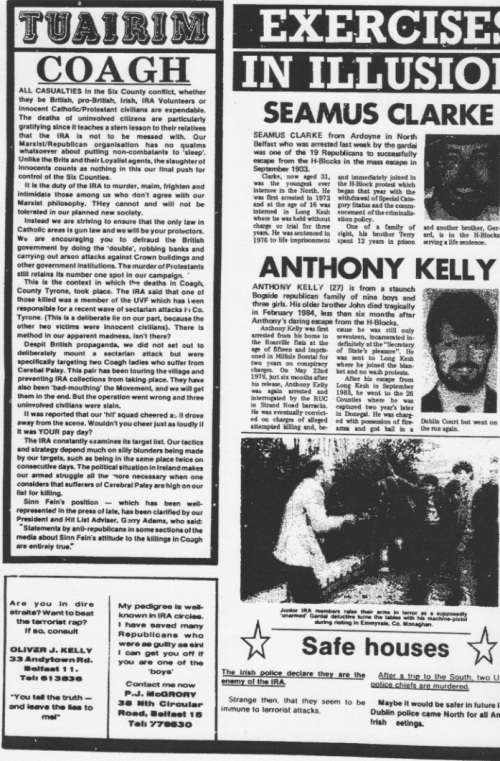 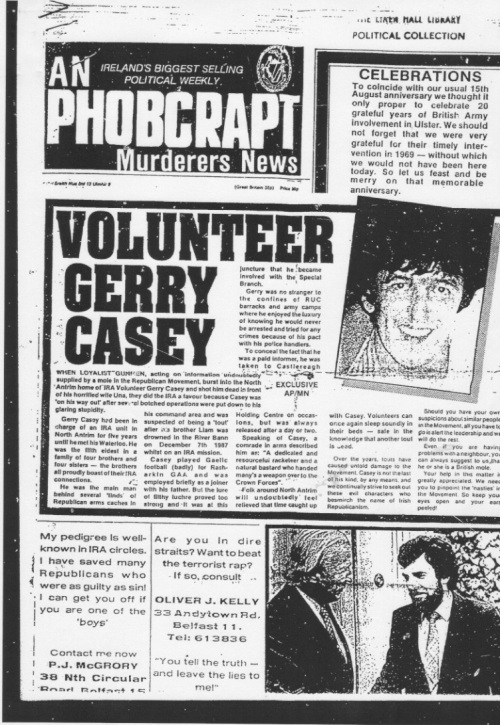 De Silva on MI5, UDA and ‘An Phobcrapt’ initiative. De Silva’s comments are highlighted in yellow. All else are my notes:

One response to “‘An Phobcrapt’ – The MI5/UDA Black Propaganda Sheet”