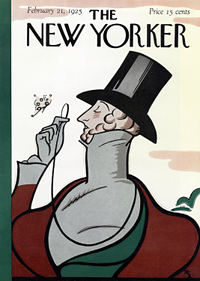 Yesterday (Monday 16th March) was the official publication date of The New Yorker issue that carries the 15,000 word exposé of Gerry Adams’ alleged part in the IRA disappearance of Jean McConville and the 1973 IRA bombing of London.

To readers of this blog especially in Ireland who may be unaware of The New Yorker’s place in the world, a word or two in explanation: The New Yorker is undoubtedly America’s premier weekly magazine with a subscription exceeding one million readers and a hard-earned reputation for credible, investigative long-form journalism, excellent reviews, cartoons and new fiction. Its subscribers include the nation’s decision-makers, movers and shakers, the most important members of American society.

You can be sure, for instance, that a copy of this week’s edition of the magazine will be on the desk of Barack Obama, Hillary Clinton, John Boehner, most US Senators, US Supreme Court judges and a majority of the higher echelon of Washington’s bureacracy and security leadership.

And this week America’s best & brightest will have read these words written by the author of “Where The Bodies Are Buried”, Patrick Redden Keefe about interviews given by Brendan Hughes and Dolours Price concerning Gerry Adams’ alleged involvement in the disappearance of Jean McConville:

Nevertheless, it’s hard to explain away the very specific, and similar, recollections that Hughes and Price shared about Jean McConville’s murder. When the journalist Darragh MacIntyre pressed Adams about McConville in a 2013 BBC documentary, “The Disappeared,” Adams, looking like a cornered animal, flashed a hostile grin and noted that Hughes and Price had “demons.”

Keefe’s 15,000 word article also demolishes Adams’ claim never to have had any connections with the IRA:

Several former I.R.A. volunteers confirmed to me that Adams was a member of the group, and a photograph taken at a Belfast funeral in 1970 captures him wearing the black beret that was an unofficial uniform of the organization.

And his article definitively links Adams to the planning of the 1973 bombing of London, the first attack by the Provisional IRA on the British capital:

According to both Dolours Price and Hughes, the meeting (to choose members of the bombing team) was run by Gerry Adams. Generally, the I.R.A. issued warnings before its bomb blasts, in order to minimize civilian casualties. But sometimes these warnings did not allow sufficient time for escape: in July, 1972, twenty bombs were detonated in a single day in Belfast, killing nine people, an episode that became known as Bloody Friday

“This could be a hanging job,” Adams told the group, explaining that if the perpetrators were caught they could be executed for treason. “If anyone doesn’t want to go, they should up and leave now.”

Were comments such as these to be made by an Irish journalist, Sinn Fein spokespeople would be queuing up to condemn the reporter’s motives, insinuating the existence of a hostile political or personal agenda while other journalists would be sharpening their knives to perform a similar exercise in their various columns.
This is exactly what happened last May in the wake of Gerry Adams’ arrest by the PSNI on matters not a million miles away from the subject matter of Mr Keefe’s impressive article. Leading the field in this type of onslaught back then were The Irish Times, The Irish News and the publications, online and print, produced from Niall O’Dowd’s stable.
So far The Irish Times has given the article two mentions but neither The Irish News nor Niall O’Dowd’s organs have given Mr Keefe’s work any mention at all – at least that I can find. Neither of those two publications has even mentioned the existence of The New Yorker article even though it has been available online for more than a week and has been the talk in journalistic and political circles in Ireland, Britain and America.
What we are witnessing is to be sure an embarrassed silence – embarrassed because Mr Keefe can hardly be accused of being a dissident republican, so better to say nothing. But it is more than that.It is depressing evidence of the success Sinn Fein has enjoyed in intimidating sections of the Irish media from discussing issues they should be discussing, especially since those doing the intimidation are doing so on behalf of people who are very likely to be members of the next government in Dublin (as well as Belfast).

The fact that The Irish Times has at least acknowledged Patrick Keefe’s journalism is to be welcomed; but such a pity that it took an outsider to open up issues that should have been the focus of that paper’s investigative resources long before this. The question that The Irish Times should be asking itself is this: ‘Why The New Yorker and not us?’

Issues such as the disappearing of widowed mothers, the deaths of six hunger strikers or a host of other dubious events in the IRA’s more recent history that defy or challenge normal explanation are unfortunately now regarded by too many in the Irish media as off-limits since to regard them any other way risks being branded as anti-peace process. And the treatment meted out to those who have tried to tell the truth about such issues, or even to explore them, serves as a chilling example of what could happen to them.
It is also the reason why the Irish media now expends so much more energy pursuing the various sex scandals in which Sinn Fein and the IRA have become embroiled. To be brutally blunt, it is safer. No-one can accuse you of being anti-peace process if you are fighting to expose the cover up of a pedophile rape. After all the Catholic Church went through the same examination and that wasn’t at all politically motivated – at least not obviously so.

In saying this I do not wish in any way to understate the gravity of rape, especially underage rape, nor the arguably more heinous offence of covering up and lying about it. Nor do I question in any way the validity of the media’s pursuit of those responsible for the coverup’s, nor the worthiness of their journalism.

But no-one died as a result of those scandals, at least that we know of. This is not an argument not to pursue SF/IRA rape cover-ups’, just to broaden the field of investigation. Like Patrick Keefe and The New Yorker just did. Over to you, Irish media (Niall O’Dowd excepted).