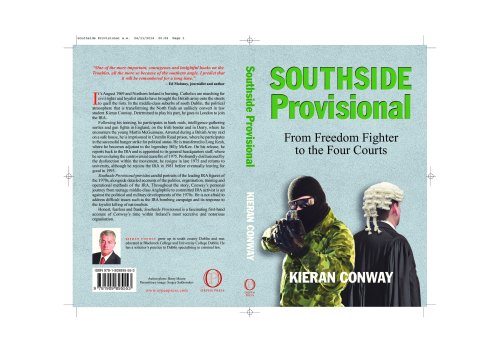 Kieran Conway is that most unlikely of IRA activists. Reared in affluent Killiney and educated at prestigious Blackrock College, he was the epitome of a Dublin Four, middle-class anglophile, headed for a career in the law and a conventional, comfortable life amid the detached splendour and manicured lawns of Southside Dublin.

If his life had worked out as his parents hoped, the most exciting event of his life each year would have been the Ireland v. England rugby international at Lansdowne Road.

Except in 1970, his life took a completely different course. The late 1960’s were the years that radical, left-wing student politics swept across Europe and the US and it was no different in Dublin, especially at UCD where Conway was briefly a student.

In the US and elsewhere in Europe it was the Vietnam war which was the catalyst but in Ireland the North was a fiery spark and Kieran Conway’s life was changed. And so in 1970 he decided that he wanted to join the IRA, any IRA. Rebuffed by both the Officials and Provisionals in Ireland he learned that it was easier to join up in England and so he set off for London and by that backdoor route began one of the most unusual and intriguing stories of life in the Provisional IRA.

Conway had two spells in the IRA, from 1970 to 1975 and from 1981 to 1993, when finally, disillusioned with the direction the IRA was taking, he drifted away, the cord not so much cut as frayed away. His career in the Provos took him to the IRA’s GHQ Staff as Director of Intelligence via a spell on active service in Derry at a time when Martin McGuinness was a rising military star, and some jail time in Long Kesh, imprisoned on an arms charge.

Kieran Conway finally made it to the law, was briefly a barrister and now runs a solicitor’s practice in Dublin. A couple of years ago he sat down to write the story of his life as an IRA activist. (Disclosure: I was happy on a couple of occasions to give him some advice.)

The result, ‘Southside Provisional – From Freedom Fighter to the Four Courts’, will be published next Wednesday, Nov 19th by Orpen Press and his book deserves to take its place among the better first-hand accounts by an IRA activist in this or past campaigns.

It is certainly head and shoulders above the few experiental expositions of the Provisional IRA that have seen daylight thus far. One or two of those accounts are notable for their dishonesty whereas what shines out from Kieran Conway’s story is a refreshing and much needed candour that reveals but not recklessly so.

Time will tell whether Kieran Conway’ decision to tell his story has a wider impact, persuading others to follow his example. One thing is for sure: up to now activists’ accounts have been characterised by dissembling, obfuscation, sleight of hand, too much hiding of the truth. Those who would like to change that do not have time on their side.

It is time to write the true story of the IRA; otherwise the lies will survive to prevail. Kieran Conway has made a valuable start.