Kincora Scandal: MI5 Agent Was Named In UK Parliament 24 Years Ago; RUC Was Implicated In Cover-Up. Any Chance Of A Subpoena?

The disclosure this week on BBC Northern Ireland from former British Army intelligence officer, Brian Gemmell that the British spy agency, MI5 had in 1975 ordered him to halt a probe into a paedophile ring at the Kincora Boys Home in East Belfast has re-opened this decades long scandal and re-fueled demands for a thorough investigation of the role of British security agencies in covering up the abuse of young boys at the home.

With the latest allegation from Gemmell, who was a Captain in British military intelligence, MI5 stands accused of complicity in the sexual, physical and mental abuse of an unknown number of children, many of whom were from broken or difficult homes or were orphans. An ordinary citizen accused of such an offence could expect the full weight of the law to bear down upon them but MI5 is likely to try to hide behind its intelligence privileges to evade investigation.

According to Gemmell, who was not answering his phone at his Yorkshire home yesterday, he was summoned to see the MI5 officer and told to end his investigation, based on information he had received from two informers, one of them codenamed ‘Royal Flush’ who was named in the British Parliament in 1990 as Roy Garland, then a disciple of Kincora Housefather, William McGrath. McGrath, an evangelist who headed his own Orange Lodge, created the bizarre Loyalist group, Tara, a ‘doomsday’ outfit from which the post-Gusty Spence UVF evolved. Garland, a columnist with the Irish News, experienced brief notoriety when the Kincora scandal broke when to hide his identity the Irish Times christened him ‘Mr X’, a source who implicated Ian Paisley in the cover up.

McGrath’s links to the extreme edges of Loyalism and to its mainstream were impressive and many Unionist politicians of the 1960’s to the 1980’s had been part of his entourage. His associates included Ian Paisley as well as leading figures in both the DUP and the Official now Ulster Unionist Party. Alongside his paramilitary associations, all this would have made McGrath  an obvious target for British intelligence while his pedophilia and strange sexual behaviour – he was suspected by one associate of having had intercourse with a corpse at one point – would have given British intelligence ample leverage against him.

This is what Brian Gemmell told the BBC about his meeting with the MI5 man: “I went up thinking he was going to be pleased with me (but) he bawled me out He was rude and offensive and hostile. He told me not just to stop any investigation into Kincora, but to drop Royal Flush.”

However he gave a much fuller and more colorful account to the British Labour MP and former London mayor Ken Livingstone who said this about his encounter with Gemmell, whom he did not name but called “James”. Gemmell had passed on intelligence about Kincora after meeting Roy Garland to his military superiors:

The Army intelligence officer wrote a report of his meeting with Garland, and sent it to his Army superiors as a matter of routine. He said that it was then passed to MI5—which shared the same building at Army headquarters—and that he was summoned to see the senior MI5 officer. On the “Public Eye” programme, he said of that meeting: I can’t honestly say that I was expecting three gold stars but I went up feeling pretty positive, expecting a normal meeting. Instead I got blown out of his office. He’s rude to me, he tells me that the kind of information that I have submitted is not proper intelligence, that we have nothing—we, as intelligence officers, don’t dabble in homosexual affairs, that these moral matters are nothing to do with us. He vilifies my report, he tells me to cut off the contact. I can remember him saying to me words to the effect ‘get rid of him, break the contact, just get rid’. I’m surprised because we had had a pretty good relationship going up until then. He blows me out of the office. That, surely, is a remarkable position for one of the most senior MI5 officers on operational duty in the north of Ireland: having been told of systematic child abuse by a leading militant Protestant paramilitary, MI5 decided to do nothing about it.

The name of the MI5 officer has been known for nearly a quarter century and he was named in the British House of Commons in June 1990 by Labour MP’s Tam Dalyell and Ken Livingstone as Ian Cameron, MI5’s military liaison officer in Northern Ireland. The striking aspect of Livingstone’s account of Brian Gemmell’s story is Cameron’s given reason for insisting that he drop his probe, not that it would endanger an ongoing intelligence operation but that matters such as pedophilia were of no concern to MI5 – in a home run by one of the North’s most extreme and well connected Loyalists? Striking since the involvement of NIO officials in the ring was alleged to this reporter by a source who investigated the home in the 1970’s. 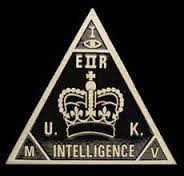 Britain’s internal spy agency, MI5 covered up and thereby facilitated the rape of children at a home in East Belfast during the 1970’s.

Powerbase claims that Cameron held a senior position in British intelligence in Berlin in the early 1970’s but was then transferred to Northern Ireland where from 1974 onwards he served as intelligence controller at Thiepval barracks, the British Army HQ and was involved in the power struggle for intelligence supremacy in Northern Ireland with MI6, a battle won by MI5.

An intriguing side effect of Gemmell’s disclosure is that it is helping to bestow a new credibility on whistle-blowing former security personnel such as Colin Wallace and Fred Holroyd, figures that the British establishment, aided by not a few in the media, were keen to discredit.

Tam Dalyell’s contribution to that 1990 House of Commons debate is below but what is starkly clear from his and Ken Livngstone’s contribution is that the salient details of MI5’s role in the Kincora cover up were well known nearly twenty-five years ago but nothing was done. 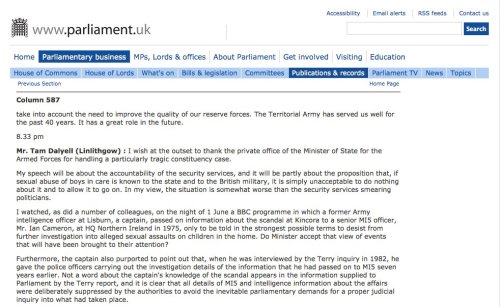 (A note about language. Throughout those 1981/82 Irish Times reports all the journalists involved referred to the scandal as being a “homosexual” one whereas the correct term would and should have been “pedophile”, since we were implying that all homosexuals were or could be pedophiles when that was palpably not true. Put that down to the times that were in it and our own immature attitudes. It wouldn’t happen now, that’s for sure.)

The three members of staff at Kincora appear in court on December 10th, 1981 charged with offences connected to sexual assault of boys. Only one, William McGrath pleaded not guilty and was ready to argue that he had been framed by the UVF with whose leaders he had fallen out. He later changed his plea to guilty apparently because of family fears of what courts disclosures would reveal. 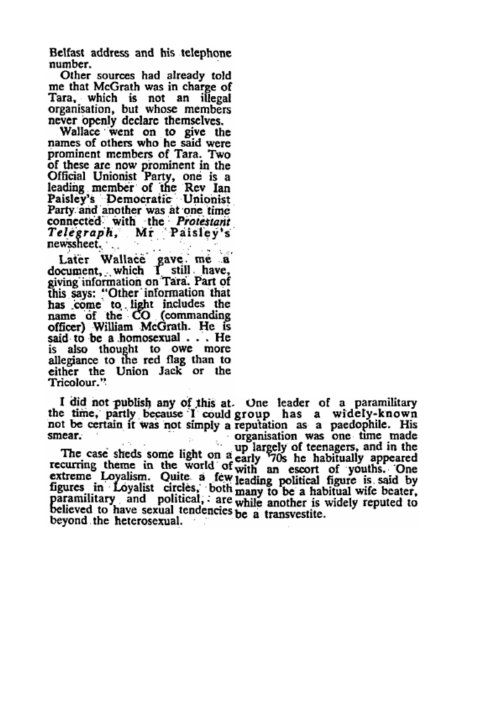 Irish Times – December 17th, 1981; McKittrick’s report reveals that the British Army knew all about Kincora Housefather, William McGrath and that he was of intelligence interest to the military. 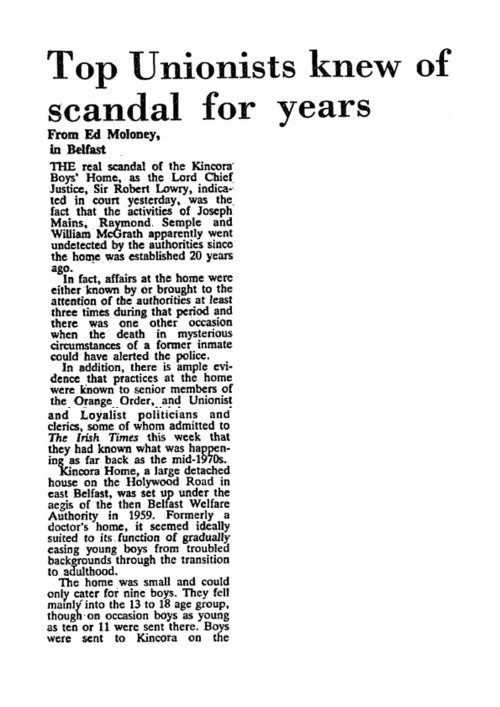 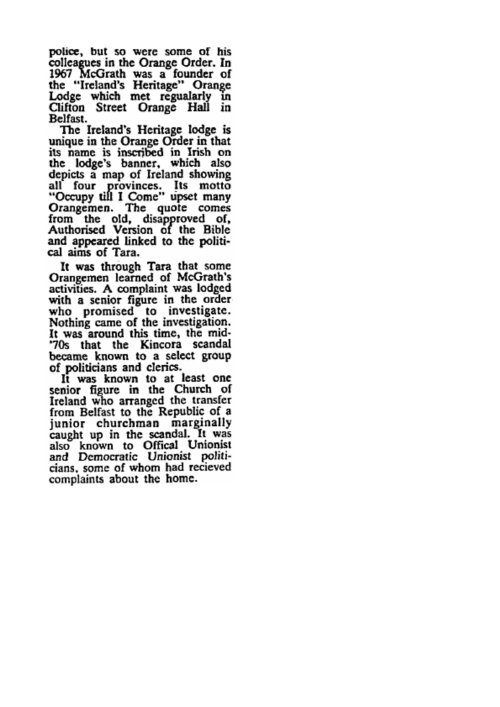 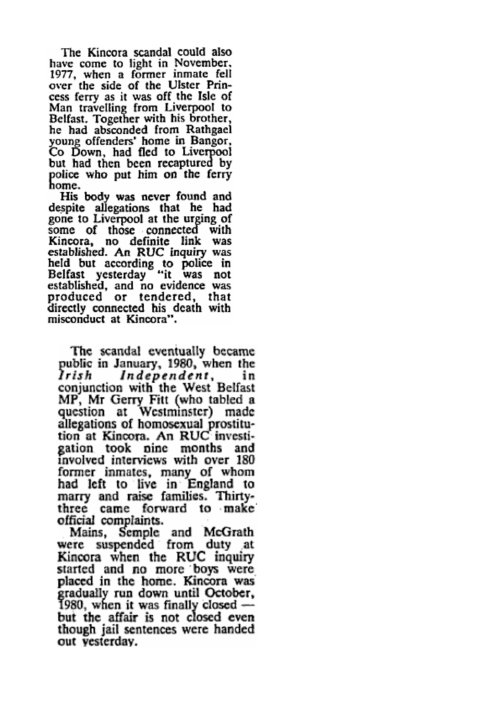 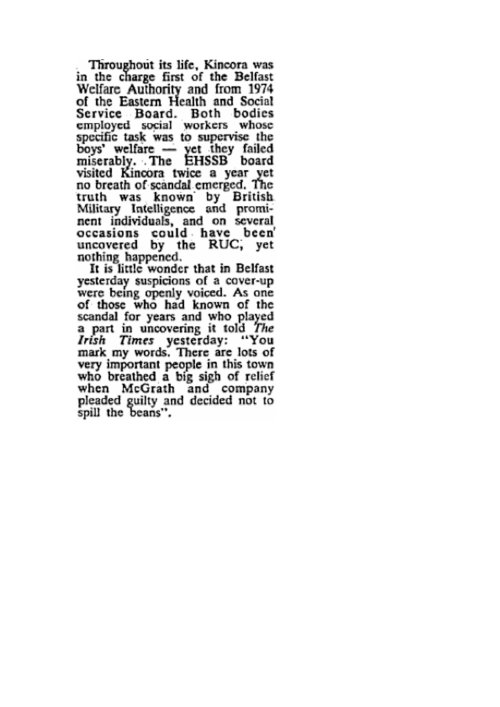 And the Unionist establishment knew. After all WIlliam McGrath was one of their own. Irish Times, December 17th, 1981 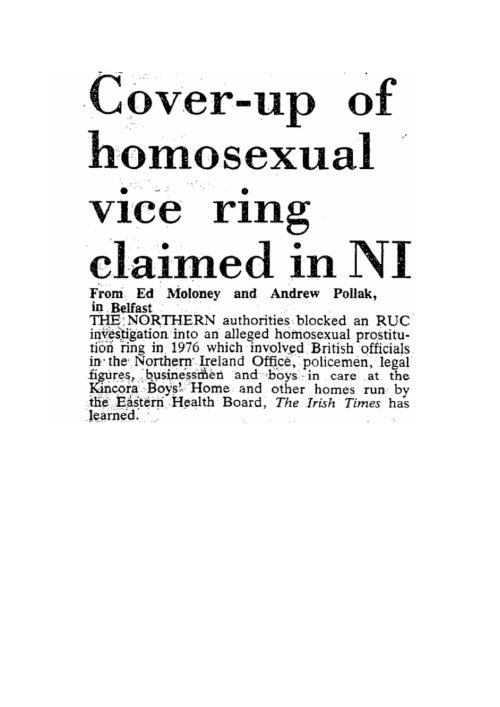 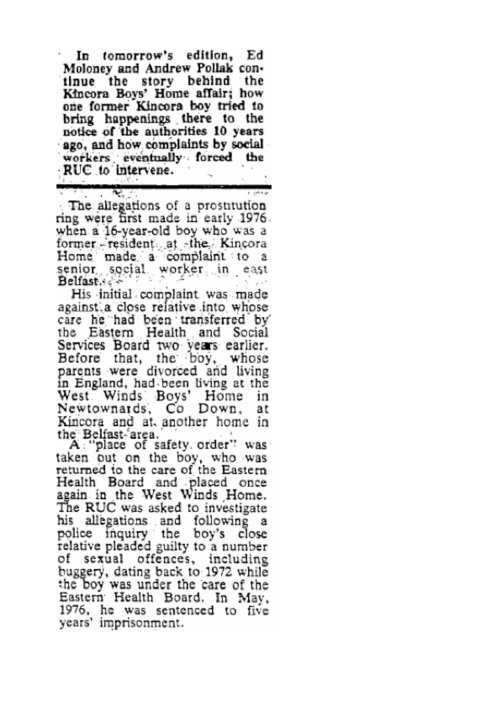 And so did the RUC, which covered up its own officers’ probe into the affair – Irish Times, January 12th, 1982. So what is the PSNI going to do now? The force’s commitment to uncovering historical crime is on record and it would be hard to imagine a more bestial crime than covering up the rape of children. So a criminal investigation, not a public inquiry is called for in the wake of Brian Gemmell’s allegations. Here’s a good starting point PSNI: reach down into the drawer marked ‘blank subpoena forms’, fill one out and send it off to the head of MI5 asking for him to trawl through his records of that time for evidence of a cover up and hand it all over. After all everyone else has to.

11 responses to “Kincora Scandal: MI5 Agent Was Named In UK Parliament 24 Years Ago; RUC Was Implicated In Cover-Up. Any Chance Of A Subpoena?”