Fr. Alec Reid – An Alternative View Of The Clonard Priest

The last posting of 2013 on thebrokenelbow.com is given over to Catherine McCartney, whose brother Robert was brutally murdered by the IRA in January 2005 and who gives her own assessment of the Redemptorist priest, Fr Alec Reid who died last November. His passing was accompanied by a largely uncritical media and political acclamation of his role as the priest of peace, the intermediary whose secret diplomacy helped Gerry Adams bring the IRA’s war to an end.

Catherine has a somewhat more jaundiced view of Alec Reid, one fashioned by the cleric’s extraordinary intervention in the wake of the vicious beating of Geoff Commander, a family friend and campaigner for the truth about her brother’s death, an intervention made on behalf of those who had administered the beating not the victim.

As this posting appears, the former US diplomat Richard Haass is in the final stages of negotiating an agreement with Northern Ireland’s politicians that will propose a way of dealing with the past, specifically designed to establish the truth of who did what to whom and why during the Troubles. We shall see if the agreed process, assuming there is one, is capable of telling the truth about Robert McCartney’s death. 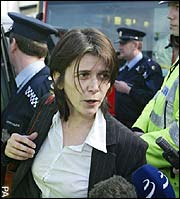 Catherine McCartney, pictured at the time of her brother’s death

The death of Alec Reid has brought with it the usual outpourings of inflated eulogies and unexamined claims about the life of the Redemptorist priest. Media, politicians, church and the Catholic faithful lined up to pay homage to the humanity of this great man while the presence of unionist politicians at his funeral was hailed as illustrative of the fruition of his peace work.

I hadn’t heard of Alec Reid before 2005 and news of his death evoked a different emotion in me. In January of that year my brother Robert was murdered by the IRA outside a Belfast bar, stabbed to death in the most cowardly way and the killing covered up using the full resources of the IRA and its leadership. Ordinarily the murder of a man such as Robert, a working class Catholic from a republican ghetto – Short Strand, the smallest and most vulnerable Catholic area in Belfast – who was killed by his own, would have warranted little attention. However various factors combined to make the fall out a little more extraordinary.

First, was the reaction of my family. We went public, naming the IRA as responsible and demanding his killers be brought to justice – as did the community. For them Robert’s murder could not be placed within an ‘excusable context’ i.e. punishment beating for drug dealing or some other charge, an attitude that indicated that people in Short Strand were fed up with the IRA’s thuggish treatment of them.

Second, his murder came on the heels of the Northern Bank robbery in December 2004 just before Robert’s murder. The cockiness of the IRA at a time when it was supposed to be moving towards decommissioning its weaponry, was a result of the destructive approach that both the British and Irish governments had adopted to IRA criminality for the previous decade. Both London and Dublin had decided to ‘turn a blind eye’ to IRA excesses on the grounds that the Provo leadership needed to reassure its grassroots that no sellout was planned; every now and then a robbery or a killing served to give that reassurance and both governments were complicit in the deceit.

But the robbery put the brakes on the infamous ‘peace process train’ and many commentators concluded that it could be years before there was any further movement. The fall out from Robert’s murder presented an opportunity to the establishment to start the train up again.

As a result the IRA/Sinn Fein came under pressure from the political establishment and our campaign was an instrumental cause of this. They, that is the Provisional leadership, viewed Robert‘s murder as an inconvenience and they were damned if they were going to allow it to lessen any leverage they held within the process.

The IRA leadership’s core objectives were: protecting the murderers, shutting the family up and maintaining control of the community.

Between January and October of that year we received three death threats, there were bomb warnings, and pickets were placed outside the house; eventually we had to move out of Short Strand where we had been born and bred. Essentially it was us against the might of the IRA.

The climax to the intimidation came in September. The community remained angry at Robert’s murder and this spilled over into an altercation with local IRA thugs. This signaled a loosening of the IRA’s grip. To bring the community back into line and steady the ‘green jackboot’ on the necks of the people Geoff Commander, a friend of Robert’s, was brutally attacked by up to eight men as he walked home alone one night.

Geoff refused to be bowed and reported the thugs to the police and charges were brought. Various interventions were made by groups and individuals on behalf of the IRA e.g. Community Restorative Justice (this organisation was closely affiliated to the Provos) to dissuade Geoff from proceeding with the case.

These overtures failed and Geoff and his wife Sinead remained steadfast in their determination to get justice. It was into this very intimidating and volatile situation that Fr. Alec Reid stepped. It would be natural to assume that given the circumstances this intervention would have been of a pastoral nature. Being devout Catholics both would have welcomed the support of a priest. But they were to be disappointed.

Alec Reid rang the Commander household and spoke with Sinead. He asked her to persuade Geoff to drop the charges against those charged. He didn’t give any specific reason as to why the men should not face justice; the fate of the peace process didn’t depend on it, the interest of ‘peace’ would not be served by it, the ‘greater good’ was not at stake.

There was no discernible reason given as to why Geoff should allow his brutal attackers escape justice, and not only that but allow the IRA to retain its grip on the community by increasing people’s fear of the consequences of reporting its crimes to the police. Alec Reid didn’t ask after the family. Sinead was flabbergasted at his request and told him: ‘Father my husband could have come home to me in a box, just like Robert McCartney’. He merely muffled acknowledgement of this but repeated his request for consideration of the matter.

This was how I came to know of Alec Reid. Alec Reid chose to stand with those responsible for the murder of an innocent man, the attackers of Geoff and the IRA in the intimidation and isolation of my family. By intervening on behalf of the IRA to have assault charges against Geoff’s IRA attackers dropped, Alec Reid intervened against the vulnerable, against right and against justice.

When I am asked what I think of Alec Reid my simple response is, ‘Provie priest’. In Belfast everyone knows what that means.

21 responses to “Fr. Alec Reid – An Alternative View Of The Clonard Priest”