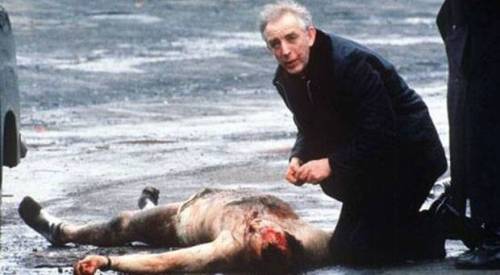 Fr. Alec Reid – this iconic photo shows bloodstains on his face which were from his attempts to give mouth-to-mouth resuscitation to a dying British soldier

The Tipperary-born Redemptorist priest, Fr Alec Reid, who died today, will always be remembered for two things. One was his role in the peace process as the secret envoy, from as early as 1982, for SF leader Gerry Adams as he reached out to the Irish and British governments with proposals for an end to the IRA’s war and Sinn Fein’s entry into constitutional politics. That all culminated, as history records, in the Good Friday Agreement (GFA) of 1998.

The other was his part in one of the most extraordinarily violent few days of the Troubles, which began with the SAS execution of three IRA would-be bombers in Gibraltar on March 6th, 1988, was followed by Loyalist freelance gunman, Michael Stone’s pistol and grenade attack on mourners at their funerals ten days later and then the deaths a couple of days after that, at the hands of a mob, of two British corporals who had accidentally strayed into the path of the funeral of one of Stone’s victims.

Driving into the funeral crowd in a civilian car, the pair were evidently mistaken for Loyalist extremists. They were dragged out of the vehicle, bundled into a nearby sports ground where they were searched, stripped and beaten and then driven by black taxi to waste ground where a single gunman shot them dead.

I once watched the British Army’s ‘heli-teli’ footage of the incident, shot from a helicopter overhead, and it was the one of most riveting and disturbing pieces of film I ever saw. What sticks in my mind is the way the crowd surrounding the soldiers’ car behaved as a single organism, swaying backwards and forwards almost like a flower opening and closing, or a wave crashing against rocks and ebbing away, when one of the soldiers produced a pistol and brandished it out of the driver’s window. 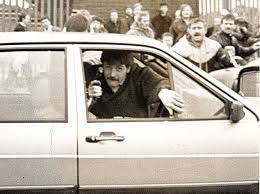 When the soldier produced his pistol, the crowd swayed back and forth like a single organism.

Fr Reid was there that day and there is a photograph of him, which I can’t immediately locate, of him deep in conversation with Gerry Adams and Martin McGuinness as they followed the cortege.

When the crowd abducted the two corporals and threw them over a gate into the sports ground, he followed them and by all accounts pleaded for the soldiers’ lives. When the pair were taken away by black taxi he followed and attempted to resuscitate them after they had been shot.

There was a massive RUC investigation afterwards which centred on identifying those who had surrounded the soldiers’ car and had carried them away to their deaths. Provo stewards confiscated dozens of film rolls from press photographers to make the police’s job harder and I remember watching Sinn Fein officials emptying bags of them inside the party’s press centre not long afterwards.

The police were able nonetheless to identify a large number of participants from surviving media photos and brought prosecutions but their search for witnesses who might have been able to further help their inquiries was less successful.

One man who had a ringside seat, as it were, was Fr Reid, who was on a first name basis with many of the Provos at the funeral, not least some of those who helped kill the corporals. I don’t know if he knew the identity of the gunman who pulled the trigger (who was a very senior Belfast IRA figure) but if he didn’t, he knew most of those who had delivered the soldiers to death at his hands.

The RUC wanted to question him but they never did. The reason why I can now tell, given that Fr Reid is no longer with us and the promise I gave more than a decade ago to keep silent no longer holds.

The story gives a remarkable insight into what was supposedly a highly secret and barely developed process and it suggests that the journey to the GFA was way more advanced at that early point (six years before the first IRA ceasefire) than anyone would dare admit.

Knowing that the police would want to question him and that he if told the truth and identified the soldiers’ assailants his usefulness as an intermediary for Gerry Adams and the Provo peace camp would end, Reid approached a senior official in the Northern Ireland Office to explain his problem.

The NIO was well aware of the IRA’s slow journey towards constitutionalism by this point. Fr Reid had already been in touch with Tom King, the then NI Secretary to explain the process and to win his support for it while the most senior officials at the NIO had been assigned to work on it (similar advances had been made to Charles Haughey in Dublin and 1988 also saw Sinn Fein and the SDLP meet followed by the so-called Hume-Adams talks, encounters that were designed to disguise Haughey’s role in the process).

The peace process was actually very well advanced and everyone seemed to know it except the general public – and of course the Provo grassroots.

So, Reid explained his difficulty to the man at the NIO and soon contact was made with the RUC Chief Constable, Sir John Hermon and the order was quietly passed down: on no account should detectives investigating the corporals’ killings bring Fr Alec Reid in for questioning.

People who were involved in those two deaths – murders in the eyes of the State – escaped prosecution thanks to the NIO/RUC decision to put the infant peace process ahead of the needs of criminal justice.

It is worth bearing this in mind when judging the sanctimonious cant about victims’ needs for justice that has flowed in the wake of John Larkin’s remarks this week that there should be a halt to all pre-1998 prosecutions for the sake of a peace process that these days looks far from healthy.

4 responses to “Fr. Alec Reid & The Two Corporals: The Day The RUC Turned A Blind Eye”