The Force Research Unit – How It Began

By Ed Moloney and Bob Mitchell

In the wake of the de Silva report on the Pat Finucane assassination there has been a renewed interest, at least on the part of obsessives like ourselves, in the origins of British military intelligence operations in Northern Ireland. By coincidence BBC Panorama also has a documentary in the pipeline, postponed recently for some unexplained reason, on the Military Reaction Force (MRF), the prototype intelligence group established by the British Army’s counter insurgency guru, General Sir Frank Kitson. This fascinating period in the Troubles is being revisited on several fronts and deservedly so.

Some interesting light was shed on this early period in the development of military intelligence units and operations by a document released under the 30 year rule back in 2005. It is a Northern Ireland Office briefing paper prepared for a meeting in April 1974 between British prime minister Harold Wilson and his Irish counterpart, Garret Fitzgerald and it explains in some detail the origins of the MRF and its replacement by a much larger, better trained outfit called the Special Reconnaissance Unit. The SRU had the task of putting terrorist suspects under covert surveillance as well as recruiting and running informers. Former SAS soldiers served with the SRU which liaised closely with the RUC Special Branch. (Incidentally the existence of the MRF and SRU in close sequence probably explains the perennial confusion about the real meaning of MRF, was it the Military Reaction or Reconnaissance Force?)

The briefing paper – aptly called ‘Defensive Brief D’ – appears to have been motivated by concern in Irish government circles that the SAS was now serving in Northern Ireland. A recent report in the Times by Robert Fisk had claimed the regiment had been deployed on the streets. Since the SAS was, even then, associated with a shoot first, ask questions later type of approach to military operations, the Irish government was worried that SAS deployment could intensify Nationalist hostility towards the British Army. The briefing paper claimed that one SAS officer and some thirty soldiers from the regiment were serving with the SRU but were due to return to their parent unit.

Although it is clear that many of the functions performed by the SRU were ultimately undertaken by the Force Research Unit (except the FRU was operationally independent of the RUC Special Branch), it is by no means certain that a straight line connects them. Various other intelligence units, ranging from 14th Intelligence Detachment, aka ‘the Det’, and the Intelligence and Security Group (IntSyGp), followed the the SRU’s wake. But there is little doubt that the SRU was a precursor and inspiration for the creation, a decade later, of the Force Research Unit.

Here is the Wilson briefing along with a British Army Headquarters statement: 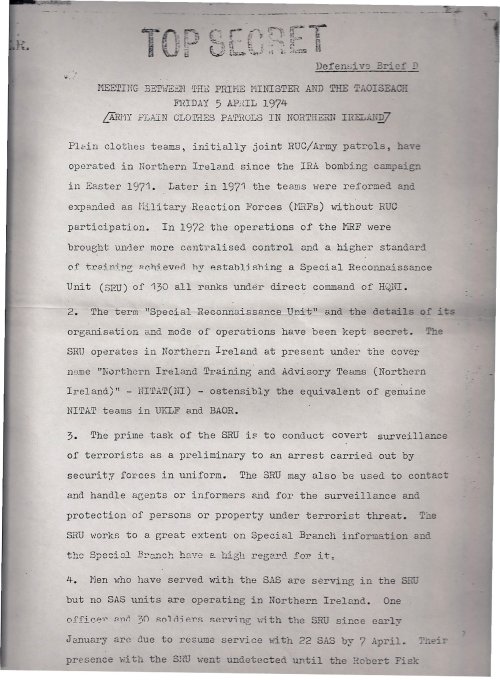 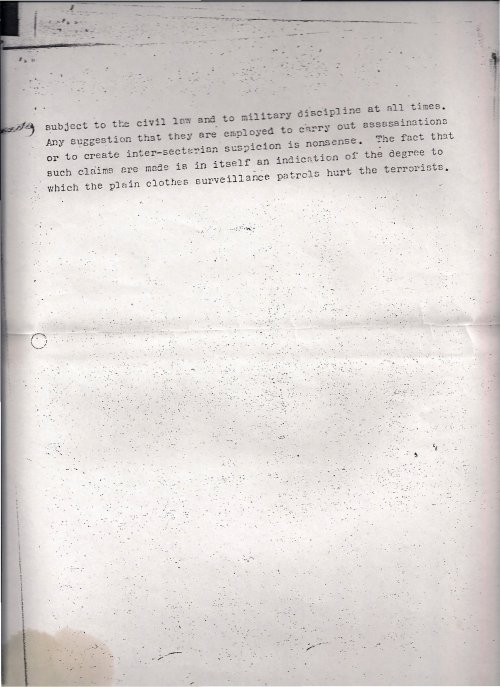 6 responses to “The Force Research Unit – How It Began”