A Note To Irish-America: Make Sure Promises Are Kept

The aftermath of Barack Obama’s re-election to the White House has brought speedy speculation about changes the victorious Democrat will make to his second-term Cabinet. According to The New York Times today, Hillary Clinton is likely to leave her job as Secretary of State (amid speculation she will prepare a run for the presidency in 2016) and the favorite to replace her is Massachusetts Democratic Senator John Kerry, who was an unsuccessful White House contender in 2004. Attorney-General Eric Holder, who has stubbornly pushed the PSNI subpoenas through the federal courts, looks like he will stay however.

It is far to early to take this speculation seriously, but should it come to pass then John Kerry should be reminded by Irish-America of the stand that he took on the PSNI demand for interviews from the Boston College archive way back in January 2012. Should he end up in Foggy Bottom the hope must be that he will put his most welcome words into action if he has the power so to do.

In this regard, Irish-America could do worse than follow the famous example set by the Skibbereen Eagle in August 1914, on the eve of war, when West Cork’s most celebrated newspaper told Kaiser Wilhelm that: “The Skibbereen Eagle has its eye on you”.

“The most prominent members of his cabinet will leave soon. Secretary of State Hillary Rodham Clinton and Treasury Secretary Timothy F. Geithner long ago said they would depart after the first term, and Defense Secretary Leon E. Panetta, previously the head of the Central Intelligence Agency, has signaled that he wants to return to California in the coming year. Also expected to depart is David Plouffe, one of the president’s closest confidants…..

“…….A front-runner for secretary of state appears to be Senator John Kerry, Democrat of Massachusetts, and Democrats said worries about losing his Senate seat to the Republicans in a special election had diminished with Tuesday’s victories. Another candidate has been Susan E. Rice, the ambassador to the United Nations, but she has been a target of Republicans since she provided the administration’s initial accounts, which proved to be wrong, of the September terrorist attack on the diplomatic outpost in Benghazi, Libya.

“While no one in the White House blames her, “she’s crippled,” said one adviser who asked not to be named discussing personnel matters. Another possible candidate, Thomas E. Donilon, the national security adviser, has told Mr. Obama he wants to stay in his current position, according to a White House official.

“Attorney General Eric H. Holder Jr., once expected to leave, now seems more likely to stay for a while.” 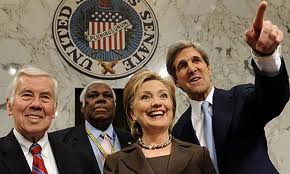 Hillary Clinton flanked by two supporters of the campaign to stop the PSNI subpoenas served on Boston College. To her left is her possible successor, Sen. John Kerry. To her right is Sen. Richard Lugar, ousted by the Tea Party in Indiana.

I write today with concern about the ongoing court efforts on behalf of the United Kingdom to obtain documents and recordings from Boston College’s Oral History Archive on the Troubles in Northern Ireland.

I know you’ll understand that this matter is of interest to me for a number of reasons. First, it has a profound impact on Boston College, a highly respected university in Massachusetts, as well as implications for the confidentiality of other research projects of this nature. More broadly, as Chairman of the Senate Foreign Relations Committee, I am obviously concerned about the impact that it may have on the continued success of the Northern Ireland peace process.

It is possible that some former parties to the conflict may perceive the effort by the U.K. authorities to obtain this information as contravening the spirit of the Good Friday Accords. I am proud of the role our government – and the Clinton Administration specifically – played to bring about that fragile peace. I am equally impressed by the courage and tenacity of the people of Belfast to rebuild their lives and their city. It would be a tragedy if this process were to upset the delicate balance that has kept the peace and allowed for so much progress in the past fourteen years.

Given my deep concern, I spoke to Attorney General Holder about this matter late last year. I fully recognize that the United Kingdom has invoked the provisions of our Mutual Legal Assistance Treaty and that this is clearly a factor which affects our flexibility dealing with such a request. Nonetheless, given the close relationship we have with the United Kingdom and the deep and enduring interest all of us share in seeing a lasting peace in Northern Ireland, I would urge you to work with the British authorities to reconsider the path they have chosen and revoke their request.

I would like to thank you in advance for your attention to this matter.

3 responses to “A Note To Irish-America: Make Sure Promises Are Kept”