It has been the accepted wisdom in Irish politics for almost as long as I can remember that when it comes to telling the story of their lives in the IRA that Gerry Adams is regarded as a brazen liar while Martin McGuinness is treated like a paragon of virtue and candour.

As far as the first part of that statement is concerned there is no contest. Gerry Adams’ contention that he was never, ever in the IRA has to rank amongst the world’s biggest whoppers ever, a veritable taradiddle in the pantheon of untruths. Almost as breathtaking as the cheek of Adams’ claim was his belief and assumption that somehow he’d get away with it. In fact he has paid a huge price for this fairy tale.

His attempt to distance himself from the IRA and what it did under his command so angered Brendan Hughes that he broke the IRA’s unwritten rule of omerta and told all, or nearly all he knew of Adams’ past history to researchers at Boston College. By so doing Hughes made Adams’ effort to rewrite his life a ludicrous sham. Similarly I very much doubt whether Dolours Price would have given an interview to the Irish News, and indirectly to the Sunday Life, about Adams’s role in the various ‘disappearances’ of the early 1970’s if she had not been maddened by the disavowal of his and therefore her life.

So when Martin McGuinness appeared in front of the Saville Tribunal on Bloody Sunday and admitted that he had been in the IRA and held a senior position in the Derry Brigade at the time of 1 Para’s killing spree, much of the media hailed his honesty and so was born one of the most enduring myths of the Troubles: Gerry Adams lies about his IRA past while Martin McGuinness tells the truth.

Thus when it comes to choosing Sinn Fein’s candidate for the Aras, all that puts McGuinness at a considerable advantage over his party leader. While Adams would be hounded by awkward and damaging questions from the media about his past, McGuinness can play the role of the honest paramilitary apostate, truthful about his past and now a changed man.

But what did Martin McGuinness actually tell Saville? Was it the truth or did he too lie? The answer can be found very easily on the web. Type Saville Inquiry into the Google search box, and when the Tribunal’s web page comes up click on the link to Contact Us and then go to Transcripts. Scroll down to Ts391, which stands for transcript of day 391, which happened to be November 5th – Guy Fawkes’ Day – 2003. There, on pages 137 through 141, you will discover what Martin McGuinness really had to say to Saville.

He was being questioned by Edwin Glasgow QC, counsel for the Paras who began this part of the cross-examination by asking McGuinness about the IRA’s “Green Book”, the organisation’s manual, for want of a better term. McGuinness’ answer is the first hint that his admission of IRA membership is very much time-limited, that he is ready to acknowledge membership in the days when the IRA’s campaign was part of a popular uprising but not later when it took on the characteristics normally associated with terrorism.

Asked what the “Green Book” is, McGuinness answers: “Well, I have been aware for many years that there has been a book, described as ‘The Green Book,’ which is the book which most IRA volunteers would read and would be guided by. I have to say, in 1972, whenever I was in the IRA, there was no such book.”

A little later on, more of the same: “….in 1972, whenever I was in the IRA, there was no such thing as ‘The Green Book’….”. And more again: “……you might find this surprising, but I have never read this book. This is the first time that I have seen extracts from the book.”

The creation of ‘The Green Book’ was a part of the re-organisation of the IRA that took place in the late 1970‘s and early 1980‘s. This all arose out of discussions in Long Kesh involving Gerry Adams, Ivor Bell and Brendan Hughes amongst others and was prompted by their perceived need to rebuild the IRA after the failed ceasefire of 1974/75. “The Green Book” set out the IRA’s aims, tactics and politics, included a copy of the organisation’s constitution and was required reading for recruits not least because it set out the penalty – death – for informing and for other transgressions. An IRA Volunteer accused of betraying secrets could avoid a bullet to the head if he or she could prove that they had not been “Green-booked”, i.e. instructed to read the document.

McGuinness’ claim that when he was in the IRA “The Green Book” didn’t exist led Edwin Glasgow to ask the obvious question. Here then is the exchange between Martin McGuinness and counsel for 1 Para on the question of the Derry man’s IRA membership:

Q. It may well be, sir, you had already left the IRA by the time this document in the form that we have it, came into existence. When did you leave the IRA?

A. Here we go again, on another trawl through the Martin McGuinness fixation.

Q. No, it is not at all, sir, not at all. May I just explain to you, because you have been very concerned, understandably, to be treated in the same way as the soldiers, and it is precisely the same question, word for word, as was asked, I think, of some seven or eight soldiers.

A. Were they asked when they left the British Army?

Q. Yes, simply because it was thought to be relevant to the way in which other people had reacted to what had happened on Bloody Sunday. You do not have to answer my question or any of them, I ask them, and I will not ask them twice, it is for the Tribunal to say whether you should answer them or not: I ask again, when did you leave the IRA, if you did?

Now Martin McGuinness could have taken up Edwin Glasgow’s offer and declined to answer that question, but he didn’t. Instead he chose to tell a lie. It may not be as flagrant as Gerry Adam’s lie to be sure; he didn’t say he had never been in the IRA (and given his infamous interview with the BBC’s Tom Mangold, he could hardly do otherwise) just that he’d been in it for only a short time. But it was still a lie and, given events between ‘the early part of the 1970s’ and the ending of the IRA’s war in 2005, a pretty darned big one. 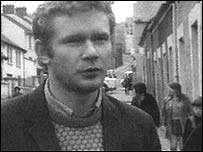 In a sentence his post-1972 career as Chief of Staff, twice Northern Commander and Chairman of the IRA’s Army Council (during which times he would have been on familiar terms with “The Green Book” and those who had ignored its warning to putative informers) was simply washed away and with it all the things he is alleged to have done while holding down those jobs.

It will be interesting to see how the media treats all this as the campaign for the job in Phoenix Park hots up.

UPDATE: In today’s Irish Times, a Sinn Fein spokesperson is quoted thus: “We are not naive political operators. Martin has never run away from his past, and he took the lead in terms of republicans facing up to the legacy of the past.”

How does that statement square with what McGuinness told the Saville Tribunal?

5 responses to “Martin McGuinness – Some Questions To Ask & Answer”