Mississippi Fats – A Story Of America 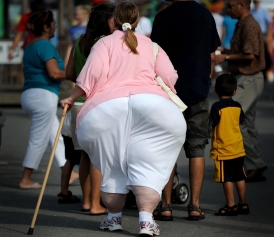 The woman in this photo is from Mississippi, which recently was found to be the fattest state in America – and that’s some going. Nearly thirty-five per cent of the people in Mississippi are classified as obese and this in a country that is overwhelmingly fat. A report published last week by the Centers for Disease Control estimated that 73 million people, or 34 per cent of the population of the US of A are obese.

Nine of the ten fattest states in America are in the South and it is no accident that they are also the poorest states in the Union. Being poor does not just mean that people are not well educated and therefore ignorant about which food is best for their health. It means they just can’t afford to buy decent, healthy food or don’t have the opportunity to access cheaper, high-quality produce because they live in places where farmers’ markets exist only on TV shows.

The reason why fast food outlets like McDonalds do so well in this country is that they sell bad food cheaply to poor people. A huge proportion of Americans buy and eat their evening meals at places like Kentucky Fried Chicken because it is cheaper than buying good food in supermarkets and cooking at home. And in families where people hold down two or more jobs just to keep going it is also easier and more convenient to go to KFC than to spend the evening in a hot, small kitchen after a hard day’s work.

The reason why the food at places like KFC is cheap is not only because it is of poor quality but because the regulatory authorities allow such companies to buy their produce, like chickens, filled with growth-stimulating chemicals that are reared in unhealthy, overcrowded animal factories. That keeps the unit cost low and therefore the price to their poor customers – but it means that people are also all eating those disgusting and harmful chemicals that were fed to the animals.

The regulators, in this case the Food and Drug Administration (FDA,) have, like their counterparts on Wall Street, been encouraged to relax health regulations because that is good for sales and profits. The deregulatory craze which first hit America in the Reagan years and was then absorbed into the political mainstream, Democrats and Republicans, and which has now driven the country to the brink of a devastating economic recession has also had a catastrophic effect of the quality of American food, in turn significantly worsening the health of her people.

The woman in that photo doesn’t look that old, albeit seen from behind, but in a few years her joints will collapse as arthritis rages through her body and she will not be able to walk or work. The fact that she uses a cane to get around is evidence that may be happening already. The strain on her heart from carrying all that weight will soon be unbearable, as it will be on all her vital organs and it is likely that she will suffer an early death.

Before that she will probably endure very bad health which will be extremely costly to pay for – those drugs, thanks again to the FDA’s relaxed, pro-business attitude to the renewal of drug companies’ licences on products, do not come cheap and nor do the disabled carts you see everywhere in America, not least at Tea Party rallies, carrying outraged ‘patriots’ as they assail Obama’s ‘socialism’ and sing the praises of Sarah Palin!

The health insurance companies, thanks to Obamacare, will raise their premiums more and more each year (in 2011 I pay more for my own single insurance than I did in 2001 for a family of three), increasingly putting health care beyond the reach of more and more Americans. The absence of a public option in Obama’s health ‘reforms’ means there is not even a modicum of socialised medicine to compete with private health insurance. (If Obama had done that he would have provoked the rage of the health lobby and his fundraising for 2012 would have suffered. The lobbyists, in health, banking, oil and so on own politics in this country) As people like this woman retire their health costs will soar, putting pressure on Washington politicians, as is happening right now, to cut back on schemes like Medicare rather than raise taxes on those who are well off and healthy, the people who fund their re-election campaigns.

More and more people will either have to pay more for health care or do without which means that poverty will increase, which means that food quality will continue to be poor and may even deteriorate more, which means that health care will continue to deteriorate. America, or at least the bulk of it, is headed in an accelerating downward spiral towards misery and destruction with politicians like Barack Obama playing the Pied Piper, playing tunes of hope and change to the crowds that gaily follow them but offering none in reality.
One group of people in America will not have to live this nightmare. They are the one per cent who own 24 per cent of the wealth and growing, and whose political representatives in Washington, both Republican and Democrat, are as I write this, making it possible for that 24 per cent share to head ever upwards by cutting back on health care, social security and other public spending while refusing to sanction tax increases.

The story of America can be told in that photo of a fat woman in Mississippi. There are some who say that America deserves the wretched end that is coming. Others who say it cannot come fast enough.

8 responses to “Mississippi Fats – A Story Of America”